Dodgers 3, Red Sox 2 – World Series Game 3: After 18 grueling innings, Max Muncy gets the Dodgers back into it 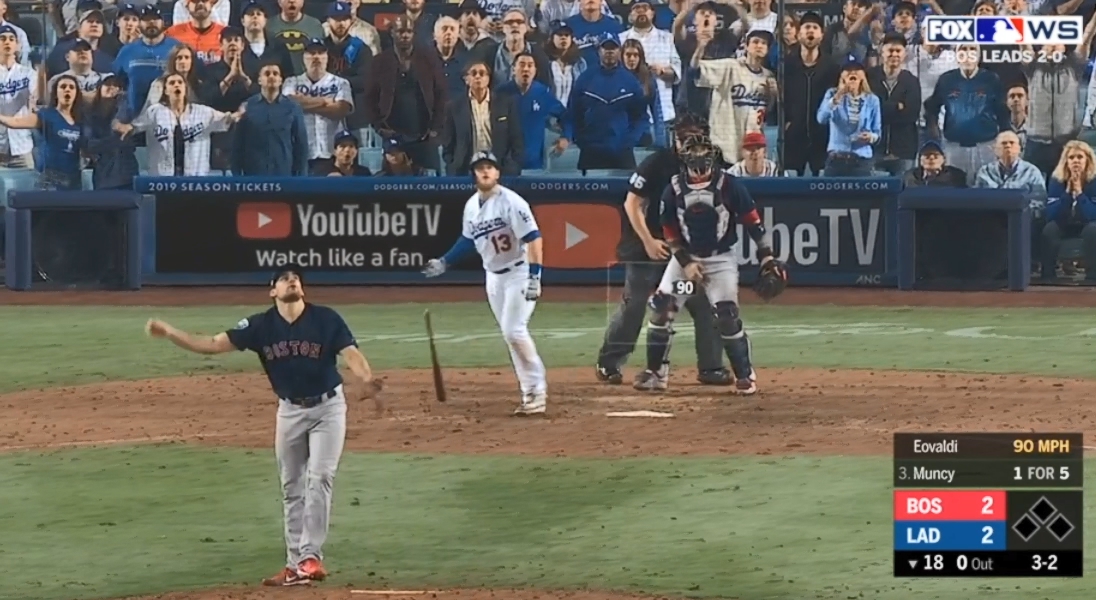 The Dodgers entered Game 3 of the World Series in almost as much of a must-win game as could be, as the Red Sox had taken the first two games back in Boston. Now in friendlier confines, the Boys In Blue hoped to get back on track, and the game ended up being a low-scoring nail-biter throughout. Eventually it went deep into extras, and at one point they even exchanged runs thanks to defensive boners, but in the 18th inning Max Muncy finally walked it off.

The game was long, folks.

The longest game in playoff history is over. Max Muncy took Nathan Eovaldi out to left-center field. After 7 hours, 20 minutes and 18 innings, the Dodgers beat the Red Sox, 3-2.

After coming up big in key game after key game down the stretch for the Dodgers, Walker Buehler surprisingly struggled in his first two playoff starts. However, he came up with a big start in Game 7 of the NLCS against the Brewers and that seemed to get him on track.

After cruising through the first six batters, the bottom of the order got to Buehler, which is how it has been for the Dodgers throughout both the World Series and the NLCS. Jackie Bradley Jr. managed an infield single but was erased while trying to steal, then Christian Vazquez singled and got to second on a sacrifice bunt by Rick Porcello. Thankfully, Buehler escaped the jam by getting Mookie Betts to fly out.

But, um … well that was it for the Red Sox offense. Buehler then retired the next 12 hitters to take him through seven shutout frames. He threw a career-high 108 pitches, allowed just the two singles in the 3rd, walked none, and struck out seven. 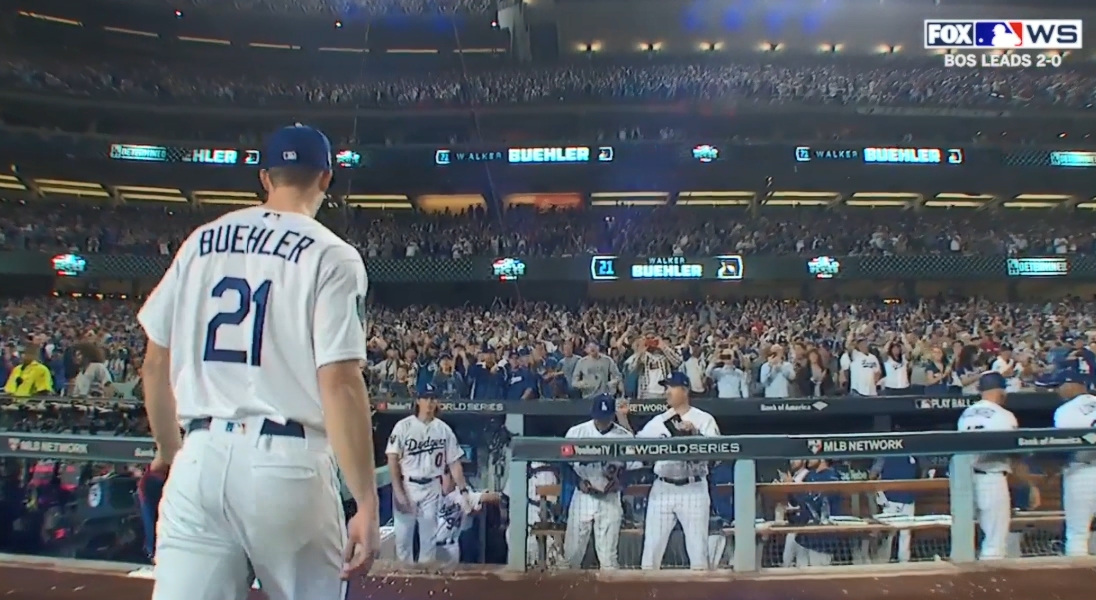 Of course, the problem for the Dodgers since the NLCS started (and the whole season at times, really) has been the inability of the offense to consistently score runs. Much of the same was the case tonight, as Porcello really didn’t have his best command and the Dodgers didn’t do anything to punish him.

That said, they did get on the board with two down in the 3rd thanks to Joc Pederson yanking a terrible changeup left in the middle of the plate for a 1-0 lead.

Justin Turner then doubled to threaten, but Muncy flew out to end it. That was sort of a theme, as Porcello was leaving balls right in the middle of the plate and the Dodgers just couldn’t hit.

Porcello has been pumping a ton of fastballs right down the middle. The Red Sox have figured it out.

After giving up a single in the 5th and then getting two outs, Porcello’s struggles with giving the Dodgers hittable pitches is likely why Alex Cora was so quick to give him the hook. Eduardo Rodriguez was brought in to finish up the inning and he did exactly that.

That would immediately cost the Dodgers in the 8th, as Dave Roberts went for the kill by bringing in Kenley Jansen in the 8th. Jansen started well by getting a blooped fly out to left and a strikeout, but then threw a 2-0 cutter in the middle of the plate and Bradley smashing a towering homer to right to tie the game, 1-1. Jansen then got a pop out to end the frame, but the damage was done.

Apparently there was controversy over bringing Jansen in an inning earlier than normal, because people wanted Pedro Baez instead, but it’s hard to argue that going with your closer on five days rest after he has looked lights out in the NLDS and NLCS in terms of both velocity and movement to secure a must-win game was the wrong move. Much less that it was a managerial error that led to said closer giving up a homer to a .717 OPS hitter in 2018 on his 14th pitch of the night. Seems like pure hindsight bullshit.

Anyway, Matt Barnes entered in the 8th for the Red Sox now trying to preserve a tie, and while he allowed a single, the Dodgers didn’t get anything else. Kenley then continued in the 9th for LA, getting a 1-2-3 frame that included a strikeout.

In their half of the 9th, Roberts had a bit of a disaster. Game 2 starter David Price entered and Cody Bellinger started with a single, but Yasiel Puig flew out to right. With Yasmani Grandal batting and working a 3-2 count, Bellinger got picked off first for the second out, and people need to remember sometimes small-ball stuff works out like that as well. Of course, Grandal then walked, which brought in Craig Kimbrel. Chris Taylor then managed to work a walk to put runners at first and second, which seemed like a prime chance for David Freese, a high-average, line-drive hitter that’s red-hot right now. Instead, Roberts went with Brian Dozier, a low-average, fly-ball hitter, and I have no fucking idea why. Dozier popped out to the catcher to end the threat.

HOW IS THIS NOT DAVID FREESE

Baez eventually took over in the 10th, and he had yet to give up a run in the postseason. Regardless, he found himself in trouble after issuing a one-out walk to J.D. Martinez and then gave up a lined single to Brock Holt on a hit-and-run to put runners on the corners with one out. Eduardo Nunez then pinch hit and Pedro got him to fly to shallow center, which was enough for pinch-runner Ian Kinsler to chance it, but Cody came up with an excellent throw to Austin Barnes, who put on the tag to end the inning and keep the score knotted.

Kimbrel then continued in the 10th and he coasted through the two first batters, butMuncy then ripped a double down the line in right to give the Dodgers another shot. However, Manny Machado couldn’t manage to get anything done, which I guess shouldn’t be surprising at this point, as he popped out to short.

Baez rather surprisingly continued in the 11th, which kinda shows how this was basically a must-win affair. He notched a strikeout, a ground out, and a fly out to move things along. That brought on Heath Hembree for the other half of the 11th, and while he issued a walk, nothing ended up coming from it.

Ryan Madson then entered in the 12th, showing trust in him despite disasters in Game 1 and Game 2, and he rewarded Dave by getting a comebacker and throwing just two pitches. Scott Alexander then entered and shut things down with a strikeout and then a comebacker. Nathan Eovaldi then entered for the Red Sox, and he was supposed to be the Game 4 starter, so I’m not sure what’s going to go down now. Well, it was easy enough for him in a 1-2-3 frame.

Alexander then continued in the 13th, getting ahead 0-2 but then issuing a frustrating walk to Holt, who then stole second. Alexander seemed to rebound by inducing a weak tapper back to him that he fielded cleanly, but for some reason Muncy took himself out of the play by charging in and the covering Hernandez bizarrely slid into the bag. That caused him to whiff on a perfectly good toss from Alexander, which led to the go-ahead run scoring to make it 2-1. Dylan Floro then entered, and while he gave up a double and issued an intentional walk, he did also get a strikeout and tapper just in front of the plate to avoid further mess.

The @RedSox are RUNNIN' WILD. pic.twitter.com/HpBjUvPriP

Eovaldi then continued on in the 13th, attempting to end the game. The Dodgers were provided some hope when Muncy drew a walk to start, but Manny flew out to left and Bellinger fouled out to third. However, that out came with Nunez flying into the stands after the catch, which put Muncy at second. That proved key, as Puig hit the ball decently hard up the middle and this time it was Kinsler’s turn to have a bizarre one on defense as he got his feet mixed up and rushed a throw that ended up well wide of first. This allowed Muncy to score the tying run easily to tie the game at 2-2. That said, the Dodgers were still unable to walk it off.

Floro continued in the 14th and came up big with two strikeouts and a fly out in a 1-2-3 frame. But despite a single, the Dodgers couldn’t get anything done against Eovaldi in their half. That led to Kenta Maeda entering for the 15th, and he started by allowing an infield single to Nunez on a ball that Freese actually interfered with Muncy on by cutting in front of him. Kenta then issued a walk to Bradley, which really got him in trouble, but a sac bunt attempt was fielded nicely by Maeda and he got the lead runner at third. A strikeout followed to put Kenta on the verge of getting out of the mess, and he ended the threat by getting Betts looking.

Unfortunately, Eovaldi was still out there and he ended up with another 1-2-3 frame in the 15th. Granted, it wasn’t quite the typical one since Muncy came within a couple feet of walking it off.

Maeda then cruised through the 16th, getting a 1-2-3 inning and striking out the side. But Eovaldi responded yet again with his own 1-2-3 frame. That brought in Julio Urias for the 17th, who walked a batter but got out of the inning without much drama. Eovaldi, now undead or something, continued on and shut the Dodgers down again in 1-2-3 fashion.

Unfortunately, the pen was left with Alex Wood for the 18th. But while things started ominously with a walk, he then got a ground out and then double play to face the minimum and keep the game tied.

With Eovaldi still chugging along, the 18th had a rematch of the 15th, when Muncy led that inning off and barely missed walking it off. Well this time he didn’t miss, as he took a backdoor 3-2 cutter and drilled it over the left-center field fence for a walk-off dong and a 3-2 victory.

Guess there is a Max for how many innings will be played tonight. pic.twitter.com/prBS1luHfK

A celebration 18 innings in the making. #WorldSeries pic.twitter.com/6uaOShLx8u

The Dodgers are kinda back in this now.

i imagine this will get deleted but lol pic.twitter.com/32BoaVBqAA

Let's check the status on the broadcast since I've listened to this entire World Series on mute and … ah. https://t.co/D61ZFgSRqu

Dave Roberts instructing his players to use analytics again. pic.twitter.com/1gSZndopv7

Well well well, the World Series is competitive again at 2-1, with the Red Sox leading the Dodgers. Game 4 tomorrow will start at 2:09 PM HST/5:09 PM PST/8:09 PM EST. Neither team has announced their starter, which is … interesting.