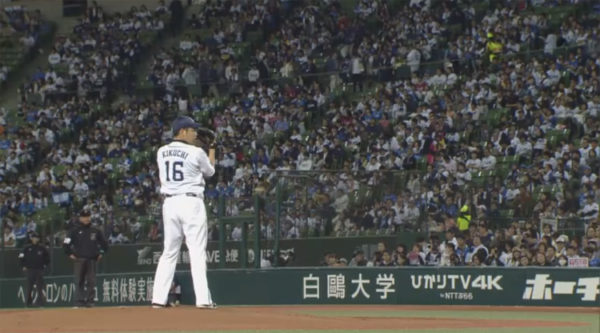 The first thing that strikes you when watching Yusei Kikuchi pitch are the similarities to Clayton Kershaw. Not in the quality of their pitches, but the way in which they attack hitters. Both pitch with their left hands, but it goes beyond that.

According to the NPB sabermetrics site DeltaGraphs, Kikuchi threw his fastball and slider a combined 83.3% of the time in 2018. For Kershaw, that number was 83.0%. Kikuchi’s arsenal is filled out with a big curveball that is about 18 mph slower than the fastball. Kershaw’s velocity separation is almost identical. Kikuchi will also toy with a change, throwing it about 5% of the time but not relying on it to get batters out. Before his home games in Saitama, he even warmed up to the song “We Are Young“.

Sound familiar? It’s more than skin-deep. According to this profile by Dylan Hernandez of the LA Times, Kikuchi idolizes Kershaw:

Kikuchi, a left-hander with the Seibu Lions, watches the Dodgers on television every five days — whenever Clayton Kershaw starts. “He’s the pitcher I like the most,” Kikuchi said in Japanese.

Perhaps Kershaw isn’t the only Dodger that Kikuchi emulates. He has a bit of Rich Hill in him, too:

Kikuchi also loves studying his Trackman data, making him a potential good fit with the Dodger front office. Walker Buehler and Ross Stripling have discussed how data has helped them improve as pitchers, and it seems like Kikuchi is open to it as well.

As the Seibu Lions prepare to post Kikuchi later this week, it’s worth taking a look at his arsenal beyond superficial comparisons and fits to see how his skills would translate to MLB.

Kikuchi’s best pitch, by far, is his slider. When right, the pitch is absolutely devastating, as shown by some of these highlights from 2017:

Just look at it:

Kikuchi also has the ability to change the shape on the pitch, giving it more cut or velocity. Occasionally it has depth and velocity, as shown above. Remember the Warthen Slider? Sometimes it’s like that.

Kikuchi also has a fastball which has flashed above-average in the past, particularly in 2017. On days when he’s throwing less hard, the fastball has some natural cut, making life especially difficult for left-handed batters. Here is another video (which also highlights some of his other pitches) from 2017. The velocities are blurred, but he touched 98 mph in this start, which broke the NPB record for velocity by a left-handed Japanese pitcher.

These videos show a glimpse of Kikuchi’s upside. When all went right, he was one of the best pitchers in Japan. In 2017 he struck out 30% of the batters he faced and posted a Pacific League-best 1.97 ERA in 187-1/3 innings. Stuff-wise, he was at least the equivalent of a number two starter in MLB, if not a bit better.

However, Kikuchi’s posting is somewhat poorly timed, as he took a step back in 2018. His average fastball velocity backed off from 92.3 mph to 91.5 mph. His strikeout rate dropped over 6% to a more pedestrian (but still good for NPB) rate of 23.4%. Thanks to an increase in ground ball rate his ERA remained in the low 3s in the face of a potentially juiced baseball. Overall, not terrible, but not matching the potential he showed the year before.

Kikuchi’s velocity drop did not necessarily come without warning. He missed most of May with a mysterious case of “shoulder tightness.” The specific cause of the tightness was never really clarified (at least on English-language NPB websites). In the starts after his return, he struggled to hold his velocity throughout outings, sitting at about 93 in the early innings and fading towards 90 by the end of those stints. In the later months of the season the velocity returned, but the strikeouts never really followed.

The shoulder scare raises questions about Kikuchi’s durability. He made it through 2017 in good shape, but he has missed significant time in several other seasons. His shoulder was a concern in 2013, he missed time with finger blisters in 2014, and some of 2016 due to a “right side” injury. He missed the first few years after he was drafted with even more injury trouble. Another look at the previous video clips shows a high-effort delivery, adding to potential health concerns.

Some videos from 2018 show how his stuff looks now:

The slider looks extremely sharp at times, but has flattened out a little more often. The stuff is still very good, just not as consistently eye-popping as it was in his breakout 2017.

Even without the health scares, and even if you assume the stuff will look more like 2017 than 2018, Kikuchi has some flaws. His command is ordinary, instead relying on the power of his pitches to get batters out. Additionally, the curve has good velocity separation from the fastball but is a bit loopy out of his hand, making it easier for batters to pick up. Sometimes he adds a bit more to the pitch, which definitely helps when he can keep the ball down. He’ll need to do this more consistently in MLB than he did in Japan:

Kikuchi’s change has good movement and a very good 12 mph speed differential from the fastball, but it is inconsistently used and spotted. He will need to further develop either the curve or the change in order to make it through an MLB lineup more than twice. If he can’t do that, he may be destined for the eighth or ninth inning, where his arsenal has the potential to play very well.

Overall, Kikuchi presently profiles somewhere around a number three to number four starter. He’s closer in ceiling to Kenta Maeda than Masahiro Tanaka or Yu Darvish. He has the upside to be a number two starter, though concerns about his health and history will probably keep him from cashing in as heavily as some of his previously-posted predecessors. Even so, pitchers with Kikuchi’s potential don’t often hit free agency as young as 27, and plenty of teams could use a starter with that sort of upside.

Kikuchi’s fit on the Dodgers feels a bit nebulous until Hyun-Jin Ryu makes a decision regarding his qualifying offer. If Ryu accepts, the Dodgers will have a rotation that is already about nine pitchers deep in Kershaw, Ryu, Buehler, Hill, Maeda, Stripling, Alex Wood, Julio Urias, and Caleb Ferguson. Kikuchi’s ability can be appealing if you see him on the right day, but the Dodgers likely wouldn’t be able to find room for him to pitch barring a trade or two, which is always possible with this front office.

Some of the above videos make it seem like signing Kikuchi is a no-brainer. However, his step back this year will make some teams hesitate. Even so, somebody is going to bet on that talent, especially the slider which should play well in MLB. Given Kikuchi’s sources of inspiration, it would be extremely fun if that team is the Dodgers.

Daniel Brim grew up in the Los Angeles area but doesn't live there anymore. He still watches the Dodgers and writes about them sometimes.
@danielbrim
Previous Bryce Harper and the Dodgers are a perfect match
Next Clayton Kershaw is a step closer to remaining a Dodger for life, so buy this shirt to motivate us to continue as well