Clutchitude: The Least Clutch Plays Of The 2013 Dodgers Season 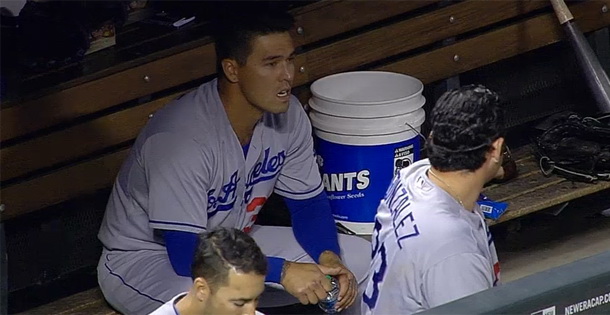 Last time around, we covered the most clutch plays of 2013, and you know I had to do the opposite end of the spectrum as well. Because, quite frankly, that can be more entertaining.

The same statistics and disclaimers from the last post still apply here.

We all remember this, right? Of course we do. And if WPA is supposed to reflect not skill but just the gut feeling you get as you watch the game, then this legitimizes the stat. Because it was soul-crushing.

And while Skip Schumaker made the list twice, his appearances were five months apart … Michael Young almost made it on twice in one playoff game.

…something Skip Schumaker is also hoping you believe.

Yes, two strikeouts in consecutive at-bats in the last game of the season made the list. Impressive.

Seeing the trend with the bases loaded down by one thing? Yasiel Puig hit into a game-ending force-out here, but hard to blame him too much since he at least hit a grounder/liner … glinder? Lounder? Whatever.

Just sucks that it had to come against Sergio Romo and the Giants.

This one is not even Skip’s fault (besides him not being able to hit), it’s really A.J. Ellis for trying to score with his square wheels. But at the time, I probably wasn’t even mad just because of the humor in how much he was thrown out by.

Yes, Yasiel Puig was the most unclutch Dodger of 2013, don’t tell the mainstream media. Seriously though, it’s probably because he tries to do too much in those situations. On the flip side, he also had some of the most clutch plays of 2013, so it goes to show the non-predictive nature of this metric. Whatever he did, the spotlight was always finding him in 2013.

Through this section, you get to see why the Dodgers struggled until late-June came around.

I mean, the look of helplessness and depression on Brandon League’s face as he watches the ball trickle up the middle while Nick Punto grits it into a two-run infield single is just timeless.

That was about my reaction at the time.

Worse yet, it’s this homer and the Andrelton Simmons one that followed which led Justin Upton to declare that he had the scouting report on Jansen from his time with the Diamondbacks.

I can’t even get mad at this. Travis Snider just destroyed it.

You will almost never see a situation here on lists like this from before the 8th inning, but Paco Rodriguez managed to earn his slot due to a 6th inning pitch that resulted in a grand slam to Justin Upton.

An accomplishment in a way.

I think this was the homer where a lot of my timeline on Twitter switched from rage and hate toward League to some type of catatonic state where everybody just accepted that these things happen when League enters the game. I was basically the same as well.

The progression was really amazing to witness.

Clayton Kershaw was a surprising inclusion because he’s both an elite pitcher and a starter. But him being so good is probably the reason for his negative clutch rating, as anything less than plus-plus performance would be counted as unclutch for him.

As for the rest, Ricky Nolasco is well known for not performing well with runners on and/or runners in scoring position, so neither his 2013 or his career numbers are surprising. And anybody who watched Ronald Belisario and Javy Guerra pitch isn’t surprised that they led to much depression.