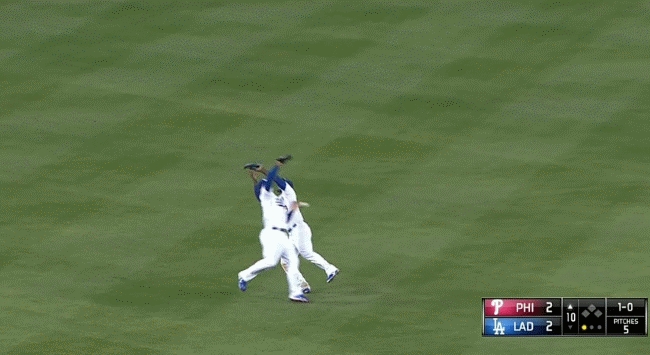 Losing always sucks, but it’s especially terrible to lose like this. In extra innings. On a routine flyball.

Sure there were lots of other chances to win, as the Dodgers finished 1-for-8 with RISP. But if that catch is made by Carl Crawford or Hanley Ramirez, the game is at least still going with the Dodgers having the sudden death advantage.

But they didn’t, and that ginormous fail looked like this:

If we’re assigning blame here, the only reason Hanley went out that far to begin with is because CC didn’t seem to get a read on the ball and was late breaking in. But really, there’s no excuse either way.

Dom Brown followed that blunder with a double and the game was over because the Dodgers can’t hit. Sure, Yasiel Puig‘s single brought the winning run to the plate, but Hanley “I’m Totally Healthy” Ramirez popped up weakly to the second baseman to end it.

-Puig and Dee Gordon had the only multi-hit games. Puig also notched a double and Gordon was electric, turning a single into a double and stealing two bases.

–Carl Crawford is being protected by a platoon and his OPS is now .542. Just saying.

-Hyun Jin Ryu didn’t have his best stuff, but he limited the Phillies to two runs on nine hits over six innings.

–Chris Withrow, Brian Wilson, and Kenley Jansen combined for an almost perfect 7-8-9, with only a hit allowed along with four strikeouts.