Where Did The Dodger Offense Go? 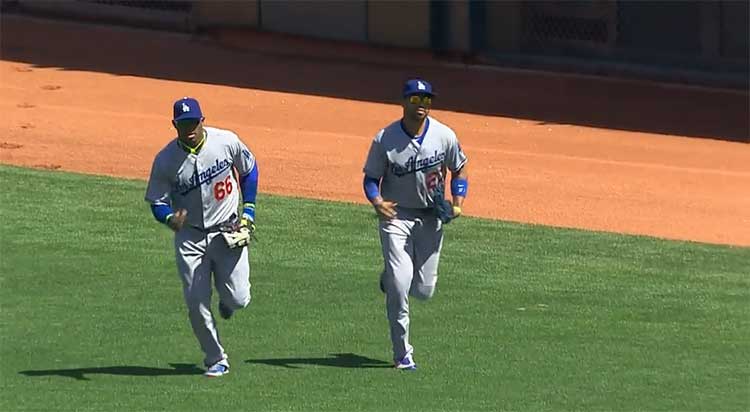 Much is being made of the lousy Dodger defense, thanks to last night’s Hanley Ramirez / Carl Crawford poptastrophe that helped lead to an extra-innings loss to the Phillies. That was ugly, and I can’t say I’ve been thrilled with the defense either at shortstop or in the outfield, but most numbers rank the Dodgers as being average to somewhat above overall, so I’m not going to fret about it too much. (Or at the least, I’ll just stare lovingly at Juan Uribe‘s throwing arm, which is a thing 2012 Mike would have died over had he known 2014 Mike would be writing it.)

While the defense is not an issue to be ignored, I think we’d all be noticing it a lot less if the offense was producing to the level it is capable off, because then we’d stop seeing what appears to be constantly tight extra inning games. And make no mistake, the offense is not where it should be. I mean, here’s how they currently rank in team wRC+:

Looking at the team stats, a few things pop out straight away:

So you can take a few things away from that:

** Van Slyke has been impressive in limited time, though no one should put undue importance on 27 plate appearances. Still, as we’ve seen all too well, there are exactly zero situations where he shouldn’t be allowed to face a lefty in a big situation while Crawford does. Ever.

** Gordon has been excellent, as I wrote recently, and there’s still no way that regression isn’t coming for him, so others are going to need to step up as he slows down.

** Gonzalez has been fantastic. Uribe probably isn’t getting enough credit, which is too bad, because there’s no way a high-BABIP, no-walk approach is going to last indefinitely.

** I don’t care how much Ramirez says his hand isn’t bothering him, he has two hits in 22 plate appearances since being hit.

** Kemp & Puig have been… weird. I can’t look at either and really say I’ve been all that impressed, especially with Kemp, but neither have really been the huge offensive problems on this team, either. Kemp’s BABIP simply has to rebound, and that will at least make his batting average look less than terrible. Puig’s thumb certainly didn’t help, and I would argue that with everything else that surrounds him he really needs to be productive to overcome it. Still, he was never, ever going to match his early splash from last year, and I’m not going to panic on a 124 wRC+.

** Ethier & Crawford have both been awful, and that’s probably the biggest problem on this team right now. As usual, neither should ever be allowed to face a lefty — in 25 plate appearances, they’ve combined for two walks and a single. But neither have really done much against righties, either. I’m inclined to believe that it’s a sample size issue, because they’ve each had long histories of success against righties, and both have lower-than-average BABIPs.

** The catching spot is still an absolute train wreck, and while Ellis is on his way back, I’m wondering how long they can let this go on. It’s been so bad that even though I’m still telling people that Miguel Olivo‘s .396/.448/.698 small-sample line in Albuquerque is a mirage — and it is — I can’t put a lot of heart into it. The Butera / Federowicz combo is that bad. I have no idea if the Dodgers are in on San Diego catcher Nick Hundley, who is reportedly on the market, but you understand why people want to know if they are. This is untenable.

** Down in the minors, Guerrero is hitting .467/.568/.900, and Joc Pederson is at .417/.523/.736. For the millionth time, small samples and Albuquerque offense still apply to the conversation, and in Guerrero’s case, the questions have always been more about his defense than his offense. With Gordon still producing, there’s no reason to rush him. Pederson is all but certainly ready now, there’s just nowhere to put him, is there?

If none of that happens over the next few weeks, and if this team keeps striking out like crazy, then maybe you make some moves. Guerrero is probably coming up at some point in the near future anyway. For now, it’s more disappointing than it is truly crushing.