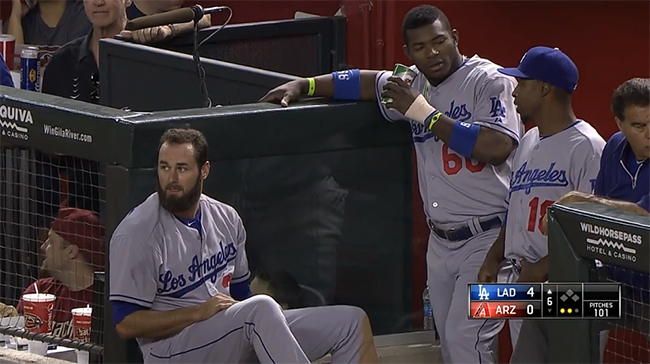 After nearly a month’s break, the Dodgers picked up where they left off against the Diamondbacks in Arizona, winning by a score of 7-0.

The game started a bit slow and frustrating, as the Dodgers’ bats failed to cash in on three walks in the first two innings. Yasiel Puig then woke up the Dodger offense against Wade Miley with a solo shot in the third. I’m not a huge fan of citing hitting streaks, but Puig now has a hit in fifteen straight games and has extra-base hits in eight straight games. Good lord. He added a single and a double tonight, raising his season wRC+ to 187. If it wasn’t for Troy Tulowitzski being ridiculous, we’d probably start hearing “MVP candidate” type talk for Puig. He’s been that good.

In the fourth inning, Scott Van Slyke doubled and A.J. Ellis drove him in with a bloop single. Zack Greinke then doubled to the right field gap, somehow scoring Ellis from first. After a single later in the game, Greinke’s 2014 batting line is up to .250/.333/.438. That’s good for a 119 wRC+. That’s still behind last season’s pace, but it’s fun to keep up with.

Van Slyke added a bomb to dead center in the sixth for his sixth extra-base hit (and third homer) against Miley this year. The homer traveled 454 feet, surpassing Puig’s shot in Miami for the longest Dodger homer of the year thus far. Miley exited after six innings. He allowed four runs while striking out three Dodgers and walking three more. The Dodgers have now scored 12 runs against Miley in 16 innings so far this season.

Greinke backed up his success with the bat with success on the mound, though in a different way than usual. He gave up no runs and five hits in eight innings. He struck out six and walked two batters. He wasn’t able to match his 22 swinging strike performance from last week, only inducing nine tonight. However, he forced the Diamondbacks to keep the ball on the ground (68% ground ball rate) and generated mostly weak contact. It’s hard to complain much about that. Greinke’s streak of starts allowing two runs or fewer is now 21 games long, matching his uniform number.

The Dodgers scored three runs off of the Diamondbacks’ bullpen, and Brian Wilson got some work in the ninth inning. His velocity was higher than it was during Wednesday’s rout, closer to his normal average velocity of 93-94. Wilson walked one batter but made it through the ninth inning otherwise unscathed.

The win pushes the Dodgers’ record against the Diamondbacks this season to 8-1. Tomorrow’s game starts early; Clayton Kershaw will face Chase Anderson at 5:10 Pacific time.

Daniel Brim grew up in the Los Angeles area but doesn't live there anymore. He still watches the Dodgers and writes about them sometimes.
@danielbrim
Previous Dodgers @ Diamondbacks May 16, 2014: Zack Greinke Is Good At Baseball
Next Dodger Outfield Is A Problem Only If You Hate Great Production