Dodger Outfield Is A Problem Only If You Hate Great Production

Andre Ethier probably isn’t thrilled about not playing every day. Carl Crawford likely feels the same. Scott Van Slyke, no doubt, wishes he was more than a part-time player. We can assume Matt Kemp is happy he’s been anointed the every day center fielder, but less happy that he had to fight for it. Joc Pederson would like to be in the big leagues. Yasiel Puig probably hasn’t given it a single damn thought whatsoever. Don Mattingly is all but certainly sick of the entire issue.

Yes, there’s something for everyone to hate as far as the fact that the Dodgers have too many outfielders for not enough spots. Everyone, that is, except for us, because for all the months and months of endless “this will never work!” worrying, it’s well, working. A lot. To the point that the Dodger outfield is the most productive offensive group in the game this year: 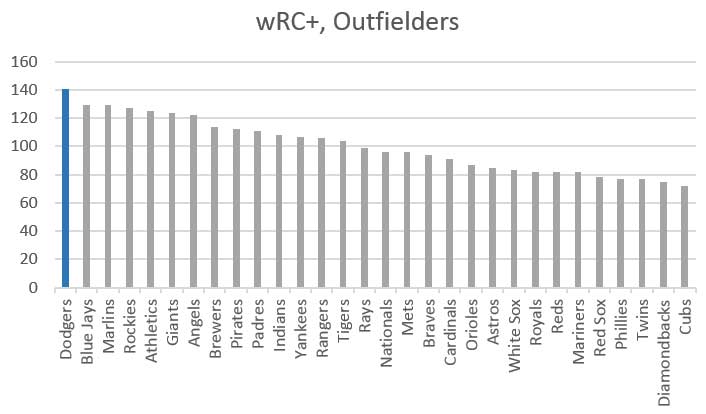 Maybe, some would say, it really ought to be this good, considering how much talent and money has been accumulated here. Maybe. But as we’ve learned time and again, dollars don’t always equal production, and considering how much hand-wringing has gone on about the situation, someone who doesn’t watch the team regularly might assume that the whole thing was a disaster.

Needless to say, it hasn’t, and that’s been particularly the case this month. Were I to rerun that chart for May only, the gap would be 179 to 137 for the second-place Marlins, as opposed to the 141 to 129 lead it is currently. In last night’s win over Arizona, Puig and Van Slyke combined for five of the team’s 10 hits and both of their homers. The team has 15 dingers this month; the outfield quintet has 10 of them. (And Drew Butera has two. Arbitrary endpoints, I know.) I mean, just look at this production in May:

Everyone is producing, which is wonderful on a team that seen Juan Uribe miss time, Adrian Gonzalez slump terribly, and Hanley Ramirez fail to click into gear as we’d hoped. Again, small samples; none of those guys save for Van Slyke has a prayer to maintain those BABIPs for very long. But really, it’s not just May; over the last calendar year, only Trout has a superior wRC+ among outfielders than Puig does.

Everyone might not be happy — let’s be honestly, everyone is almost certainly not happy — and good on Mattingly for keeping that in check. As always, I’m not at all against a trade of one or more to add value elsewhere, if the terms of a deal make sense. (Everyone hates it when I say that Pederson will make his debut on August 1 as a member of the Rays, having been traded as part of a package for David Price, but you just wait.) But for production like this, with Puig proving he’s a superstar, Kemp at least providing value after the disaster of his last two seasons, with Crawford and Ethier hopefully making their odd platoon work, with Van Slyke proving his value as a bench/1B/OF type, this situation isn’t a problem. It’s a strength.

Mike writes about lots of baseball in lots of places, and right now that place is MLB.com.
@mike_petriello
Previous Dodgers 7, Diamondbacks 0: Van Slyke and Greinke Lead The Way
Next Dodgers @ D’backs May 17, 2014: Another New Starter To Face