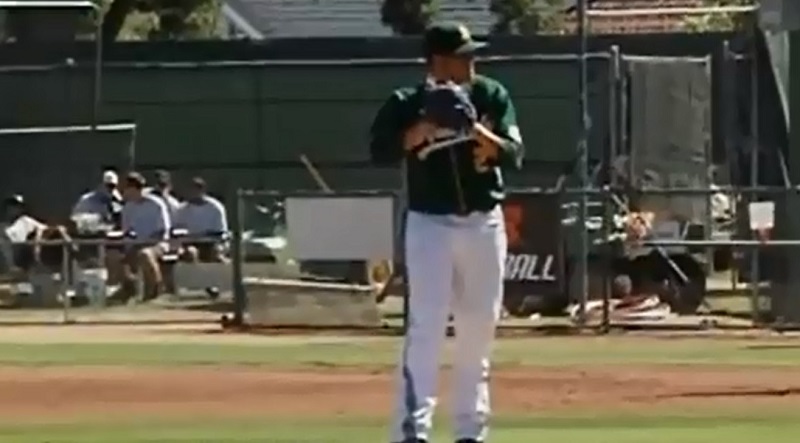 This is the eighth in my series of 2014 MLB Draft profiles. This time, I look at Luis Ortiz of Sanger High School in Central California.

Luis Ortiz plays in a surprisingly tough conference in Central California, which is becoming quite the baseball hotbed. He has good stuff to backup his strong draft rankings.

His fastball sits at 92-95 MPH, and tops out at 97. He’s a big kid and is able to get some good downward plane on his heater. It’s similar to Chris Anderson‘s fastball from last year’s draft. It isn’t so much a sinker as it is a heavy pitch, when he throws it correctly. It’s explosive and has late life to it.

Ortiz couples his potentially plus-fastball with a potentially plus-slider in the 81-84 MPH range. It’s a pitch he isn’t afraid to throw in any count. He can throw it for strikes and projects to be a good swing-and-miss pitch. The slider is tight and has late break, making it a great secondary offering.

He also has a changeup that is an 82-84 MPH pitch. It features solid fade and should end up being his No. 3 pitch. It’s definitely a work in progress, but it has a chance to be at least average.

Ortiz also has a little feel for a curveball, but if his changeup is considered a work in progress, then his curveball needs a lot of a work. If he can develop either the change or curve, he’ll have three legitimate pitches and a great chance of staying in a rotation.

His delivery starts off normally enough, but after an extremely high leg kick, he leaves his hands up by his ear and doesn’t appear to be in-sync. But, he brings them down and uses quick arm action to have his arm catch up with the rest of his body. It isn’t quite a whipping motion, which is a good thing. He finishes more upright than I like to see, but it appears to work for him. He delivers his pitches from more of an over-the-top release point than anything — maybe a “high-high” three-quarters slot.

The biggest concern most folks have about Ortiz is his body type. He weighed as much as 245 pounds, and took matters into his own hands. From Baseball America (almost a year ago):

“My biggest improvement has been losing weight. I was 245 (pounds) and I dropped down to 205. I was sick and tired of hearing I was overweight. I wanted to prove people wrong.'”

That’s great to hear from a then-17-year-old. He appears mature beyond his years and is aware of what he needs to do to be successful at the next level. He’s pretty much filled out, so there isn’t a ton of projection left in his frame. That isn’t some common of Logan White draftees, but not every prep pitcher draft has to be projectable.

Ortiz is a big kid, even after the weight loss, so his body will take more maintenance than other players who have different body types. But he seems to know what needs to happen. Unrelated: he missed three weeks of action due to a sore forearm (which is sometimes code for sore elbow). Some scout are concerned about that, but there’s enough arm talent and dedication that Ortiz will be a high draft pick. He’s ranked No. 7 on my Big Board (and will likely still be in the Tuesday update), and he’d be a solid selection that comes with a little more risk than other players I’ve profiled (Fedde notwithstanding). Signability isn’t much of a concern for the future first-round draft pick. He’s committed to Fresno State University, but it won’t take much for him to forego that. He could be a No. 2 starter if everything comes together, but he’d more likely a No. 3 starter or a power reliever if he can’t develop a consistent third pitch and/or doesn’t maintain his body.

Dustin Nosler began writing about the Dodgers in July 2009 at his blog, Feelin' Kinda Blue. He co-hosted a weekly podcast with Jared Massey called Dugout Blues. He was a contributor/editor at The Hardball Times and True Blue LA. He graduated from California State University, Sacramento, with his bachelor’s degree in journalism and a minor in digital media. While at CSUS, he worked for the student-run newspaper The State Hornet for three years, culminating with a 1-year term as editor-in-chief. He resides in Stockton, Calif.
@DustinNosler
Previous Pirates 5, Dodgers 3: That Game Happened, I Guess
Next This Is Not A Drill: Scott Van Slyke, Center Fielder