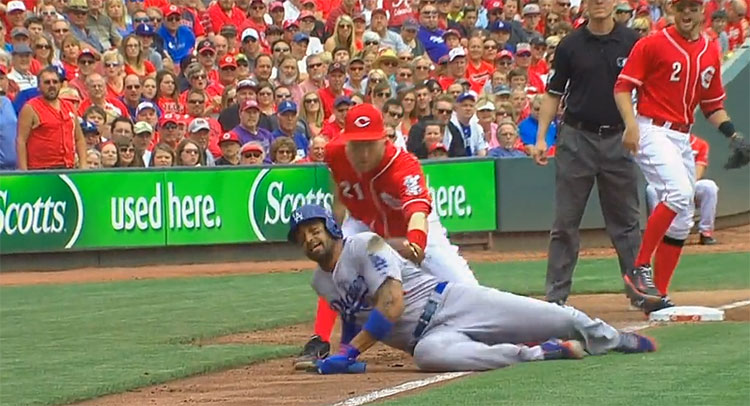 Zack Greinke‘s next 19 hitters: one hit, one walk. Taken as a whole, it was a perfectly fine day for Greinke, who overcame his tough start to mow through the Reds offense.

Unfortunately, baseball is a team game, and when the rest of your team is getting completely shut down by Alfredo Simon, giving up two runs in the first three hitters was essentially the end of the game. Yes, Justin Turner and Matt Kemp both had two hits (Kemp also walked), teaming up for the Dodgers’ only run in the first inning, but otherwise? Not… a whole… lot. From the second through the sixth, the Dodgers had one hit.

Which brings us to the seventh, and a faint glimmer of hope. Kemp led off with a single, and advanced to third when Andre Ethier also singled. Men on the corners! None out! It’s among the best situations you can be in; you almost have to try not to score from there. Ah, but you forget: the 2014 Dodgers. They make it look easy. And let’s be honest here, having Tim Federowicz, Miguel Rojas and the pitcher’s spot coming up isn’t exactly ideal. Your bench options are Drew Butera, Scott Van Slyke, Chone Figgins, Jamie Romak and a not-fully-healthy Hanley Ramirez.

So… what do you do? You can argue that Federowicz is a terrible hitter — he is — and that you hit for him there even though it leaves you without a backup catcher. I think we can all accept that just about no manager in baseball, not just Don Mattingly, is really doing that. Federowicz flied to right, not nearly far enough to advance Kemp. Now you have Rojas, who, despite a single earlier in the day, has a long minor league track record of being unable to hit.

Do you bring in Van Slyke here? This is where having Ramirez sitting on the bench but unavailable just kills you. At the time, based on pre-game reports, it sounded like Ramirez was available, but since he never got in either in this situation or in the ninth, it appears that information was faulty. Mattingly didn’t make a move, presumably not thinking the other options were worth putting Turner or Figgins at short; Rojas grounded to third, where Kemp was caught in a rundown, though Ethier showed great awareness in (barely) getting to third behind him.

Now you have two outs and runners on the corners, with Greinke coming up, having thrown only 72 pitches. Now, Van Slyke enters the game, where he quickly strikes out to end the threat. Van Slyke against righties is obviously not the same as Van Slyke against lefties, though I won’t entertain the idea that Greinke is the better option there. I will, however, give credence to the thought that you had a few options — say, Romak and Van Slyke, or Van Slyke and Greinke, or Romak and Greinke — and went with arguably the worst of the four in Rojas and Van Slyke.

That didn’t cost the Dodgers the game, of course; as always, the total inability of the players to perform is much more important, which we saw again in the ninth, when Kemp walked and Federowicz (!) singled him to third after Ethier hilariously struck out against Aroldis Chapman. Again, with Ramirez hurt, the options were poor. Rojas struck out. Romak struck out. There just weren’t any good options for Mattingly there. But hey, Brandon League had come on in the bottom of the eighth to to give up a double and a run-scoring wild pitch and another double and then a run-scoring hit! So, it would have taken more than just one run. Like, for example, several runs. Which a talented major league offense should score. But not this one! Not today. Or plenty of other days.

Mike writes about lots of baseball in lots of places, and right now that place is MLB.com.
@mike_petriello
Previous Dodgers @ Reds June 12, 2014: Battles Within The Game
Next Dodgers sign 10 picks from 2014 draft, including Verdugo, Richy, Walker, De Jong, Kowalczyk