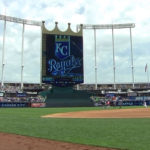 It’s cool if you don’t remember the last — by which, of course, I mean “the only” — time the Dodgers visited Kansas City. It was way back in 2005. The names included guys like Antonio Perez and Mike Edwards and Jason Grabowski. It was a time before Twitter, which is a good thing. No one wants to tweet about Jason Grabowski. No one wanted to watch Jason Grabowski. The Dodgers of that year would lose 91 games, their worst showing since 1992, and go on to draft Clayton Kershaw. The Royals of that year would lose 106 games with a 21-year-old Zack Greinke leading the staff, the most in team history, and go on to draft Luke Hochevar. What a year. I’m not sure why I’m still talking about it.

Nine years later, things are a bit different. Greinke’s a Dodger now, and he’s among the best pitchers in the game. His team is seven games over and steaming towards the first-place Giants. The Royals, fresh off their first full winning season since 1991, just lost four in a row after winning 10 in a row. They’re a weird team, and they have no power at all, but they can be dangerous. I imagine this series might be just a little more watchable than the 2005 version.

Being in an American League park, of course, means that we’re seeing the DH, and tonight that’s Hanley Ramirez. It means that Miguel Rojas and Carlos Triunfel are both in the lineup, which is a little scary, but hey: defense! It also makes a short bench even shorter, since only Justin Turner, Scott Van Slyke, Jamie Romak, and backup catcher Drew Butera are in reserve, but with no need for double-switches, perhaps it won’t matter so much.

Interestingly enough, just about no one on the Dodgers has seen Royals starter Jeremy Guthrie before. It’s his 11th season in the bigs — that’s misleading slightly, I suppose, because it includes three early-career seasons in which he got into 16 games total — and yet only three Dodgers have ever faced him. Ramirez is one, and Adrian Gonzalez is another; since Butera isn’t starting tonight, that’s basically it. And we know how the Dodgers do against pitchers they’ve never seen, right?

Mike writes about lots of baseball in lots of places, and right now that place is MLB.com.
@mike_petriello
Previous There is no benefit to the Dodgers trading Matt Kemp
Next Royals 5, Dodgers 3: Not As Close As The Score Would Indicate