Royals 5, Dodgers 3: Not As Close As The Score Would Indicate 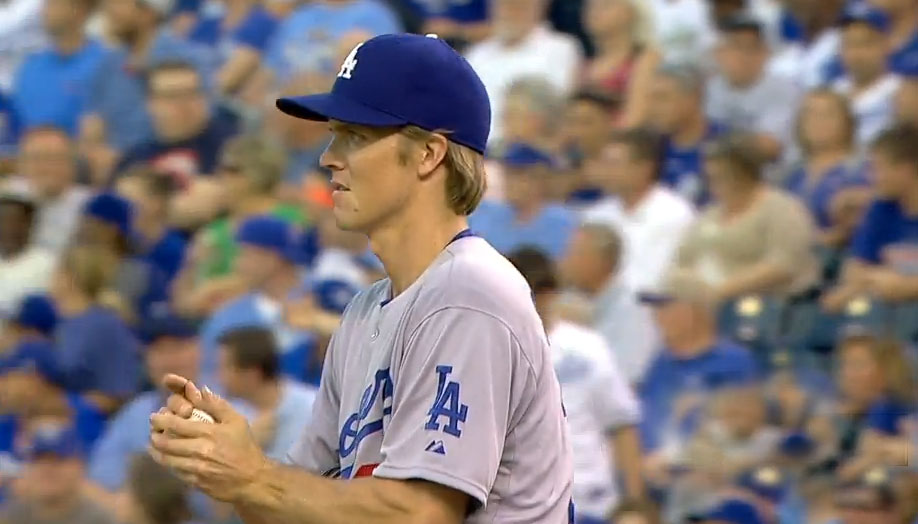 You know it’s a bad game when… well, this was a bad game for a lot of reasons. But specifically, you know it’s a bad game when it’s the bottom of the sixth inning, and I was already looking up what the record is for a fewest pitches by an opposing pitcher in a complete game victory against the Dodgers since they moved to Los Angeles. (It was Lew Burdette at 83 in 1959, for the record.) Even if the opposing pitcher had been Chris Sale or Stephen Strasburg or Felix Hernandez, it still would have been depressing. That it was the thoroughly mediocre Jeremy Guthrie, who needed just 67 pitches to get through six innings at that point, well, it was crushing.

Guthrie didn’t come close, coming out after Hanley Ramirez‘ eighth-inning double with 7.1 innings and 95 pitches under belt, but it didn’t really matter. That we’re even talking about the possibility pretty much sums up the evening for you there. Only four Dodgers managed hits in the first seven innings, all singles, and even Dee Gordon‘s was less about Guthrie giving one up than it was about Gordon laying down an absolutely perfect bunt single. Finally, there were some signs of life in the eighth, where after A.J. Ellis struck out to lead off, Miguel Rojas and pinch-hitter Justin Turner each got on base via singles, coming around to score on Ramirez’ long double to the wall. But Yasiel Puig, swinging at Wade Davis‘ first pitch, grounded out to end the threat. Adrian Gonzalez added a homer off of Greg Holland, of all people, in the ninth, his first in over a month, but that really just made the score look closer than it was.

Puig went 0-4, by the way. Since he hurt his hip on June 7, he’s hitting .222/.295/.259 in 61 plate appearances. But sure, let him play through injury. To be fair, he did hit at least two balls hard tonight, so it’s not completely like he looks feeble out there or anything; still, who’s thinking this is a coincidence? I’m terrified about where this might lead.

Of course, I’ve done my best to get this far without talking about Zac… oh, wait, did I mention how good the Royals defense is, with Eric Hosmer making three fine defensive plays, including picking a tough Mike Moustakas throw in the ninth to prevent the tying run from reaching, and outfielders Jarrod Dyson and Lorenzo Cain each making contributions of their own? No? Because I should. They’re really, really good.

But yes, obviously, Zack Greinke was not his usual self tonight. Not once did he have a perfect inning. He didn’t walk anyone, but he did allow 11 hits, including Salvador Perez‘ ninth homer of the year. Clayton Kershaw gave up seven earned runs in 1.2 innings just over a month ago, remember. It happens. Greinke has been great. I’m not going to lose a wink of sleep over it.