Mailbag! Send us questions through the form at the right or thedodgersdigest at gmail dot com. Sorry if we can’t get to them all; they’re all appreciated. And for the multitudes of you who asked about Zach Lee, do refer to Chad’s recent post about internal pitching options.

David: “why do you think Arruebarrena’s suspension is light? he hit an HR the night before. this is Minors. an Arizona farmy getting upset that he takes his time around the bases (yes, he should speed up but still…) then the next day they throw at/near his head? after striking out he tells the catcher what eh thought of the bush league move. then the AZ team attacks him. how did HE escalate the incident? the Ump could have tossed him immediately if he thought necessary. throwing his helmet? he was under attack. i think 5 games is too much.”

Have to completely disagree on that one. This is in reference to Erisbel Arruebarrena‘s July 26 brawl in Triple-A, which Chad so expertly broke down here, and let’s not pretend he’s blameless there. Embedded in Chad’s post is a video of the home run that Arruebarrena hit the night before, and that is a seriously 80-grade home run trot. It took him around a week to round the bases, and it was his second career homer. I’m certainly not suggesting that the Aces — a Diamondbacks club, go figure — had the right to start throwing at him, but it’s not hard to understand their anger. Then, when the fight broke out, it was Arruebarrena who got in catcher Blake Lalli‘s face, and Arruebarrena who nearly took off Mike Jacobs‘ head with his helmet. (In self-defense, sure.) If anything, I was surprised he didn’t get more.

Pete: “Desperate times call for desperate measures, I know but….what about Tim Wakefield? Surely he has enough left in the tank to get through two months and it’s not like he’d need a lot of time to get into shape. Plus he’s been in pennant races and could provide that level of maturity. Thoughts?”

Tim Wakefield turned 48 years old the other day and has been out of baseball since 2011. Even a knuckleballer can’t just pop up and pitch — pitching is as much about keeping the legs in shape as the arm — and even if the Dodgers wanted to, and he wanted to, there’s always the issue of asking your catcher to actually catch the thing. I run this here not because it’s realistic in any way (sorry, Pete) but to show the level of desperation I think we’re all feeling about Josh Beckett and Dan Haren. It’s… not great.

Larry: “Given the recent greatness of Dee Gordon, you think there’s a chance the Dodgers let Hanley walk at the end of the season and place Dee at SS and put Guerrero at 2nd?”

None. Zero. I can’t see it, because between 2011-13, Gordon was not only a bad shortstop, he was basically the worst shortstop in baseball. Now, he’s spent considerable amounts of time improving himself at second base and not spending any time at shortstop at all. Like you, I’m impressed with his shocking offensive production, but that has nothing to do with how he fields the ball, so no, I can’t see him back there. That said, if Gordon is the second baseman going forward, it makes for an interesting question about what happens to Alex Guerrero. Remember, he wasn’t exactly getting glowing reports for his second base defense even before Miguel Olivo mutilated him; since rejoining Albuquerque, he’s been playing second, third and left. Maybe his future is as a multi-positional utility man. Maybe he’s trade bait.

Charles: “The Dodgers have not worn their script LA road jerseys in quite a while. Are they going to phase them out? I hope not, as they are one of the best looking road Jerseys in all of baseball.”

They’ve worn the “Dodgers” road jerseys 35 times, going 18-17. They’ve worn the “Los Angeles” jerseys 21 times, going 15-6. As Charles correctly notes, the LA jerseys haven’t been seen much lately, just three times since the start of June, and not at all since June 22. Eric Stephen noted last week that clubhouse manager Mitch Poole said the trend was due to “winning,” but as you can see in the stats above, that really doesn’t make sense. My guess is simply that the team wants the “new” one to be worn more in order to promote sales; as I said at the time it was unveiled, it’s so similar as to not even be noticeable. Before looking it up for this question, I’m not sure I could have told you that it’d been so long since the “LA” jerseys were worn. 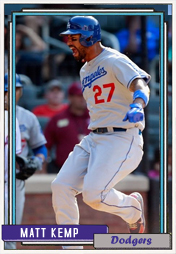 Eric: “Am I the only one who finds it “interesting” the Kemp’s recent surge in production coincides with the trade deadline? Decided to up his production in an effort to get out of town?”

Yes. Probably. I really don’t think that Kemp’s recent hot streak is as simple as “deciding to up his production,” which is not really a thing that you can just do no matter whether you want to stay or go.

What it might be — other than the .444 BABIP over the last 30 days, which, don’t count on that continuing — is passed along by ESPN’s Buster Olney:

The weekend after the All-Star break, the Dodgers were in St. Louis and Matt Kemp was struggling, so he went to the coaching staff and asked for help. What he’s done lately is adjust his stride at the plate to enable him to cover the outside corner better, and he’s gotten back to driving the ball to right-center field.

(Sure seems like a guy with an attitude problem to me.) That probably demands a more in-depth post at some point to investigate; for now, any time there’s a tangible change we can point to that backs up production, it makes me feel better about that production continuing.

LA_Woman: “So a friend & I had a disagreement the other day about whether Kershaw or Wainwright had a higher WAR. We eventually figured out that he was looking at Bref and I was looking at Fangraphs, which led me to wonder whose WAR you guys are referring to when you talk about it in your posts, and also about how it can even be a reliable stat if there are different ways to figure it.”

I won’t speak for the other guys, but I always use FanGraphs WAR. This is partially because I work there and am super biased about it, but it’s also because, for pitchers, it’s based on FIP rather than runs allowed, which Baseball-Reference uses. FIP isn’t perfect, but I prefer it because if I’m going to be looking at a value stat for pitchers, I want something that is based only on what the pitcher can control, rather than something that relies on others as well. There’s actually a great chart here that details the differences between them, and a post about it here. They’re both very good, I think, and you can’t go wrong with either; it’s not like one says Mike Trout is the best player in baseball, and the other says he’s fringe-average. It’s just minor differences based on taste.

KEOKI: “MATTINGLY..WHEN YOU THROW A GAME .ITS CALLED BAD MORAL CHEMISTRY.. BAD MOMENTUM..BAD CONFIDENCE FOR WHOLE TEAM … CHANGE THE MANAGEMENT START W/ COLLETI AND MATTINGLY…AND ALL THEIR COACHES… SCREW UP MORE THAN 3 TIMES ON SAME IS INSANITY !!!”

Mike writes about lots of baseball in lots of places, and right now that place is MLB.com.
@mike_petriello
Previous Angels 5, Dodgers 0: Well at least Carlos Frias looked good
Next Angels @ Dodgers Aug. 5, 2014: Clayton Kershaw against one of MLB’s best offenses