The return of Matt Kemp‘s power has been one of the most fun stories of the second half of the season. After hitting just six home runs in 2013 and eight before this year’s all-star break, Kemp has added 16 more. His 24 home runs in 2014 are the most he’s hit since his 2011 should-have-been-MVP campaign. His offense still wasn’t bad before the recent hot streak, and we’ve talked about some of the changes which has led to the success previously. Yesterday, Jeff Sullivan of Fangraphs wrote on how pitchers are responding, by throwing Kemp fewer fastballs near the zone. So far, that hasn’t mattered.

During a quiet series, I figured it would be good to dig into Kemp’s power data a bit, using Bill Petti’s fantastic interactive spray chart tool. Below is a graph of Kemp’s fly ball distances in the years 2011 through 2014 (as well as first and second half splits for this year). The distances are broken down into left of center and right of center so we can track how Kemp’s power has changed to the pull side and opposite field side. 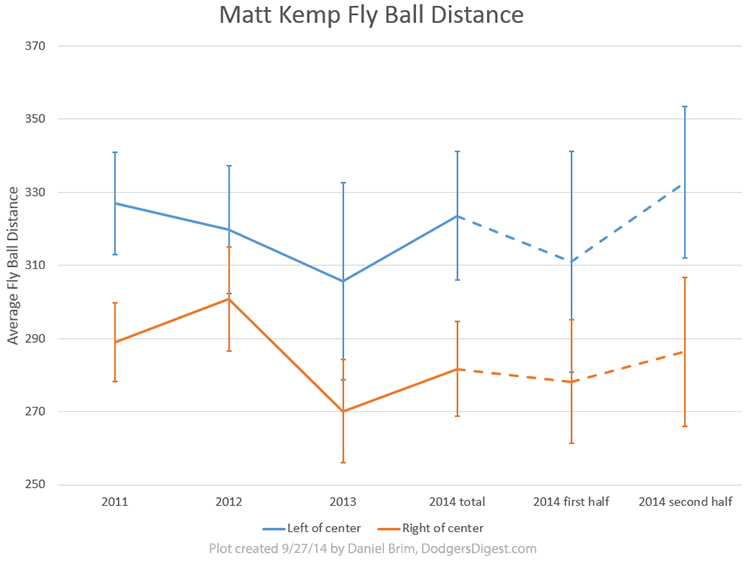 In 2011, Kemp averaged 326.9 feet to his pull side and 289 feet to the opposite field. He lost a bit of pull power but gained opposite field power in 2012, fueled mostly by his torrid start that season. 2013 was significantly down in both areas including a 30 foot loss in opposite field power. There’s that shoulder injury, probably. This season has seen a rebound. His full season pull power is just three feet shy of where it was in 2011, including a huge jump after the all-star break. His opposite field power has increased since the all-star break as well, with the full season average about seven feet short of where it was in 2011. In the tiny sample since the all-star break (seriously, look at those huge confidence intervals), Kemp has been hitting the ball at nearly the same level as when he hit 39 home runs in one season.

The confidence intervals are large, since the samples are relatively small. Still, it’s refreshing to see. Kemp has found some of his former power, which will make him extremely dangerous in the playoffs and beyond.

Daniel Brim grew up in the Los Angeles area but doesn't live there anymore. He still watches the Dodgers and writes about them sometimes.
@danielbrim
Previous Dodgers 7, Rockies 4: Six Run Sixth Propels Dodgers to Victory
Next Rockies @ Dodgers Sept. 27, 2014: Two More To Go