What a pleasant little tune-up for the playoffs that was, right? The Dodgers didn’t even appear to be trying that hard this weekend, and they still managed to sweep the Rockies to end the regular season at 94-68, their most wins since they had 95 in 2009, and the second-most since also winning 94 in 1988. 93 of those wins belong to Don Mattingly. One, today’s, belongs to fill-in manager Juan Uribe, which should probably explain for the ten millionth time that players win games, not managers. I’m mostly joking, but only mostly. It doesn’t take managerial genius to win a game against a terrible Colorado team that gave up months ago when you have Zack Greinke on the mound and Adrian Gonzalez & Matt Kemp hitting home runs.

I mean, if The Simpsons have taught me anything, it’s that managing basically comes down to this:

Seriously, though, how can you not love this: 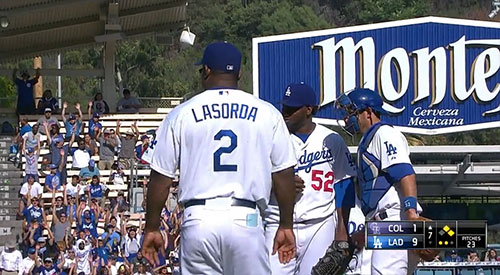 Not that there’s any point in spending time in seriously analyzing a meaningless game, but I’m showing you one GIF here, and it’s not Kemp’s homer or Gonzalez’ homer or Greinke’s double or any of the multiple hits Darwin Barney & Carl Crawford had. It’s Roger Bernadina, so unexpectedly added to the roster in September that he didn’t even merit a post of his own, crushing a Rob Scahill pitch into the bleachers in the sixth, turning a laughable game into… even more of a laughable game.

Bernadina would later drive in the 10th run of the game, as well. A fun day for a guy most fans have never heard of. Uribe didn’t really make as much of a mockery of the lineup as we perhaps thought he might, though when he brought Alex Guerrero in, he did so in left field. I can’t tell you the amount of Dodger fans who insist to me that Guerrero is a “natural” shortstop, as though that means anything — Kenley Jansen is a “natural” catcher, and look where that got him — and the fact that the Dodgers simply refuse to let him play the position should tell you something. (That they refuse to let him play second base should tell you something too, but that’s a story for another time.)

Thanks to the disappointing fact that none of the three possible Monday tiebreaker games are going to happen, there’s no baseball tomorrow. The A’s visit Kansas City for the AL wild card game on Tuesday; San Francisco heads to Pittsburgh for the NL wild card game on Wednesday, and the ALDS starts Thursday. The Dodgers have a few well-deserved days off (with some regular workouts) before welcoming the Cardinals to Los Angeles to kick off the NLDS with Clayton Kershaw against Adam Wainwright on Friday.

The roster doesn’t need to be submitted until the morning of Game 1, so we’ll have a few days to learn more about the health of Hyun-jin Ryu and dispute Barney vs Miguel Rojas vs Erisbel Arruebarrena vs Paco Rodriguez vs Carlos Frias vs Roberto Hernandez for the last two spots.