What happened in 2014: A strong start fueled a surprising breakout season before a late season fade.

Before the season began, most people had completely written off Dee Gordon. He struggled in 2013 between two levels, which was on the heels of a disastrous 2012 season. He no longer had a home at shortstop, and the Dodgers signed Alex Guerrero to a four-year, $28 million contract, presumably to fill a spot at second base. Gordon played some second base in winter ball, along with center field, but it was difficult to see how he would fit into a Dodger roster that was crowded up the middle.

During spring training, Gordon’s place began to become clear. Guerrero got the first few starts at second base, but didn’t look quite ready to contribute on defense, and Gordon began to get more starts at the position. On March 9th, Mike wrote the following about Gordon starting the season as the starting second baseman:

At this point, it’s easy to see him as the leader for the second base job over Alexander Guerrero, and I can live with that if it happens. While it will be portrayed as a huge disaster — one of the game’s worst players over the last three years beats out $28 million Cuban import! — I’ve said a few times that I have no problem if Guerrero spends a few weeks in the minors, since acclimating to a new country, culture, and position isn’t easy.

“A few weeks!” Funny how things turn out. And, while Guerrero technically made the opening day roster, along with Gordon, it was Justin Turner who made the first start at second base in Australia. The Dodgers started the season with a platoon at second, something I called for the prior day.

Even before injuries to Hanley Ramirez and Juan Uribe removed Gordon’s platoon protection, he was making his presence felt, like he did here against Max Scherzer in early April:

In March and April, Gordon hit .344/.375/.478. His best game of the season, and his career, came on April 13th against the Diamondbacks. He only had one hit, but he walked twice (more on walks in a bit) and stole four bases. One of them didn’t even require a pitch:

Also, note the over-wet dirt in front of the plate. It didn’t work.

Those four steals were a part of Gordon’s 64 this year, enough to lead the majors. Looking back on Dodger history, Juan Pierre also stole 64 in 2007, and those two were tied for the most since Davey Lopes swiped 77 bags in 1975. Gordon’s stolen base success could have been a bit better, 19 times caught led to a 77.1% rate. A major leaguer needs to maintain a 2/3 success rate just to break even in the run value added by stealing bases, which explains why FanGraphs only gave Gordon’s steals credit for five extra runs. However, Gordon was excellent on the bases in other areas, such as going from first to third on singles. When combined with his stolen bases, that brought his baserunning value to +9.4 runs above average, second-highest in all of baseball. Only Ben Revere of the Phillies did better.

By mid-April, Gordon was hitting well enough that we were okay with him sticking around, even as Guerrero began to produce in Albuquerque. This continued into mid-May, which caused Mike to wonder what the options were and how long the Dodgers could keep Guerrero in the minors. Mike already underlined how funny the conclusion was in hindsight in his Guerrero review.

A lot of Gordon’s early success in 2014 had to do with him keeping the ball on the ground: 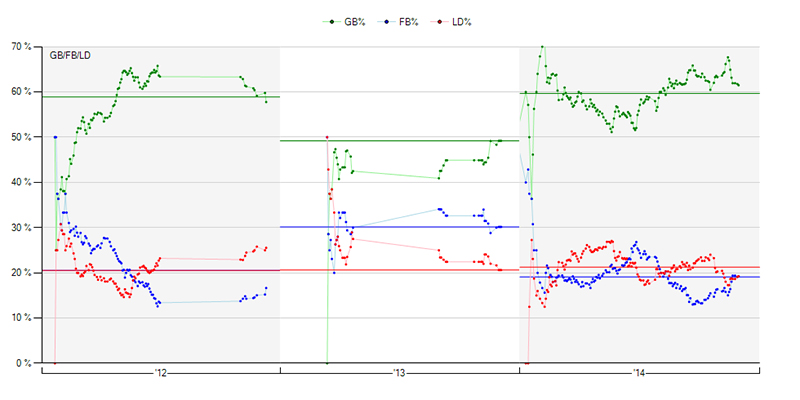 Gordon’s early hot streak does seem to coincide with the high moving average on the green line, doesn’t it? His GB/FB rate ended up at 3.13 at the end of the season, higher than his previous highs of 2.63 and 2.87 in 2011 and 2012, respectively. Gordon also showed a better ability to bunt for hits, doing so 20 times in 2014, the highest total in the majors. He reached base safely in 42.6% of his bunt attempts, by far a career high.

One of the drivers of Gordon’s success wasn’t found until August. Sometimes these things are hard to spot! Chad did a terrific post on Gordon’s stance changes, noting that he was more crouched to begin the season. At the time of the post, Gordon was starting to revert back into old habits, but for the first few months of the season, it worked well.

It even led him to the All-Star game! Gordon left his mark on offense, scoring from first on a Jonathan Lucroy double after entering the game as a pinch runner:

Then, later, showing off the strides he made with the glove in 2014 to rob third-place AL MVP finisher Michael Brantley of a hit:

Gordon ended the season ranked a bit below average by both UZR and DRS, which seems low compared to the eye test. I could believe average or slightly above given his range, though Gordon did boot the occasional easy play as well. Even if the numbers are true, it’s still a gigantic leap from the absolute disaster he was at short, and that should absolutely be appreciated.

Now, onto the elephant in the room: Gordon’s late-season decline. One of the easiest ways to summarize it was the lack of walks. After the all-star break, Gordon walked four times, and just twice after July 22nd. The walk rate was actually a concern I noted as far back as early May. A player like Gordon really needs to walk to be a productive major league player, especially as his early BABIP luck wore out as the season progressed.

Reviewing that plate discipline article also reveals some trends on how pitchers changed their approach to Gordon as the season wore on. The article noted that pitchers were throwing Gordon fewer pitches off the outside part of the plate, a trend which did not continue. His whiff rate on outside pitches and as a whole regressed back to normal after that article ran as well. Writing about baseball in May is hard!

The early May article also concluded that Gordon’s walk rate was likely to rebound. Obviously, it did not. One of the reasons behind that conclusion was that pitchers were throwing more pitches to Gordon in the zone than they had in the past. That zone rate went from 56% when the post was written down to 51% by season’s end. Gordon did not respond by walking more, but rather by whiffing at more pitches outside of the zone. At least, through the pitching approach change, Gordon’s strikeout rate did not meaningfully increase. It ended the season down from 2012 and 2013. Outs turning into balls in play will help anybody, but will especially help Gordon.

By the end of the season, Gordon looked to be tiring out. He got some extra time off in September, as the Dodgers temporarily restarted the platoon (this time, with Darwin Barney) to get him some extra rest. He started every game of the playoffs, but only hit .176/.263/.176. Funny how you only heard about Puig’s struggles, right? At least Gordon managed to walk twice in that span, but he looked pretty over-matched by the Cardinal pitching.

But, even with the fade to the finish, it’s hard to view Gordon’s 2014 season as anything other than a success. The expectations were just so, so, low, and his presence was sorely needed as Guerrero struggled adapting to his new position (and as he had to deal with his ear being bitten off). We can use arbitrary endpoints to judge his season all we want, but when you view the season as a whole, it’s hard to ask for anything more.

The future for Gordon is still cloudy. His distant past still means something, even when weighted with his recent past. Steamer projects Gordon to regress back down to an 83 wRC+ next year, with a slash line of just .256/.306/.330. You can nitpick their BABIP projection (.305 seems really low for Gordon’s skill set), but the fact remains that there is some potential for regression towards his 2012 and 2013 forms. This is why it might be wise for the Dodgers to sell high on Gordon. At the very least, I’ll be pulling for the Dodgers to platoon Gordon again in 2015, because his 141 plate appearances of competency against lefties this year is not much compared the 1000PA rate of stabilization for L v L platoon splits. If he does stick around, that could be with Guerrero, or even with Barney to minimize his offensive woes.

Either way, what the new front office does with Dee Gordon is sure to be fascinating.

2015 status: First-time arbitration eligible as a “Super 2,” will earn about $2.5MM. More likely to be around than not.

Daniel Brim grew up in the Los Angeles area but doesn't live there anymore. He still watches the Dodgers and writes about them sometimes.
@danielbrim
Previous Dodgers Acquire Kyle Jensen, Because Oklahoma City Needs Players Too
Next Jimmy Rollins should be on Dodgers’ radar for shortstop