Remember that time when Chone Figgins was a Dodger? That is something that we will say in a few years. Figgins was a little bit better than most Ned Colletti veteran signings, but that didn’t stop the Dodgers from moving on at the right time.

Let’s put it this way: Mike’s headline on the post on Figgins’ signing (the tenth in Dodgers Digest history!) was “Dodgers Sign Chone Figgins and I Make Archer Jokes.” And who could blame him, really, when Figgins made his case (via Ken Rosenthal) for catching on with a team after a full season off like this:

He reminded the scouts that even in limited playing time last spring, he was 8-for-26 with three walks for the Marlins, demonstrating that his skills were still intact.

Fantastic. Figgins was a non-roster invitee, so he had to prove himself in spring training. Once it was clear that Alex Guerrero and Erisbel Arruebarrena needed some more time in the minors, Figgins had his opening and made the team out of spring training.

Still, Figgins wasn’t quite the disaster re-tread veteran that most of us were expecting. We’ll ignore the defensive component of WAR because it doesn’t matter in that sample size (he was fine, probably, but not a shortstop), but… a league average batting line? From Chone Figgins? The Dodgers will certainly take that. As you can tell from the line, Figgins didn’t have much power, or many hits, but he managed to draw 14 walks in 76 plate appearances, an 18.4% rate.

The way Figgins did this was probably unsustainable. Basically, he never swung. In 2014, 509 non-pitchers logged at least 50 plate appearances. Figgins’ 31.5% swing rate was dead last among that group. Figgins did see an above average number of strikes in the Pitch FX strike zone, but it was still the lowest rate he saw since Pitch FX started tracking zone rates in 2007. The difference between Figgins and Matt Carpenter, who had the second-lowest swing rate last year, is that Carpenter can punish pitchers for their mistakes. Figgins can’t do that anymore. Pitchers would have adjusted, and that would have caused Figgins’ batting value to decrease rapidly.

Still, Figgins did provide some off-field value. He was one of the people spearheading a campaign to get Dee Gordon to the all-star game: 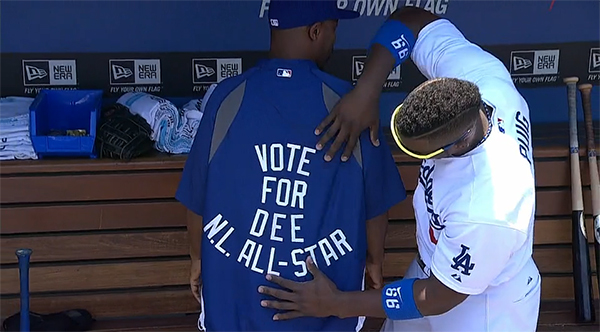 “I don’t know how Figgy did it,” Gordon said. “He’d say stuff like … ‘I didn’t ever hit. I walked and got my hits. You hit and get your walks.’ He’s been just showing me how to do that side of it as well.”

Figgins went to the disabled list on June 14th with a hip flexor strain. He started his rehab a month later with Albuquerque, but the Dodgers eventually designated him for assignment on August 6th. They just couldn’t find a role for him to fill:

The reason why Figgins was let go, other than the fact that the walk rate was not likely to continue, was that he isn’t really a shortstop. He played six innings there this year and it was his first time at the position since 2006. Figgins would have replaced Miguel Rojas, leaving him and Justin Turner to back up the injury-prone Hanley Ramirez. Turner can fill in at short in a pinch, but it definitely isn’t his strongest position.

During that post I speculated that Figgins could be back during September, but that never came to fruition. Still, it’s good to remember that Figgins actually was pretty useful during his time with the Dodgers. It certainly could have been worse.

Daniel Brim grew up in the Los Angeles area but doesn't live there anymore. He still watches the Dodgers and writes about them sometimes.
@danielbrim
Previous Mailbag #15: Guerrero, Seager, Urias, Detwiler, Castro and RBI
Next Why the Dodgers should be after Chase Headley