The Dodgers ran out a bottom of the order that consisted of Chris Heisey, Juan Uribe, A.J. Ellis, and Clayton Kershaw today against Giants ace Madison Bumgarner, who carved up the Dodgers lineup through six innings. Unfortunately for him, Alex Guerrero wasn’t a part of that initial lineup, which is why he did this:

For his part, Kershaw didn’t look sharp until about the fourth inning, when he proceeded to strikeout seven of the nine batters he faced. He finished with two runs allowed in six innings on only three hits and a walk while striking out nine.

The problem was that one of those innings was a typical Giants-y inning: 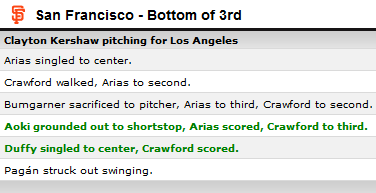 He also got help from Yasiel Puig:

As I posted earlier though, this series has sort of been summed up by Justin Turner somehow missing a tag on a pickoff of Norichika Aoki…

…and true to form, the Dodgers lost on a walk-off sac fly.

Oh yeah, and there was Giants third-base coach Roberto Kelly interfering with a runner right before their walk-off, which was a big deal.

But if we’re being honest, the actual problem was scoring only two runs.