The Dodgers are handing the ball to a 20-year-old in Game 4 of the National League Championship Series. Normally, that’d be frightening, but Julio Urias isn’t your normal 20-year-old.

Ever since signing out of Mexico for a million bucks, he has been one of the most intriguing prospects in the system. He catapulted up the rankings after his first full season and hasn’t looked back. Urias is praised for his poise and maturity, and it has been front and center in his Major League service to date.

Joe Buck mentioned Julio Urias lost to the Cubs earlier this season. He failed to mention he beat them the 2nd time. https://t.co/SsEuNCV0X7

Oh but wait, that’s right, Urias faced the Cubs a second time this season and fared much better in Dodger Stadium: 6 IP, 6 H, 1 R/ER, 2 BB, 8 K, 0 HR. It was his second-best start of the season and he produced 15 swinging strikes (a career-best for him).

Let’s look at those two starts in some detail.

In his first start against the Cubs, he worked off his fastball early, but there was a steep decline in its usage throughout the game. 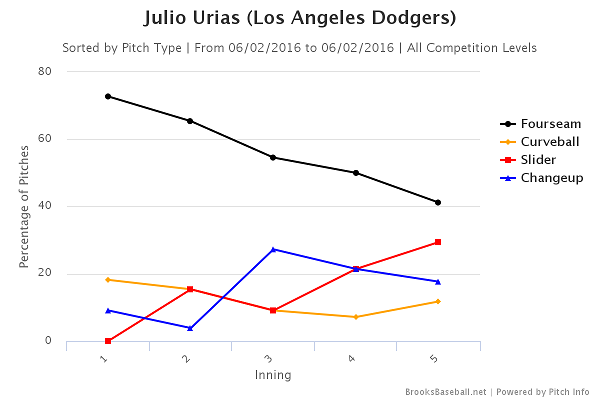 In his second start against them, he trusted his fastball a bit more. 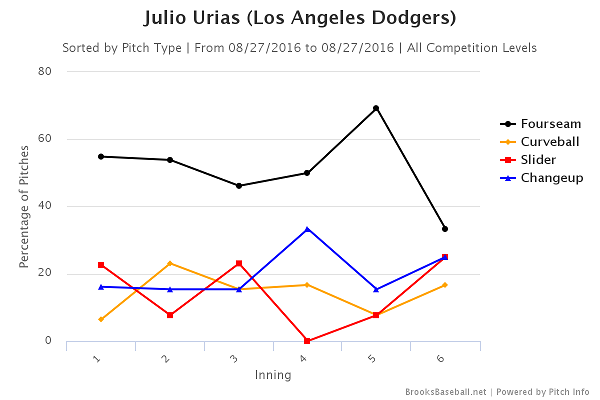 This, despite not throwing it as hard as he did earlier in the season: 93.3 MPH in June, 91.8 MPH in August. Urias’ off-speed pitches generated six swinging strikes at Wrigley Field and seven at Dodger Stadium, but his fastball really was a weapon in his late-August start.

Aside from the velocity difference — and it was 1.5 MPH — the other numbers are generally pretty close. Not enough to pinpoint an exact reason. But when you look at the location of his fastball in both games, it begins to make sense. 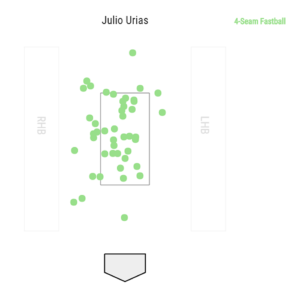 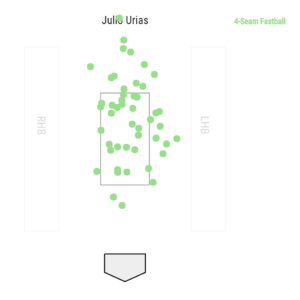 In June, Urias’ fastball was much more in the middle of the strike zone than it wasn’t, and he threw just five pitches above the strike zone. In August, he elevated his fastball to the tune of 12 pitches up and out of the zone. Even though he only got two swinging strikes in those 12, it was something Cubs hitters had to consider when hitting against Urias. The eye level changes and, in theory, makes hitters a little more susceptible to off-speed pitchers down in the zone. It’s something the Dodgers have been doing a lot this season (pitching above the strike zone … another article for another time), so it isn’t much of a surprise that we see this evolution here.

Not only has Urias’ fastball been a weapon, his off-speed pitches have taken a big step forward. Reality TV star Mike Petriello wrote about his secondaries at MLB.com this morning.

“Nowhere is that more evident than in the change we’ve seen in his curveball as the season has gone on. Urias used to have a sweeping, horizontal curveball, the kind that’s often tantalizing for right-handed hitters when it comes in from a lefty pitcher. It was, in fact, one of the oddest lefty curves in the game, in that after his first four appearances, it had an average of 8.2 inches of horizontal movement and very little vertical break at all.

The average Major League curve has 3.5 inches of horizontal movement and drops 5.2 inches, which is more like you’d expect a curve to be. It’s not quite like that any longer. The movement on his curveball changed throughout the summer, and Urias confirmed through his interpreter that he had changed his grip on the pitch, crediting Dodgers pitching coach Rick Honeycutt for helping him find something that works.”

Coming up through the system, his curveball was always his best off-speed offering. But to have him change the grip and actually have it improve — at the MLB level — is nothing short of amazing. His changeup is also quite good and will continue to develop.

This is why you don’t trade a kid like this without the return being premium. The Dodgers did great to hold onto him over the last couple years, and now, they’re tasking him with a huge game — the biggest of his career — and he’s well-equipped to handle the situation.

So, look for some high fastballs, a biting curveball and a few surprise changeups tonight. He might even break off a slider or two. Either way, I feel about as confident in a 20-year-old in this position as I could … you know, short of this being 1981 Fernando Valenzuela.

Dustin Nosler began writing about the Dodgers in July 2009 at his blog, Feelin' Kinda Blue. He co-hosted a weekly podcast with Jared Massey called Dugout Blues. He was a contributor/editor at The Hardball Times and True Blue LA. He graduated from California State University, Sacramento, with his bachelor’s degree in journalism and a minor in digital media. While at CSUS, he worked for the student-run newspaper The State Hornet for three years, culminating with a 1-year term as editor-in-chief. He resides in Stockton, Calif.
@DustinNosler
Previous Dodgers 6, Cubs 0: Hill’s gem gives Dodgers crucial NLCS lead
Next Cubs @ Dodgers October 19, 2016: NLCS Game 4