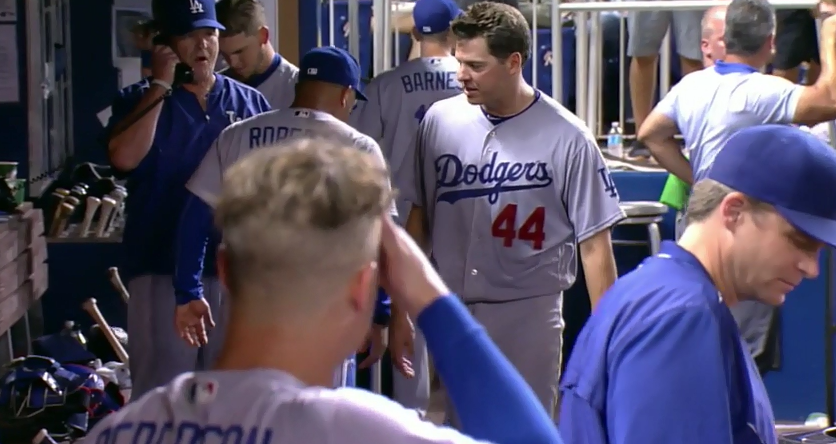 What happened in 2016: Began the season with Oakland, pitched well, missed time with a blister, was traded to the Dodgers, rinse, repeat.

Rich Hill is one of the more remarkable reclamation projects in recent MLB history. He was once a heralded Cubs’ prospect who had trouble throwing strikes. He bounced around, spent time in the Independent League before the Red Sox got 29 elite-level innings out of him in 2015. That helped land him a $6 million deal with Oakland in the offseason.

Word is the Dodgers wanted to sign Hill over the winter, but with Brett Anderson accepting the qualifying offer, the Dodgers couldn’t logistically make Hill work at the time. Instead, they acquired him and Josh Reddick at the Aug. 1 trade deadline for Jharel Cotton, Grant Holmes and Frankie Montas. Prior to trading for him, Hill had been dealing with a blister issue on his left hand, and that helped to keep him out of action for 23 days after the Dodgers acquired him. Chad wrote about the deal when it happened.

“Yes, he has only thrown 76 innings this year. Yes, he is currently on the disabled list with a blister. Yes, Hill has been elite when healthy. You want to talk about risk? This is one, but the upside is blatantly obvious. Of course, if Hill didn’t have risk, the Dodgers wouldn’t be able to acquire him for a package this light, and this was the best way the Dodgers could get a second ace for a reasonable price.”

All fair and accurate points.

Daniel, the day after, looked at the upside Hill had to offer.

“Hill has frequently been a two-pitch guy, back to his years as a bad reliever and a mediocre starter. There were years when he’d mix in a two-seam fastball, but he hasn’t relied heavily upon a slider or changeup in the entire PITCHf/x era. He would frequently tinker with release point and usage, but had trouble finding the strike zone which reduced the impact of his good strikeout rates.

The curious thing is that Hill’s repertoire change has really made his fastball play up. Among the 151 starting pitchers who have thrown at least 200 fourseam fastballs this season, here are the top whiff/swing rates:
-Rich Hill, 36.0%
–David Price, 28.9%”

While Hill wasn’t the Price-like starter fans were clamoring for at the 2015 trade deadline, he’s an elite pitcher. The only problem is getting enough innings out of him to make that elite-level of production mean even more.

Most fans were upset at the Dodgers paying as much as they did to get him (which wasn’t really that much). Those same fans were irate when, in his third start with the Dodgers, he took a perfect game into the eighth inning. Except, Dave Roberts lifted him from the game to save him from any further damage to his finger. He was mad, but he also understood the decision.

Make no mistake: The Dodgers made the trade for Hill (and Reddick) for the postseason. In October, Hill made his presence known.

His Game 2 start in the NLDS against the Nationals started off well enough, as he struck out the side on 15 pitches to begin the game. Through three innings, he was scoreless and had struck out seven Nationals. Things unraveled in the fourth inning when he allowed a 3-run home run to Jose Lobaton. The Dodgers went onto lose the game, but Hill had another chance at the Nats in Game 5. Despite throwing just 2 2/3 innings, he struck out six batters and allowed just one run. He gave the Dodgers eight outs and Roberts had a quick hook — understandably so in an elimination game. But Hill’s banner performance came in Game 3 of the NLCS against the Cubs. Hill shut out the Cubs for six innings in Dodger Stadium, allowing just two hits, walking two and striking out six. That was precisely why the Dodgers acquired a pitcher of Hill’s caliber. While they went onto lose the series, his Game 3 performance was the best of any Dodger starter outside of Clayton Kershaw‘s Game 2 performance in the same series.

2017 status: Inked a 3-year, $48 million deal to return to the Dodgers. He profiles as the team’s No. 2 starter behind Kershaw. If they can get 20 starts (plus postseason starts) out of Hill in each of the three years of his deal, it will have been well worth it.

Dustin Nosler began writing about the Dodgers in July 2009 at his blog, Feelin' Kinda Blue. He co-hosted a weekly podcast with Jared Massey called Dugout Blues. He was a contributor/editor at The Hardball Times and True Blue LA. He graduated from California State University, Sacramento, with his bachelor’s degree in journalism and a minor in digital media. While at CSUS, he worked for the student-run newspaper The State Hornet for three years, culminating with a 1-year term as editor-in-chief. He resides in Stockton, Calif.
@DustinNosler
Previous 2016 Dodgers in Review: LHP Alex Wood
Next Neftali Feliz unlikely to be the answer in the 8th inning for the Dodgers