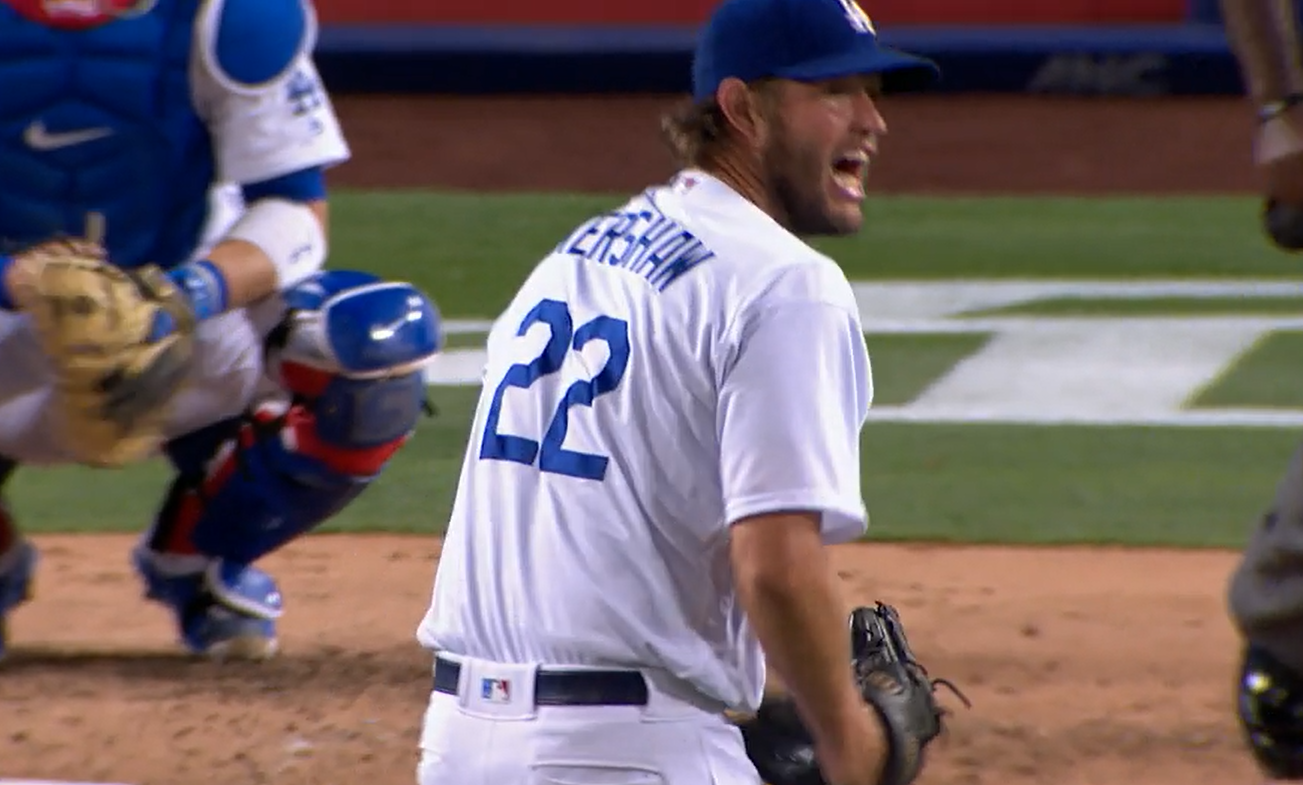 Clayton Kershaw starts generally tend to revolve around Clayton Kershaw, and tonight was no exception. With the Dodgers looking to extend their winning streak to five games against the rival Giants, the ace didn’t have his command or stuff upon laboring through 104 pitches in six innings.

Things started off about as bad as could be planned, with Kershaw being burned early after a Christian Arroyo single on a 0-2 pitch and then Hunter Pence depositing a hanging curve over the fence for two. Buster Posey added to Kershaw’s woes in the third with a solo shot of his own, this time coming on a chest-high hanging slider. In the fifth, Kershaw hurt himself by throwing away a mediocre bunt attempt after double clutching, as that run was later cashed in by Arroyo for the fourth run.

Can already tell I'm going to hate Christian Arroyo for the next 10 years.

Kershaw walked none on the night, but struck out just five and gave up eight hits to the Giants. While I’m not worried about Kershaw in general, I am worried about how frequently we’ve talked about his slider being a problem this year.

Offensively, the Dodgers actually got to Johnny Cueto early. Andrew Toles led things off with a single on the first pitch of the game, and after a walk to Corey Seager, the Dodgers had a bit of a rally going. Justin Turner then almost hit a ball out but it fell short on the warning track. Thankfully, the Dodgers did manage to get something out of the situation after Yasmani Grandal hit a ball hard down the line to score Toles after an errant throw prevented a double play chance.

In the second inning, the Dodgers struck again. After a Cody Bellinger lead-off double, the Dodgers failed to get anything going after a fly out and strike out, but Kershaw himself got the job done with a single to left.

Nice to have athleticism in order to score that run.

Unfortunately, the Dodgers were then completely quiet against Cueto until the seventh, when they got a little something going. Adrian Gonzalez reached on a single and then Bellinger laid down a perfect bunt against the shift to put runners on first and second and nobody out. However, a grounder and a strike out later and the Dodgers were on the verge of getting nothing out of it. Thank goodness for Chris Taylor, greatest hitter of all time, coming through against with a line single to left to drive in a run.

Sergio Romo took over for Kershaw in the seventh and against all odds managed to have a 1-2-3 inning that included a strikeout. Josh Fields entered for the eighth against the heart of the order, but faced the minimum despite walking the lead-off man thanks to inducing a double play. Fields then took care of the Giants offense for the day in the ninth as well with a 1-2-3 frame.

Still even with Mark Melancon unavailable, the Dodgers weren’t able to push the tying run across the plate in a rather anticlimactic ninth. On the day, they had just six hits and one walk, including just a double. So while Kershaw wasn’t Kershaw, the offense didn’t exact acquit themselves tonight either.

With the loss, the Dodgers fall back to 14-13 overall and 9-5 at Dodger Stadium, bringing their four-game winning streak to a halt.

The Dodgers look to get even in the series with the Giants tomorrow night at 4:10 PM HST/7:10 PM PST/10:10 PM EST. The mound matchup will be between two lefties in Alex Wood (2.29 ERA/3.09 FIP/3.04 DRA) and Matt Moore (4.80 ERA/5.08 FIP/8.90 DRA). Moore is struggling to start the season but looked fine against the Dodgers last time out, and Wood is still likely on a short leash for his rotation spot simply because the Dodgers know he’s effective out of the pen.