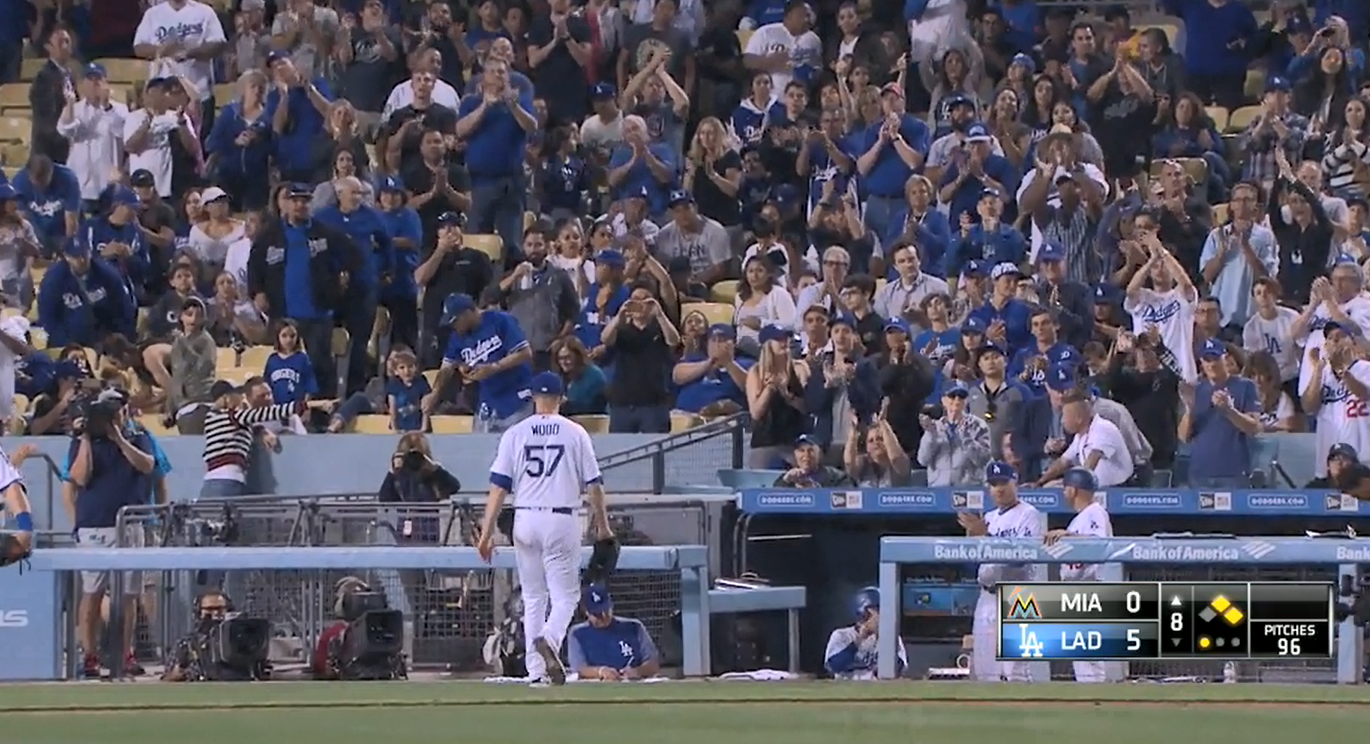 I’ve always had faith that Alex Wood could be a quality starter, and I thought based on merit he deserved that shot to start in 2017, but THIS I didn’t expect. Wood’s shutout innings tonight led the Dodgers to a 7-2 victory over the Marlins, and a three-game winning streak.

Wood didn’t even appear to be at his best today, frequently getting out of trouble with double plays, but the fact that he can get results like this regardless of sharpness is definitely a welcome change. Also, the fact remains that he got a lot of those double plays because Wood induced a ton of weak contact on the ground to begin with (1 fly ball out), and that’s another check in the positive column.

On the night, Wood went 7.1 shutout innings on 96 pitches, surrendering just 6 hits and 2 walks, and striking out 4 batters. Better yet, if he wasn’t getting squeezed in the early innings, he would’ve had two more strikeouts and one less walk as well.

It feels like Alex Wood can't be this good, but none of the peripherals really say he's not this good.

Ross Stripling entered in relief in the eighth with one down and runners on 1st and 2nd. All he did was face the Marlins best hitter on the season in Marcell Ozuna and get him to ground into a 4-6-3 double play to end the threat.

The offense managed to do their job again today, and unsurprisingly the Dodgers look a lot better as a team when that happens since the pitching has been consistently quality.

Things got started quick in the first, with Chris Taylor smacking a lead-off double, followed by a Corey Seager infield single to short. With one out, Enrique Hernandez walked to load the bases, and Austin Barnes plated a run with a nubber off the end of his bat to first. The Dodgers got no more that inning, but it was only a temporary failing.

Taylor continued his NL MVP campaign by hitting a homer to right to start the third.

Seager followed with a double into the gap in right center, and with one out Enrique singled up the middle to plate Corey for another run.

The Dodgers struck again in the fourth, as after a Yasiel Puig walk, Brett Eibner hit a one-out dong to center.

Finally, after an Barnes walk in the eighth, Cody Bellinger — who was extremely unlucky today — decided to take luck out of the equation by going yard.

Still wasn’t exactly the most dominating showing with just 8 hits and 4 walks on the night, but 2 went for doubles and 3 went for homers. And more importantly, the Dodgers generally made the most of the scoring opportunities they did get.

But the fun was just getting started, as A.J. Ramos got mad and promptly hit Eibner in the ribs with the next pitch after the homer, which was totally on purpose. The next inning, with Giancarlo Stanton leading off, Stripling threw a pitch behind him and was ejected.

The entertaining part was definitely Don Mattingly and Bob Geren going face to face with each other in a screaming match.

This was dumb, as we’ve been over time and time again, but completely expected after Ramos went unpunished for his deliberate act. Hopefully this is the end of it, because the Marlins are trash and players getting hurt would only matter to the Dodgers side of things.

Chase Utley never smiles unless it's the chance to get in Giancarlo Stanton's face in a scrum, I guess. pic.twitter.com/2nHsR2Il6H

Anyway, then came the boring part again, where we were subjected to Chris Hatcher, who gave up two runs on a homer and a sac fly, giving up three hits in his inning and continuing to give up a ton of hard contact.

Unfortunately, the win may have cost yet another Dodger starter, as Puig exited the game after apparently straining his back or oblique on a check swing.

Oblique strains are generally not great, so hopefully it’s not that.

Also, Mattingly truly is an idiot.

Don Mattingly took issue with Corey Seager swinging 3-0 in the seventh inning of a five-run game.

With the win, the Dodgers improve to 25-18 on the year overall and a stellar 15-7 at Dodger Stadium. That puts them back on a nice 94-win pace, though unfortunately the Rockies and Diamondbacks aren’t exactly relenting right now either.