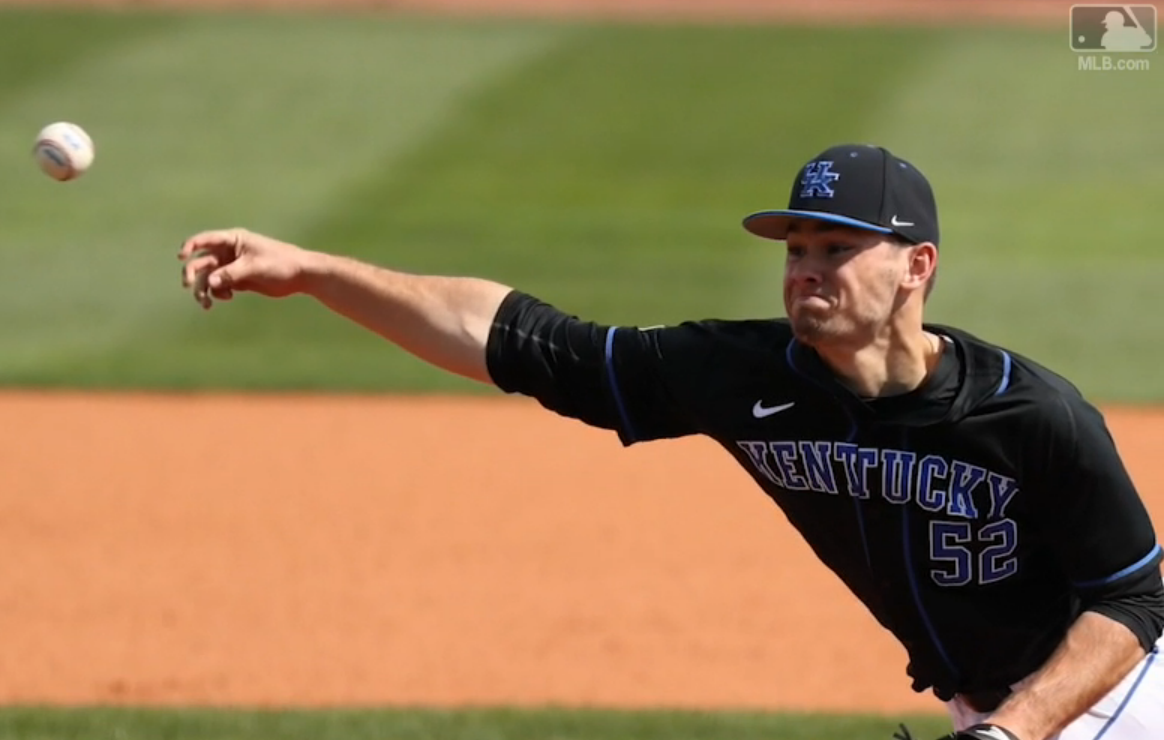 Let’s take a quick look at each of them.

Montgomerie was ranked as the #249 prospect by Baseball America.

Montgomerie was draft-eligible as a sophomore in 2016 but wasn’t selected. He returned to UConn for his junior year and saw an uptick in stuff early in the season, with his fastball reaching 95 mph. The righthander has late life on his high-spin fastball and generates tons of swings and misses, even against good American Athletic Conference hitters. His velocity was more modest in May, and scouts reported him pitching from 89-93. He has a fringy slider and his command comes and goes. Montgomerie struck out 116 batters in 89.1 innings this spring, but also walked 40. He’s well-built at 6-foot-3 and 220 pounds, but a transition to the bullpen could allow his stuff to play up even more.

He was also the #193 prospect at Perfect Game.

Montgomerie possesses the type of build often associated with a starting pitcher at 6-foot-3, 220-pounds and has built a track record to match. He shows a clean delivery and has been up to 95 mph this spring, living within the 90-93 mph for the course of a start while showing both a solid curveball and firm mid-80s changeup for strikes.

Back to back years of the Dodgers taking a player from my mock! Wills Montgomerie has a physical build and a high spin fastball, good K #'s

Pop has never really posted a stellar performance in college, with his best year coming this past season as a junior while pitching 22 games in relief. In those games, he threw 20.2 innings with a 3.48 ERA, striking out 20 but walking 14. That said, most appear to believe he’s a catch of these picks for the Dodgers, believing the stuff will prove to be quality.

MLB.com ranked him as the #95 prospect.

In short stints, Pop works in the upper 90s and can reach 99 mph with nice sink on his fastball. In longer outings on the Cape, he operated at 92-96 mph. He also can overpower hitters with a slider that reaches the high 80s, though it stands out more for its velocity than its sharpness. Pop fiddled with a changeup as a Cape starter but it needs a lot of work and he doesn’t use it as a reliever. He doesn’t have a history of throwing a lot of strikes, and he gets hit harder than he should because he doesn’t command his pitches. Yet if a pro team can polish him up, he has the pure stuff to turn into a big league closer.

Baseball America ranked him at #178.

On most college teams, Pop would be a moment-of-truth reliever, but as senior lefty Logan Salow has filled that role, Kentucky has been able to use Pop as a hard-throwing setup man. Pop, a native of Brampton, Ontario, who has pitched for the Canadian Junior National Team, has a plus 94-96 mph fastball that touches 98. It has late life, but Pop has poor control. His delivery has some effort but there’s also some deception; he cuts off his front side and throws across his body from a lower three-quarters arm slot. His potentially above-average hard 85-88 mph slider gives him a second above-average offering, although he needs to improve its consistency. At its best the slider is tight with late break. He’s also toyed with a below-average changeup. Pop left a game in late April with an arm injury and had not returned by mid-May, clouding his status as the draft approached.

At his best, Pop works from a very tough low three quarters arm slot with some crossfire deception to his delivery; aiding him in his effectiveness in short bursts, but likely precluding him from ever developing as a starting pitcher long term. He has some command concerns too; but in the scope of a power-armed reliever, scouts are optimistic he’ll throw enough strikes. He can work in the mid-90’s with his fastball consistently, touching as high as 97-98 mph at times–an extremely tough pitch considering the deception he creates with his angle and delivery. He’ll flash a 55 slider (on the 20-80 scale) as well; diving it down under the hands of lefthanded hitters and really looking the part of a solid 7th-8th inning type of reliever at the next level.

#Dodgers get a big time power arm in the 7th with Zach Pop @UKBaseball – can sit 93-96, touch 98 with heavy sink. Command needs work

Zach Pop was ranked 138th on my board. Relief arm with + sinker, but slider loses shape in his low slot and production didn't match stuff

Can't thank the @Dodgers enough for the opportunity. Such a world class organization, so happy to be a part of it !

As a junior, Bannon slashed .339/.449/.633/1.082 with 15 homers, striking out 46 times and walking 38 times. Impressive as that sounds, it definitely sounds like this is a pick where the Dodgers will look to save some money to use in order to ink others.

Baseball America ranked him as the #480 prospect.

A streaky hitter in previous seasons, Bannon became more consistent this year, which paid off not only in batting average but also in more consistent power as he hit .325/.439/.618 with 15 home runs and 17 steals. The 5-foot-10, 180-pound Bannon doesn’t project to have anything more than fringe-average power in pro ball, but that may be enough thanks to his defensive chops. Bannon is a plus defender at third base, equally adept coming in on balls, ranging to his left or guarding the line. He moves well enough for pro teams to consider sliding him back to second base as well.

He does fit well at third base, where he projects for average defense to go along with a plus throwing arm; giving him a legitimate third base profile. He also possesses plus raw power, which he’s shown he can get to in game situations with relative frequency. Scouts question the ultimate utility of his hit tool; however, as Bannon’s swing will too often get long and uphill, leading to serious swing-and-miss concerns amongst the industry.

But maybe there might be more there than organizational depth?

Rylan Bannon is a + defender and big time producer at Xavier. Smallish guy but good athlete for a data-driven selection. I had him at 197

Strain, a fifth-year senior, started 14 games and posted a 2.62 ERA in 68.2 innings. He notched 68 strikeouts against 38 walks, giving up just one homer on the year. Still, this looks to be another pick where the Dodgers will aim to save money, especially since he has basically no leverage if he wants to play pro ball.

“He throws a heavy sinker, 91 to 93 (mph). It feels like a bowling ball when you try to hit it,” Carroll said. “The key for him is he was able to get his offspeed over for a strike to feed off it. His ground ball to fly ball ratio is off the charts and being a ground-ball pitcher, you’re going to have a lot of success.”

Strain was not ranked as a prospect by any of the mainstream publications.

Reks was not ranked as a prospect by any of the mainstream publications.

After taking a glut of picks that likely need to be signed to over-slot deals, the savings had to come somewhere, and the picks in these rounds seem directed towards achieving that goal. That’s not to say there was no potential here, as there are a couple upside plays and a few performance-based draftees that could develop into legit prospects.