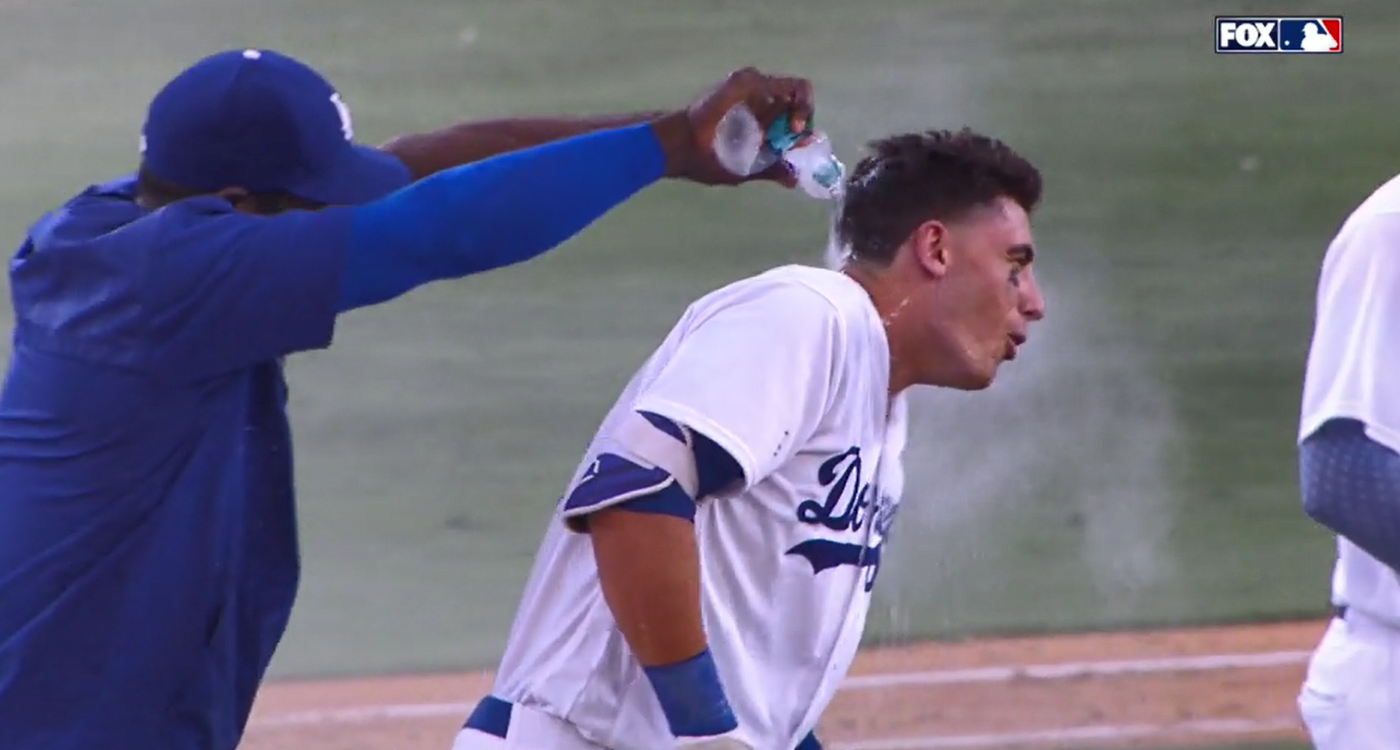 Despite looking like the bullpen had blown a rare game late to lose, the Dodgers stormed back immediately to beat the Royals in extra inning, 5-4. The win extends the winning streak of to five and gets the Dodgers to 25-4 in their last 29 games.

Brandon McCarthy came back off the DL for his continued knee issues, but really it was motivated by a temporary return of the yips on two pitches: his cutter and four-seam. Well, for most of the evening, that was thankfully a non-issue. McCarthy cruised for most of his six innings, as evidenced by his 75 pitches thrown, mainly due to the Royals going after him early in the count.

In the fourth he ran into some trouble after a single, walk, and then another single, but Joc Pederson provided a literal assist by gunning down a runner at the plate.

Unfortunately, a run did score on a pop-up single that Chase Utley got to but couldn’t glove, which was doubly important because had he made the play it would’ve been easy to double off the runner and they would’ve escaped without damage. Fortunately, McCarthy battled back and got two pop-ups to end the threat.

Problems continued in the fifth, though only partially McCarthy’s fault. Things started fine with back-to-back outs being recorded, but after a double there was legitimate worry that the yips started up again following a wild pitch on a cutter that missed by a lot. That was reinforced with another missed target on a fastball, but this time it was mainly Yasmani Grandal that just didn’t glove it, and a passed ball scored a run. The silver lining was that McCarthy eventually got out of it with the lead intact, and he continued on in the sixth without issue.

Likely because he was just on the disabled list, he was removed at that point, allowing two runs (one earned) on six hits and two walks, but only struck out one batter. Overall, it was a nice outing for McCarthy, who seemed to be quite normal throughout.

The reason McCarthy had a lead to work with was that the bats got two runs in the second after Cody Bellinger started things with a walk, and then with one out Joc deposited his eight dong of the year over the fence on a moonshot to right.

The Dodgers got things started again in the third thanks to back-to-back singles from Utley and Corey Seager to put runners at the corners with nobody out. That brought up Justin Turner, who flew out to medium-deep center for an out, but it was enough to easily score Utley from third.

Still, they weren’t able to capitalize on their other chances for a long stretch in the middle of the game, and that definitely put them in a bind.

Brandon Morrow relieved McCarthy to protect a one-run lead and failed his audition as the seventh-inning man. Morrow retired one batter on a strikeout, but allowed three singles and a walk to surrender the tying run and leaving a bases loaded mess as well as the middle of the order for Pedro Baez to clean up. Baez started things by getting a key strikeout of Lorenzo Cain and then preserved the tie by getting Eric Hosmer to ground out weakly to first.

Baez also started the eighth, and for all the effort spent getting out of the seventh, he promptly allowed a homer to Salvador Perez that gave the Royals the lead. He then got one out, but after giving up a hit, Luis Avilan relieved him. Avilan got his man with a strikeout, and exited for Sergio Romo, who also notched a strikeout to keep the game at one run.

That quickly proved important, as Bellinger stepped to the plate in the bottom of the eighth and went with a 3-1 changeup the other way to tie the game.

I had literally just started writing the losing recap and I had to delete about five minutes later.

Can't even write a recap in peace with this team.

Kenley Jansen then entered in a tied game in the ninth, and he did what was expected of him, getting a 1-2-3 inning with a strikeout. As the game went to extras in the 10th, Ross Stripling took over and was greeted immediately with a two-base error as a routine grounder just rolled lazily under Seager’s glove. Stripling worked out of it expertly, getting a strikeout, a fly out, and a ground out to wiggle off the hook.

That proved key, as the bats finally got something going in the 10th. Utley, Seager, and Turner all walked to start the inning to load the bases. That set the table for Bellinger, who proceeded to … well, walk to win the game.

The @Dodgers have won 38 straight games in which they have led, the best streak ever in MLB. (Since at least 1912) pic.twitter.com/u79qScMRvg

Oh yeah, with the Astros losing, the Dodgers now have the best record in baseball.