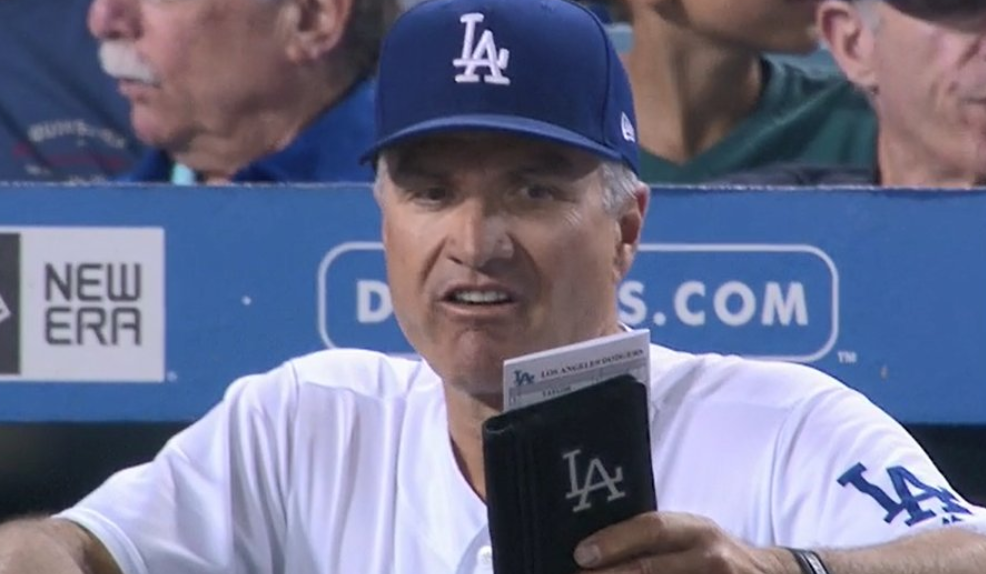 After dropping two in a row to the Braves, the Dodgers have rebounded to win four in a row, including tonight’s interesting 6-2 victory.

Suddenly, the Dodgers are 35-6 in their last 41, and the possibility of besting that 2013 run still remains.

Kenta Maeda can be a frustrating pitcher to watch, as he frequently nibbles and nibbles and nibbles at the strike zone, but that also tends to make him a bit underrated among fans. Maeda hasn’t been great this year, but he’s been about average, and he’s allowed three runs or less in all his starts except for one since April 22. He continued that trend today, allowing just two runs (one earned) over five innings.

There were extremely easy frames and extremely laborious frames, as per usual. Maeda cruised through the first, second, and fourth, but allowed a run in the third on two hits and two walks, escaping a bases loaded jam to avoid disaster. He also allowed a run in the fifth, but that was through little fault of his own, as he should’ve had a 1-2-3 inning. Instead, Corey Seager made an error and two hits later (one of which Seager probably should’ve gloved) the Twins had another run, but thankfully Maeda managed to avoid further damage.

At the end of the day, Maeda surrendered only five hits and two walks in his 91 pitches, striking out four batters and generally remaining effective. In fact, since his first four starts (19 IP) in which he had a 8.05 ERA, Maeda has had an ERA of 3.00 since.

Thankfully, despite facing likely the Twins best starter in Jose Berrios, the bats managed another big inning in the fourth. Cody Bellinger started things with a single and then stole second base, and then with one down Joc Pederson smashed a double off the wall in center to score Belly. Chase Utley followed with a single to put runners on the corners, and he was cashed in by Yasiel Puig on a single. After a sacrifice bunt by Maeda to put runners on second and third, Chris Taylor smacked a two-out double down the left-field line to plate two more.

The Dodgers then got two more in the mess of the sixth inning (more on that later). Joc started things by getting hit, and with one out and Joc on second, Puig blooped a single to center to advance him to third and was thrown out trying to stretch it into a double. Fortunately, Logan Forsythe stepped up a pinch-hitter and drove in a two-out run with a single to center, and he was promptly driven in by another CT3 double.

From there, the bullpen was tasked with four innings to lock down the win, and they managed to accomplish just that. Luis Avilan got a scoreless sixth while striking out the side, and Josh Ravin made his second appearance of the season with the Dodgers in the seventh.

All Ravin did was save the bullpen some innings with three scoreless frames, allowing just a walk and ending up with the save.

Pretty nice when you can roll out four shutout innings in two nights from the 19th and 20th guys on your pitching staff.

Okay, back to the weird stuff, which was the 18-minute delay in the bottom of the sixth. Not entirely sure yet what the delay was over, but it was some kinds of rules thing, which Bob Geren was extremely pleased with.

How much does this actually help the Dodgers? I don't know, but Bob Geren trolling an AL manager is hilarious.

It resulted in the Twins best hitter in the lineup, Eddie Rosario, having to leave the game for Ehire Adrianza in a double switch.

Yasiel Puig being a weirdo.

Speaking of weirdos, Enrique Hernandez did this.

Cody Bellinger also did the defense.

By the way, Alex Verdugo is now untouchable in trade talks.

The win gets the Dodgers to 70-31 on the season and 43-13 at home. Since the Diamondbacks and Rockies both lost, the NL West lead is now up to 12.5 games. The Astros won, however, so the race for HFA throughout the playoffs remains at 2.5 games.