This is, easily, the most difficult trade target to figure out because there’s so many factors involved in a hypothetical acquisition of the 34-year-old Verlander.

The connection to the Dodgers itself is not anything new, as this was a rumor that popped up briefly in the offseason. As such, I wrote about it in November.

“In his prime, Verlander had a mid-90s fastball and two plus-plus off-speed pitches in a curveball and changeup. He has lost a couple ticks on his heater (93.5 MPH in 2016), but it was actually the highest average fastball velocity he’s had since 2013. His curveball and changeup have backed up a little, but he has picked up a slider and used it a lot more in recent years. Regardless, he still gets plenty of whiffs, and in fact, he established his career-high in swinging strike rate in 2016 (12 percent). Verlander dealt with a sore back and triceps in 2015 that caused him to log just 133 1/3 innings — the lowest of his career (not counting his 11-inning debut in 2005). Aside from that, Verlander has been relatively healthy for his entire career, and he has averaged 214 innings per season since 2007 (his second full season at age 24). Seeing as the Dodgers’ team leader in innings pitched last season was Kenta Maeda, that’s an awfully enticing statistic from Verlander.”

For a hard-thrower, the first instinct is to point to velocity for his 2017 struggles, but his velocity on the heater is actually up this season. Depending on the source (FanGraphs or Brooks Baseball), he’s averaging 95.2 or 95.6 MPH on his fastball this season. Using Brooks’ numbers, he hasn’t averaged that much on his fastball since 2011. Unsurprisingly, his velo is up across the board on all his pitches.

Despite the increased velo, he’s not getting as many swinging strikes overall (12 percent down to 9.6), and the most glaring downturn is on his fastball. Verlander had a 13.8 whiff rate on his fastball last season (career-best), but this season, it’s down almost 5 percent to 9.0. His changeup whiff rate is down more than 4 percent, but his slider and curveball are about in line with what they were last season. 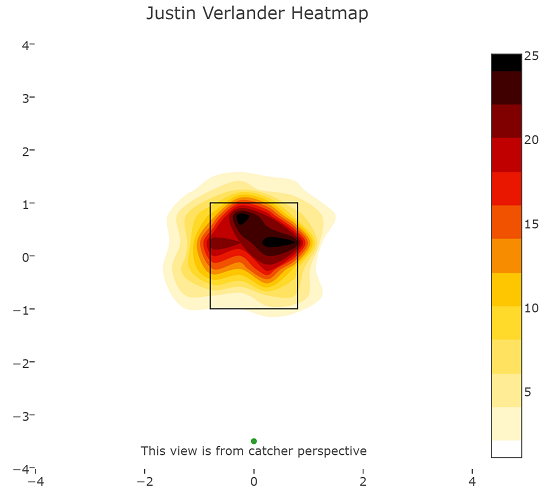 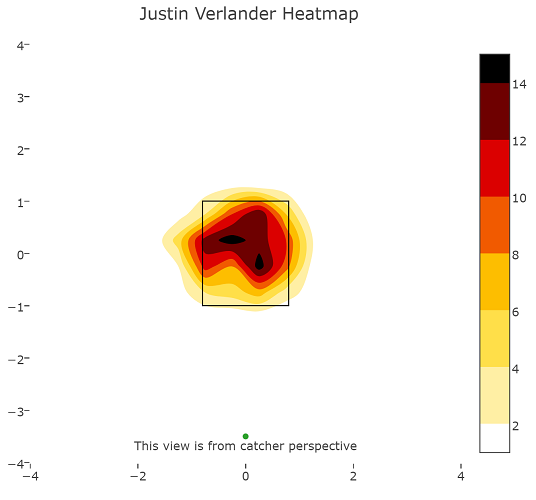 There’s a subtle difference, but Verlander has been more in the strike zone with his fastball than last season. As you can see in 2016, the edges of the strike zone (especially arm-side) are darker than they are in 2017, meaning the fastball is leaking back over the plate.

So the biggest culprit of Verlander’s struggles appears to be his overall command/control, evidenced by his below-average walk rate. Only one other time in a full season of work has he been close to 10 percent, and that was in 2008, when his rate was 9.9 percent. His fastball has been a ball 34.2 percent of the time this season after it was at 31.7 percent last season, and he’s also getting fewer swings at it, with the swing rate down to 48.4 percent from 50.0. That’s something to consider since he uses it almost 60 percent of the time.

Something to consider when thinking about a trade is this bit, from November:

“Verlander has 10-5 rights, meaning he has been in the major leagues for 10 years and has spent at least five consecutive years with the same team, which gives him an automatic no-trade clause. The Tigers are the only organization he has ever known, so if he were to waive his no-trade clause, he might need some sort of guarantee — you know, something like having his vesting option guaranteed? Just thinking aloud.”

Verlander can basically determine where he wants to go, which hurts his trade value a little bit.

It must also be noted here: If the Dodgers (or Cubs) don’t trade for Verlander by Monday, they’ll have an opportunity to do so in August. No one would claim him (outside of maybe Chicago and LA) and the $65-plus million he’s owed over the next 2-plus seasons, so there would be a chance to work out a deal before the Aug. 31 waiver trade deadline.

This is where things get real murky. Verlander’s contract is a monster, and he has an option for 2020 at $22 million that vests if he finishes in the Top 5 of Cy Young voting in 2019. Not a sure thing, but not terribly likely, either. Before that, he’s owed $28 million in 2018 and ’19, with the remainder of his $28 million salary this season still due to him (close to $11 million, per reports). If the Dodgers take that entire deal on, it would severely lessen the prospect/young player cost going the other direction.

One issue is the Dodgers want to reset their luxury tax, especially with the massive free agent class in the 2018-19 offseason — a class that includes Cody Allen, Zach Britton, Josh Donaldson, Yasmani Grandal, Bryce Harper, Clayton Kershaw (when he opts out), Dallas Keuchel, Manny Machado and many more. If they take on any significant portion of Verlander’s deal — despite a lot of guaranteed money set to come off the books — it could make that goal more difficult. So, we’ll have to consider that in these packages as well.

This would be if the Dodgers took on the entirety of Verlander’s owed money. The Tigers would get a low-level power arm in Arzaga, an unpolished but toolsy and projectable infielder in Davis and a close-to-the-majors corner bat in Rios, who could be ready by Opening Day in 2018.

This would be if the Dodgers sent the remainder of Kazmir’s contract (deferred money included), Van Slyke’s salary and didn’t get any money back from the Tigers. Kazmir is owed roughly $21.5 million (thanks to Eric Stephen for the help) for the remainder of his contract (with the Dodgers paying the already deferred amounts in 2019 and 2020). That basically makes Verlander about a $43.5 million commitment for the next 2-plus years, which is more bearable but still a bit on the high side. The Tigers would get a better prospect in Calhoun, who could step into their lineup whenever they deem he’s ready. They also get a young power arm with upside in Sheffield, who is still a work in progress.

This would involve no money changing hands. The Tigers get a couple quality, albeit low-level, prospects in Alexy and Heredia. They also get the upside of Davis and an MLB-ready catcher in Farmer (might come in handy with Alex Avila on the block), while getting out from under Verlander’s $65 million. The Dodgers also get the impact left-handed reliever they “desperately” need in Wilson.

This would be like Package 2 in terms of money, save the amount Wilson will make for the rest of this season and next season (his last season of arbitration). Because of that, the Tigers would end up with a couple better prospects and the Dodgers would end up with Verlander and Wilson. Calhoun is still the big prize, but there are a couple other prospects who are intriguing for Detroit. Peters is a big-time power hitter with a lot of swing-and-miss. Santana is this year’s fast-rising prospect. He’s still a little raw, but he has some of the better upside among Dodger pitching prospects.

Honestly, I’m not enthusiastic about any of those packages. I’m not even sure if Verlander is worth acquiring to begin with because of that scary contract. I’m not even sure any of them are enough to acquire the big righty. It’d be nice to move on from Kazmir, but is it worth it to add the $40-plus million that comes with Verlander instead? If you’re looking for a silver lining, the highest-ranked prospect I have going the other way in any of these deals is Calhoun (No. 5), with Santana being the next-highest (No. 10).

It’d take a lot of creativity to get this deal done. I do like getting Wilson, but I’m pretty sure the Dodgers could swing a deal for the dominant lefty reliever without having to take on that massive contract. Then again, I suppose if Verlander can rediscover any of his 2016 magic, he might be well worth it. Still, even for the team with the game’s highest payroll, I can’t really see a deal coming to fruition. But hey, stranger things have happened.

Dustin Nosler began writing about the Dodgers in July 2009 at his blog, Feelin' Kinda Blue. He co-hosted a weekly podcast with Jared Massey called Dugout Blues. He was a contributor/editor at The Hardball Times and True Blue LA. He graduated from California State University, Sacramento, with his bachelor’s degree in journalism and a minor in digital media. While at CSUS, he worked for the student-run newspaper The State Hornet for three years, culminating with a 1-year term as editor-in-chief. He resides in Stockton, Calif.
@DustinNosler
Previous Dodgers 6, Twins 2: Now 4 wins in a row, and Bob Geren trolled Paul Molitor
Next Twins @ Dodgers July 26, 2017: Stewart for the sweep