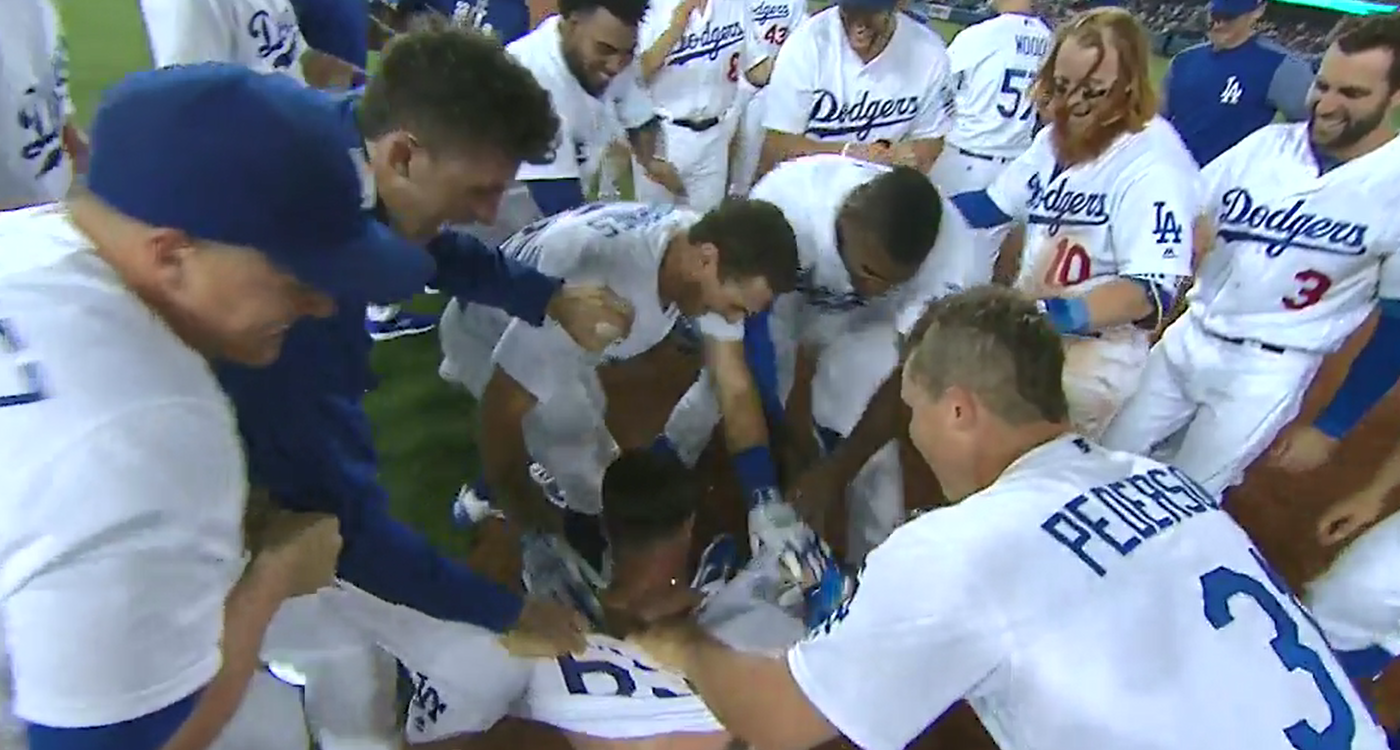 The Dodgers won tonight’s contest to the Giants, 3-2, and thus continued their eight-game winning streak. How did they do it? How else but in comeback fashion and with a walk off? But a guy making his MLB debut? Come on.

Aside from their winning streak, they’re now 39-6 in their last 45 games, as they inch ever so closer to the 2013 team’s run. Honestly, beating that streak is the only tension I have during the games nowadays.

Come on, come on.

Hyun-Jin Ryu turned in a surprise performance by matching Madison Bumgarner pitch for pitch. Ryu threw seven shutout innings in 85 pitches, striking out seven and reducing his ERA to 3.83. He did benefit from some fortune on quality contact, with the Dodgers turning four double plays behind him, but ended up allowing just five hits and a walk on the night.

Plays like Enrique Hernandez‘s throw to end the seventh for the Giants certainly didn’t hurt.

The problem, of course, was that the Dodgers offense didn’t do a thing against Bumgarner, getting shutout for seven innings.

Then when Ryu exited the game, Josh Fields took over and immediately surrendered a homer to start the eighth, breaking the deadlock. Fields then walked a batter and only recorded an out on a bunt that was popped up back to him before being relieved by Edward Paredes. All Paredes did was induce a 6-4-3 double play to get out of the eighth, and he started the ninth as well, notching a strikeout and a fly out. Josh Ravin entered to get the final out of the final inning, and he did so by getting a grounder. 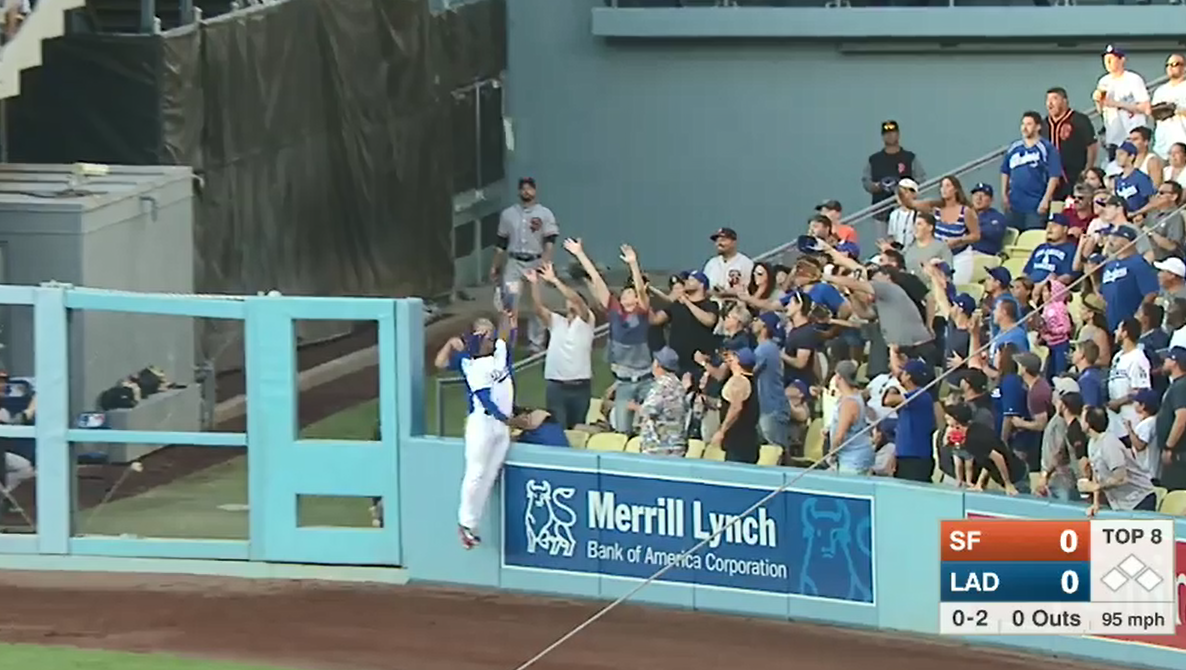 All the work that followed Fields proved to be important, as the bats finally got something going late (again). In the eighth, with Bumgarner finally out, the Dodgers offense showed signs of coming alive a bit. Chris Taylor fell just a few feet short of a game-tying homer, and they eventually worked three walks (one intentionally) to load the bases, but Austin Barnes flew out harmlessly to end the inning.

That set the table a bit for the ninth, where Chase Utley led-off with a hustle single, and he then promptly stole second base on the first pitch. Yasiel Puig then worked a count to 3-2 and completed an outstanding at-bat with a single up the middle to tie the game.

Did he enjoy it? Damn right.

Joc Pederson followed with a ground out, but Puig was running on the pitch, which allowed him to get into scoring position at second. After CT3 struck out, the Giants walked Corey Seager intentionally, and the bases were then loaded after Justin Turner reached on an infield single. Unfortunately, Cody Bellinger flied out harmlessly to left to end the threat and the game went to extras.

Brandon Morrow started the 10th for the Dodgers, and while he allowed a single, a stolen base, and issued an intentional walk, he eventually got a scoreless frame. Morrow began the 11th as well, throwing only one pitch, allowing a single before being relieved by Luis Avilan. Avilan allowed a stolen base, a ground out to advance the runner to third, and a bloop single to center to give the Giants the lead. That led to Pedro Baez being summoned, and he got a double play to keep the Dodgers in it.

Down one going into the 11th, the Dodgers were given hope by a Seager one-out double, which was followed by a Turner intentional walk. Why? Because Kyle Farmer was up next after Bellinger was double switched out of the game. So what did he do? Oh, just a walk-off double to score two.

Kyle Farmer's family waited all weekend to see his MLB debut. They even missed their flight tonight. Here was the reunion after the game pic.twitter.com/OVMxawmlwQ

Giants fans will never stop reminding me that no matter how successful they are, the Dodgers are in their heads 24/7.

The Dodgers improve to 74-31 in 2017 and 47-12 at Chavez Ravine. The Diamondbacks also lost today, which means the NL West lead is at 14 games. Additionally, the Astros lost, so the lead for the best record in baseball is 5.5 games.

After an off-day tomorrow, the Dodgers will be in Atlanta to face the Braves at 1:35 PM HST/4:35 PM PST/7:35 PM EST, and by then they’ll know if they have any new teammates. The mound matchup should be interesting as it pairs Kenta Maeda (4.09 ERA/3.98 FIP/4.36 DRA) with To Be Announced, who has quite the amazing name.