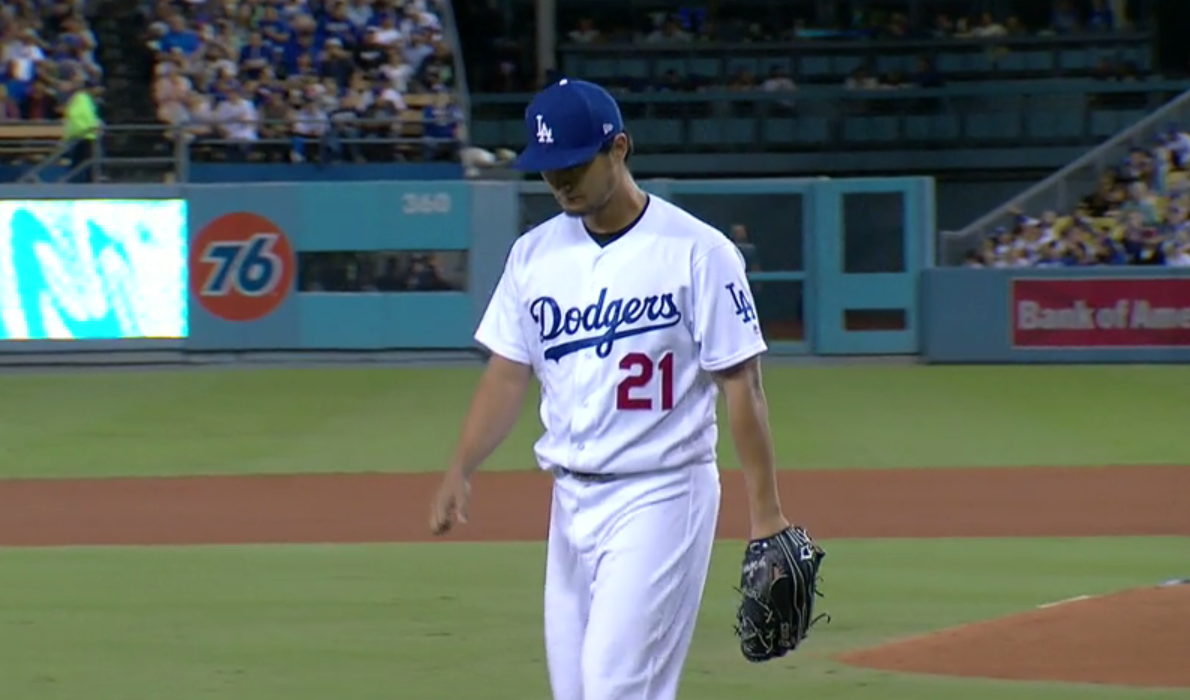 After that admittedly worrying stretch of baseball, the Dodgers have now won four of five after tonight’s 9-3 victory over the Padres.

The #Dodgers win, 9-3. They have reached 100 wins for the first time since 1974 and are the seventh Dodger team to reach the century mark.

Yu Darvish got another crack at the Padres tonight, and he was coming off surrendering five runs on eight hits and three walks in a start earlier this month against the same team. Fortunately, Darvish looked on his game again, starting the game with four perfect innings, including striking out the side in the fourth.

While he did give up a run on a hit-by-pitch and a double in the fifth, he allowed the Padres just one single the rest of the game. Darvish ended up going seven dominant innings on 91 pitches, striking out nine batters and looking every bit of the guy they thought they were acquiring at the deadline.

Darvish has now allowed one run on nine hits, one walk, and one hit-by-pitch in his last 19.1 innings. Decent.

The offense looked as good as they have all season, getting things started in the first. Chris Taylor led things off with a double, then Corey Seager and Enrique Hernandez drew back-to-back walks. Logan Forsythe then plated them all after lining a double to left-center field.

The bats struck again in the second, this time behind a double from Rob Segedin, a sacrifice bunt from Darvish, and a sacrifice fly from CT3. The Dodgers tacked on another in the third behind the suddenly hot Logie Bear, who drilled his sixth homer of the year.

In the fifth, the game was basically blown open, as Enrique and Forsythe both drew walks and Austin Barnes followed by killing a ball to right-center for his eighth homer of the year.

For insurance, Yasmani Grandal notched a double and scored on a Segedin single in the eighth.

Kenta Maeda entered in relief and basically did his job but ran into unfortunate luck and terrible defense. Maeda struck out the first batter, then made a mistake on a breaking ball and hit a man, who advanced to second on a “wild pitch” that was basically a passed ball. He then surrendered a weakly-hit infield single that basically beat the shift, which led to a run scoring on another infield “single” that was probably a double play if Bellinger instead of Segedin were at first. If that wasn’t enough, Maeda induced a perfect double-play ball, but Barnes double-clutched after getting the out at second and threw the ball away, leading to another run scoring. Mercifully, Maeda got out of the inning with an infield fly that the defense didn’t mess up.

Pedro Baez then entered with a six-run lead to protect in the ninth, a situation even he couldn’t fuck up. While he gave up a lead-off bloop single that insufferable fuck fans booed him for, he then rebounded with two strikeouts before giving up a double to put him into trouble. Thankfully for my sanity, Baez got a strikeout to end the game.