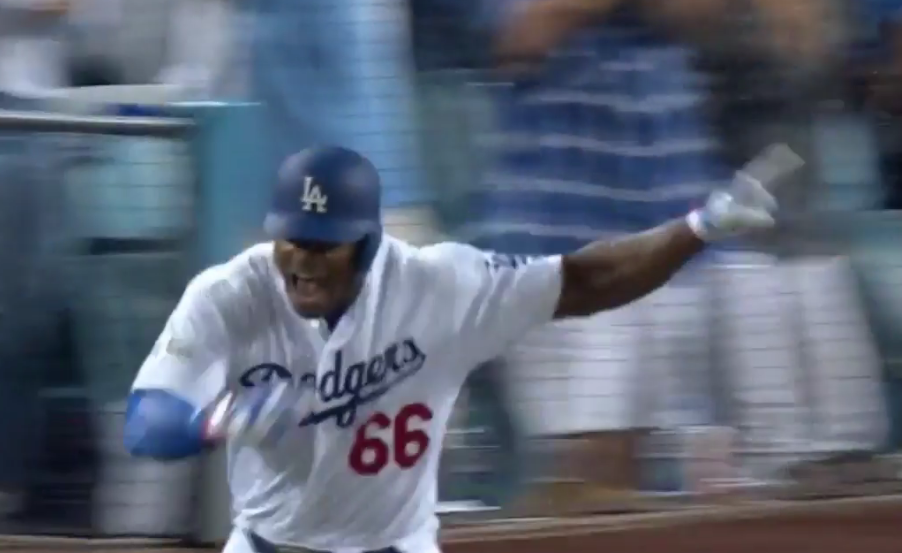 With Game 1 essentially being a game the Dodgers had to have given the pitching matchup, Game 2 was a much better indication of how they might fare in an even contest against the Diamondbacks, especially against a pitcher that has owned them all year. Well, the bats showed out again, launching a 12-hit attack to go along with five walks, helping make sure odd bullpen usage from the manager didn’t matter.

Rich Hill has struggled against the Diamondbacks all year, allowing 11 runs in 19.2 innings over four starts for a 5.03 ERA. Well, one could sort of see why early, as things got off to a poor start in the first when Hill surrendered a monster two-run shot to Paul Goldschmidt. However, that’s all he ended up allowing, as he walked three batters but gave up only two other hits. Hill got four innings on 78 pitches and also struck out four batters.

Not an outing that will go on his highlight reel, but he battled a tight strike zone and did what he needed to do for the team.

Robbie Ray has been a thorn in the side of the Dodgers bats all year, posting a 2.27 ERA over five starts, including a ridiculous 53 strikeouts in 31.2 innings. The primary difference between all of those starts and this one is that he threw 34 pitches and 2.1 innings on Wednesday in the NL Wild Card Game.

Whether it was the short rest or not, Ray certainly didn’t bring his best control, and in the second it led to the Dodgers getting on the board. Enrique Hernandez started things with a walk, and after a Logan Forsythe fly out, Austin Barnes drew a walk of his own. With Yasiel Puig at the plate, Ray uncorked a wild pitch, which moved the runners up to second and third. Yasiel then came through in a way with a weak ground out that ended up driving in a run to cut the Diamondbacks lead in half.

The fourth proved to be the pivotal inning, as the Dodgers secured the advantage. With one down, Logie Bear and Barnes singled to put runners on first and second. Puig then followed with a single as well to load the bases, as he uncorked a hellacious bat flip because fuck it, I guess?

That was the end of Hill’s day, as Kyle Farmer was sent up to pinch hit for him as the only righty on the bench. Farmer battled Ray tough, and fortunately Robbie uncorked one too many pitches in the dirt, which led to Forsythe scoring from third on a wild pitch to tie it.

Farmer did eventually strikeout though, which put the pressure on Chris Taylor with two outs, and he came through with an infield single to plate another run and snatch the lead.

With Hill out of the game, it was the bullpen for 15 outs, and the first man up was Tony Cingrani to get a lefty. Tony induced a ground out, but that was the only batter he faced before being relieved by Kenta Maeda. All Kenta did was notch a strikeout and then induce a grounder to get out of the fifth with a goose egg on the board.

The offense stepped up again in their part of the fifth, as Justin Turner reached on a hit-by-pitch to start and Bellinger traded places with him after grounding into a fielder’s choice, which was the end of Ray’s night and the beginning of Jimmie Sherfy‘s nightmare. Sherfy immediately surrendered a single to pinch hitter Curtis Granderson, with Bellinger going first to third and drawing a throw that allowed Granderson to advance to second. That brought up Forsythe, who came through with a single to left to drive in a run.

Forsythe then stole second, which helped him score easily on Barnes’ double down the line to plate two.

That was the end of Sherfy’s night, and the beginning of Jorge De La Rosa‘s. Continuing the trend immediately, Barnes stole third, and Puig stepped right up and drilled a single to drive in another to extend the lead to 7-2.

That’s where things got confusing, as Maeda resumed in the sixth as expected, and continued to look razor sharp by blowing away J.D. Martinez.

However, despite the fact that Maeda could hypothetically complete the game with a five-run lead, Dave Roberts decided it was time to play matchups and Kenta only ended up getting three batters.

Kenta was looking like he was about to mow down the entire lineup.

I only post those tweets to show that me and many others were confused by this move regardless of outcome, specifically out of concern for what ended up transpiring.

Tony Watson entered the game and was fine to finish the sixth with back-to-back outs. However, he was also left in for the seventh, and immediately gave up back-to-back singles. That brought out Brandon Morrow unnecessarily early if nothing else, and in the worst-case scenario coming true, he gave up a three-run bomb on his first pitch to Brandon Drury. Morrow got the rest of the inning in 1-2-3 fashion with a strikeout, but obviously the damage was done and the leverage was back up. Just completely fucking unnecessary and puzzling.

The only saving grace is the offense continued to scrap, coming right back again in their half of the seventh against Archie Bradley, the best the D-backs have to offer. Again it was Forsythe coming through, started the frame with a single, and Puig followed with a one-out infield single to really get the threat started. Andre Ethier, double switched into the game for Granderson, drew a patient six-pitch walk to load the bases and turn the lineup over. Rather than anybody coming through, however, CT3 was granted a gift on a potential double-play ball as Ketel Marte let it go right through his legs to score a run and push the lead back to three.

All that shit that Dave did meant Josh Fields was tasked with getting as many outs as he could in the eighth before allowing a man to reach, and that was one batter before he gave up a double off the wall.

That led to Kenley Jansen being summoned out of the pen for a five-out save. In the eighth, he got two outs to end the frame. Then he came right back for the ninth and got an easy 1-2-3 inning to lock down the important win.

How did I miss this? I love Rich Hill. pic.twitter.com/TcjiGqKhgG

Again, this broadcasting team is TERRIBLE.

When Goldschmidt doesn't try taking 3B on Puig, Simpson claims Puig likely to throw into dugout. His last throwing error was in 2015 https://t.co/ujI1Mj2Wde

The Dodgers are now up 2-0 over the Diamondbacks in the NLDS. They’re on the fucking verge, man. One more.