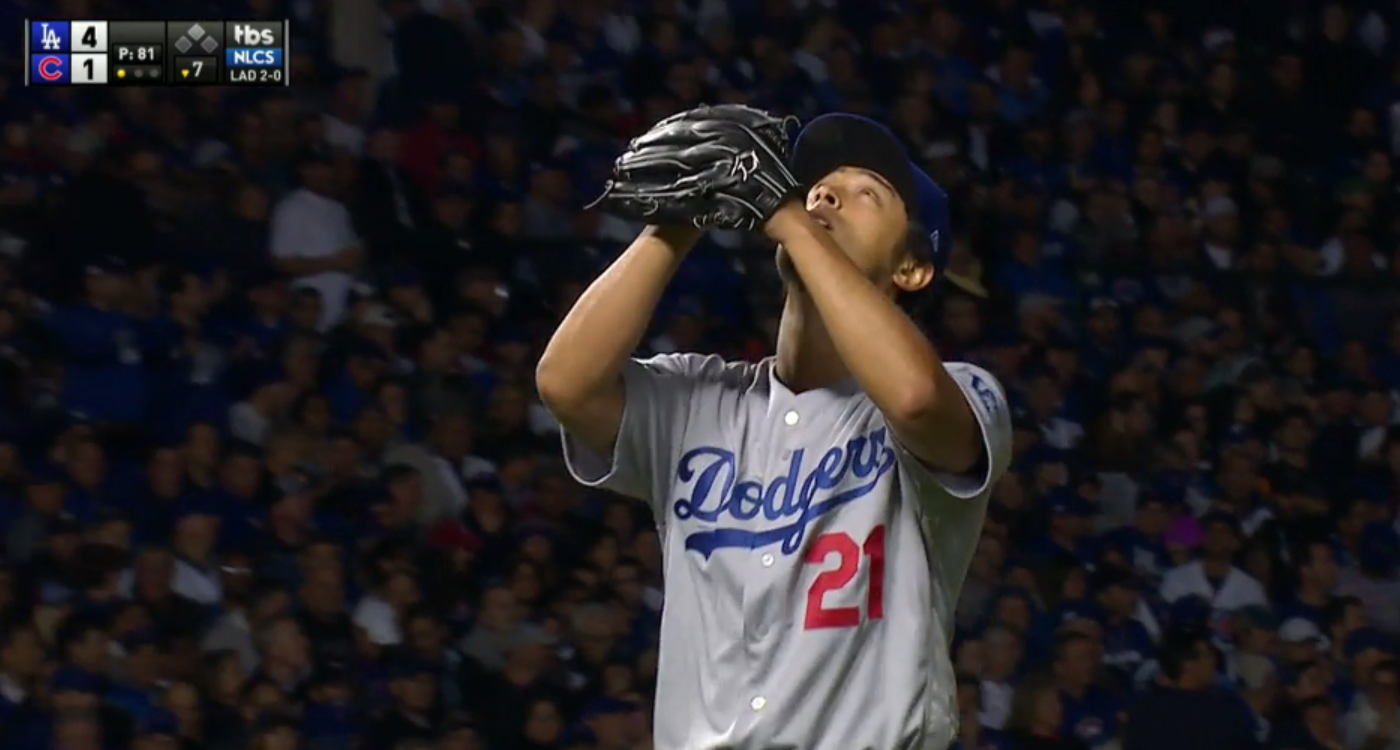 Behind another quality start from Yu Darvish and the offense scrapping together some runs, Game 3 of the NLCS belonged to the Dodgers, 6-1. That puts the good guys up 3-0 in the series over the bad guys, and basically at this point we’re just hoping this is not a replay of the Yankees and Red Sox ALCS from 2004.

Darvish was coming off his four consecutive starts allowing one run or less, including his Dodgers postseason debut in a Game 3 win over the Diamondbacks in the NLDS. Well, he did it again today, giving up just a first-inning Kyle Schwarber homer and wiggling out of trouble in the first and fourth innings. Darvish was efficient again, throwing just 81 pitches in 6.1 innings, surrendering only one walk and six hits while striking out seven batters.

This was exactly the kind of outing the Dodgers had in mind when they dealt for him.

It didn’t hurt, of course, that Darvish had Cody Bellinger behind him on defense.

If nothing else, he’s turning in a ridiculous defensive postseason.

Kyle Hendricks took the mound for the Cubs, and his start is notable for the fact that it’s the first time this series one of their starters is on normal rest. Well thankfully it didn’t seem to matter a whole lot.

From the first inning the bats looked dangerous, with Yasiel Puig just missing a two-run homer in the first. Well, at least we got a bat flip out of it.

Thankfully, Andre Ethier did not miss his homer to start the second, jumping on an 0-1 fastball over the plate and lining one over the wall in right to tie the game, 1-1.

The Dodgers then took the lead in the third, with Chris Taylor getting into a 3-1 count, getting the fastball over the middle of the plate he wanted, and bombing one to center to make it 2-1.

The Blue tacked on another to the lead in the fifth, when Joc Pederson led the inning off with a double and scored on a one-out triple by CT3 that was hit just fair down the line in left to make it 3-1.

The next inning led to even more insurance, though they didn’t exactly get it the way anybody would’ve planned. After Yasiel reached first on an error, Ethier followed with a single up the middle to start a rally and end Hendricks’ night. Carl Edwards emerged from the pen and Chase Utley managed a swinging bunt that led to an out but resulted in runners at second and third, and the bases were soon loaded after that following an Austin Barnes walk.

Joc stepped up to the plate with Curtis Granderson seemingly on deck to bat for Darvish, and while Joc hit a fly ball to medium deep right, it wasn’t deep enough to chance it against Jason Heyward‘s arm. The threat seemed over because Granderson was a decoy and Darvish was allowed to hit. However, that just means you didn’t plan for Darvish’s offensive skills, as he worked Edwards for a four-pitch walk to drive in a run and make it 4-1.

Not gonna be on Carl’s highlight reel.

Fortunately the bats didn’t let up, and the eighth started with a Logan Forsythe pinch-hit walk and a Barnes single. Charlie Culberson then hit for Joc, presumably to bunt, but that wasn’t necessary after a wild pitch advanced the runners to second and third. Allowed to hit, Culberson proceeded to strike out, but Mike Montgomery crossed up catcher Willson Contreras and the ball hit him square on the arm, allowing Culberson to reach first and Forsythe to score, making it 5-1. Kyle Farmer was summoned off the bench to hit for the pitcher, and he did his job by smacking the first pitch he saw for a sacrifice fly to center, scoring Barnes and making it 6-1.

Going back to the other side of things, the bullpen was brought in early as Dave Roberts wanted to avoid taking any chances. Tony Watson entered to get out of the seventh and he did exactly that with a pop out and a strikeout. Brandon Morrow followed in the eighth, and while he did surrender a walk, he got a ground out, a line out, and a strikeout for a scoreless frame.

With a five-run lead in the ninth, Ross Stripling was entrusted to just not fuck it up, but he couldn’t even do that. Stripling proceeded to give up a single and a double before getting needing to be removed to make sure things didn’t get truly worrisome. I’m kinda thinking that if the Dodgers make the World Series, he just lost his spot to Luis Avilan or Brandon McCarthy.

Anyway, Kenley Jansen entered with nobody out and runners on second and third, then proceeded to get a infield pop out and two strikeouts to slam the damn door on the win.

I am excite, folks.

In the dugout, Puig then showed he was definitely still loose. 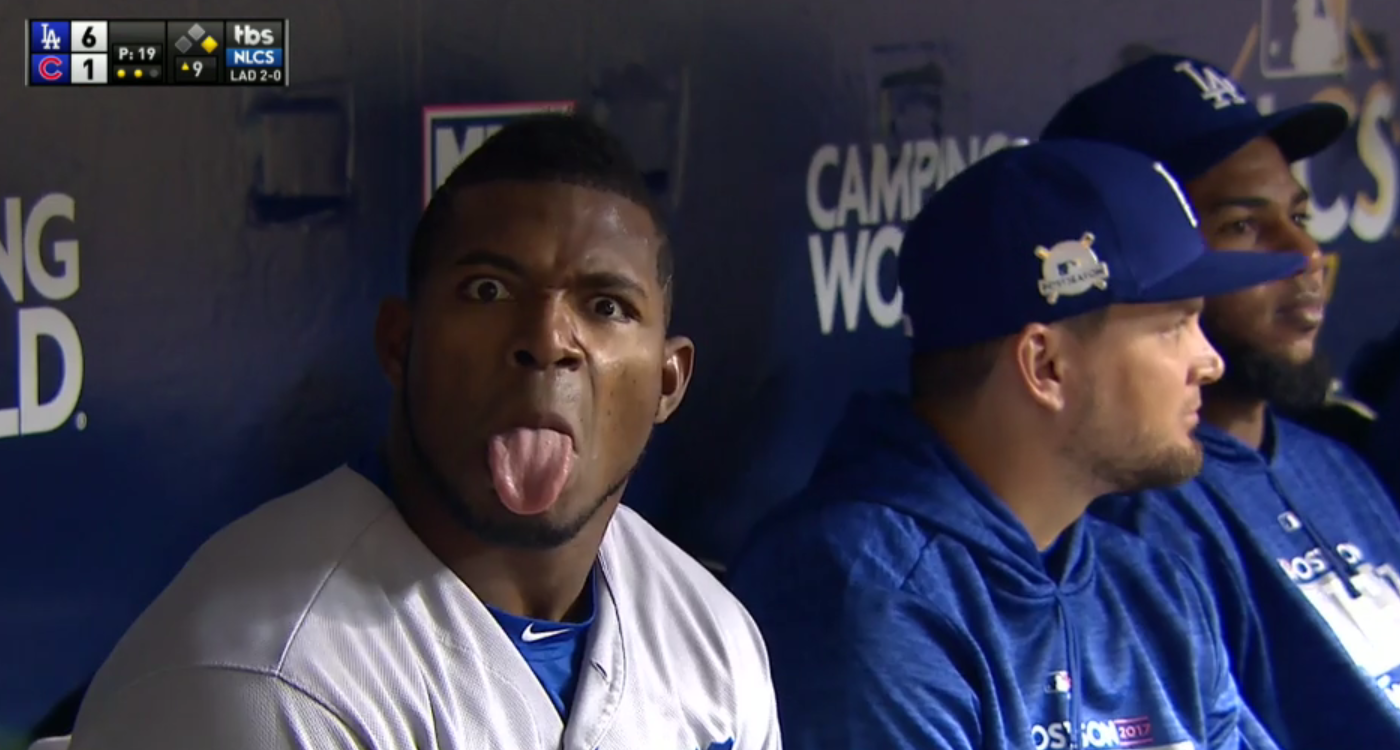 Then threw the camera some side-eye. 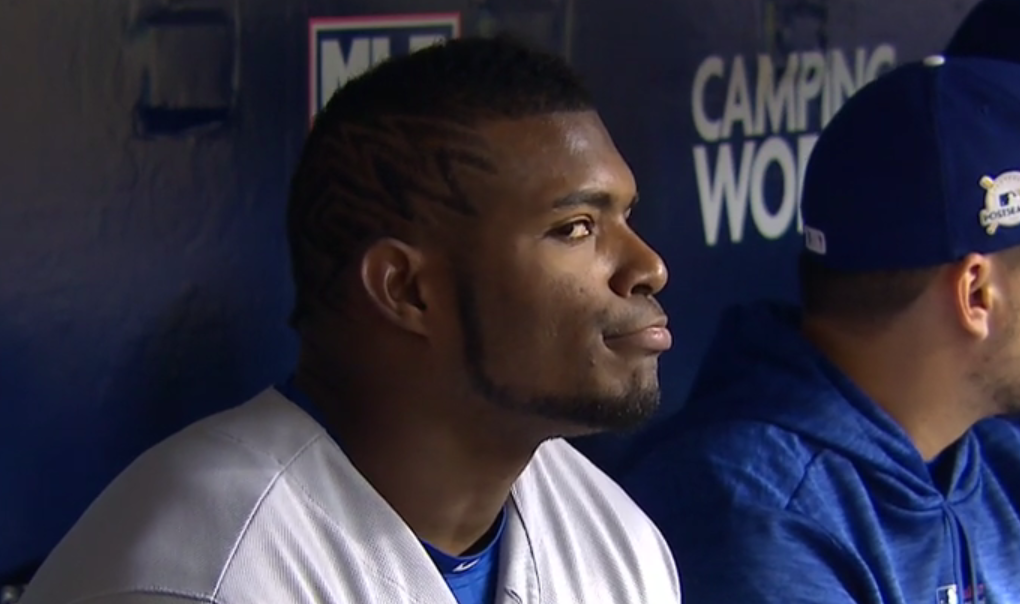 what happens when you award a league championship series to a network that does not cover sports pic.twitter.com/PHd0YazG3R

Folks, the Dodgers are up three games to none over the Cubs in the NLCS, are now 6-0 in the 2017 postseason and are one win away from their first World Series since 1988.

Tomorrow is Game 4 of the NLCS, and it pits Alex Wood on like a months worth of rest against Jake Arrieta. Step on their throats.