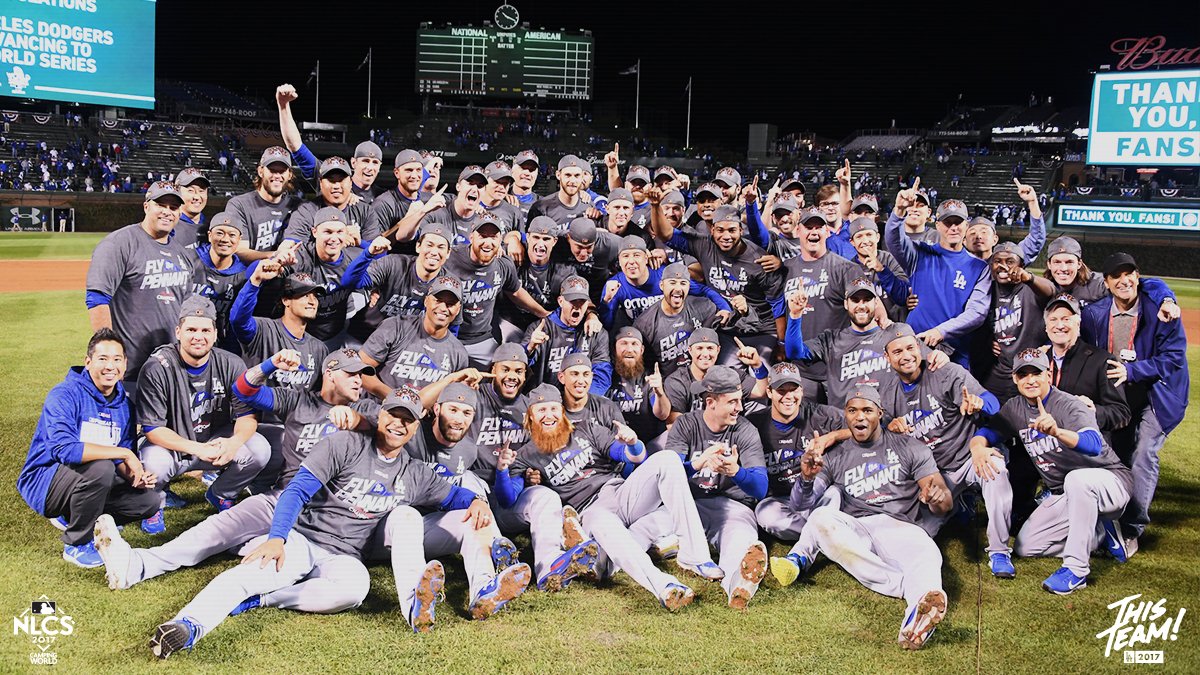 The Dodgers are heading to their first World Series since 1988, where they’ll play either the Yankees or the Astros, but we’ll save the analysis for later. Today is the day to celebrate, and while we’ve already covered the adventures of Yasiel Puig (here) and Enrique Hernandez (here), the rest of the team were no slouches either.

First things first, right? Have to end the game and get that celebration.

One normal celebratory one… 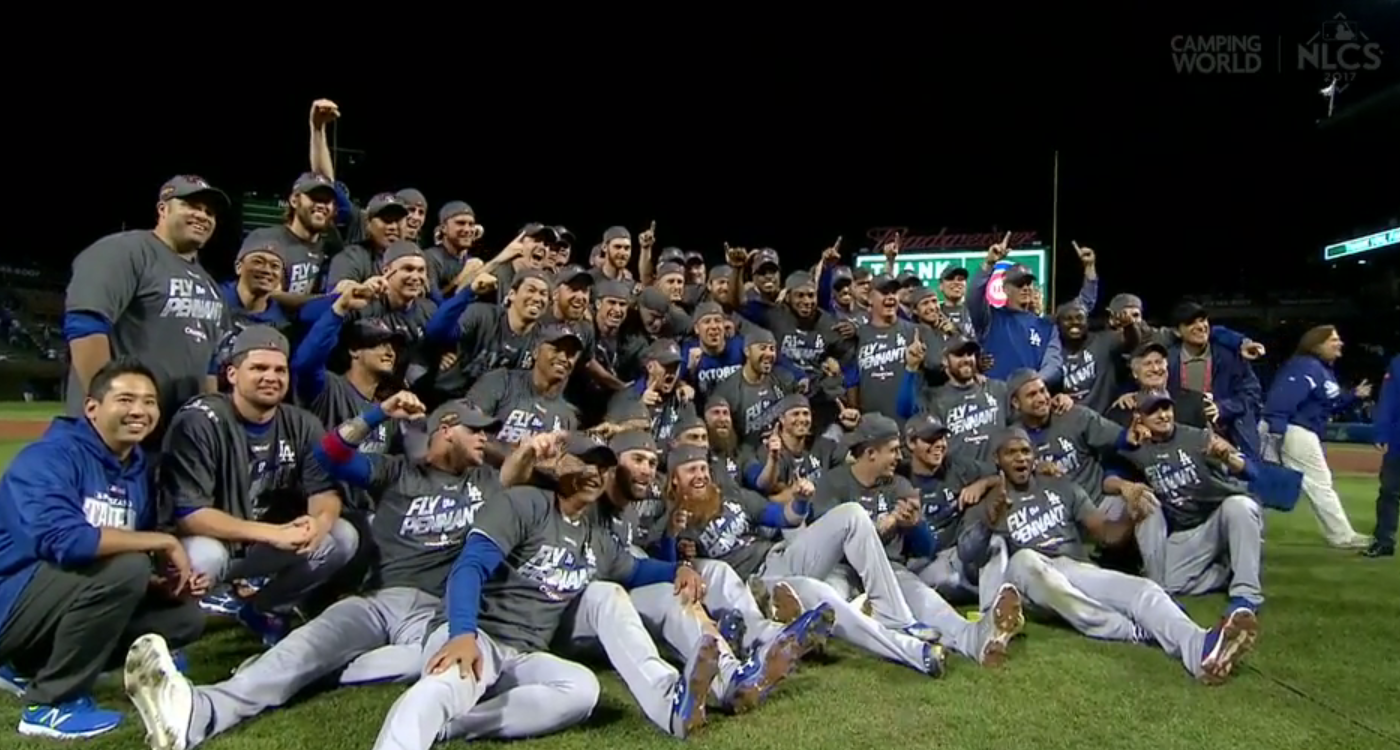 …and then one after Puig yells at everybody to stick their tongues out. 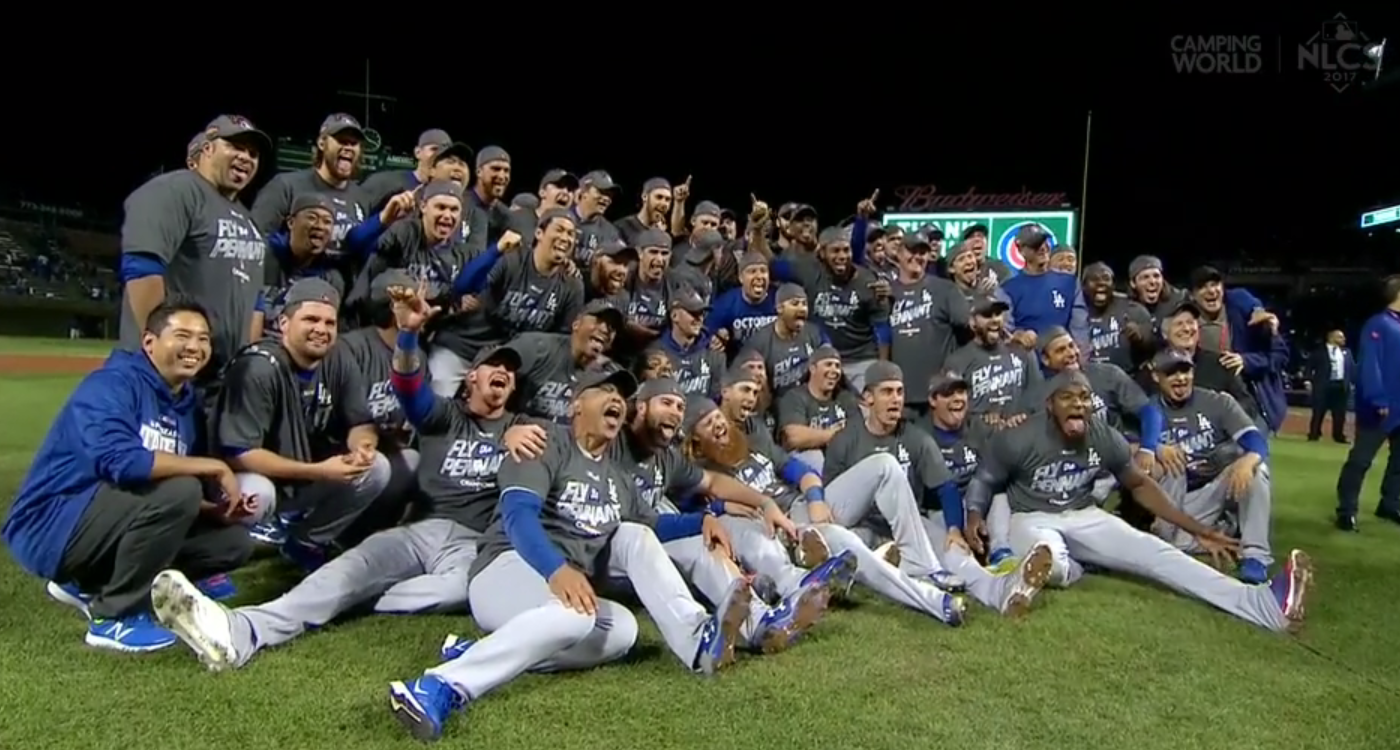 Dodgers fans took over Wrigley Field after the game, as is becoming tradition.

Hell, even the Lakers-Clippers game at the Staples Center got hype for the Dodgers going to the World Series.

Staples Center reacts to the Dodgers going to the World Series for the first time since 1988. pic.twitter.com/nvNAUXK9Vg

I kinda hate the formalities of trophy presentations like for winning the NLCS, but hey, I’m not complaining about anything at this point.

Especially true if Chris Taylor and Justin Turner are being presented with the NLCS MVP.

As for the locker room celebration, this time it was Enrique who was tasked with the speech.

Drink out of the trophy, dammit.

He also provided an outstanding picture.

Meanwhile, Andre Ethier seemed to be enjoying the mood…

…as did Clayton Kershaw… 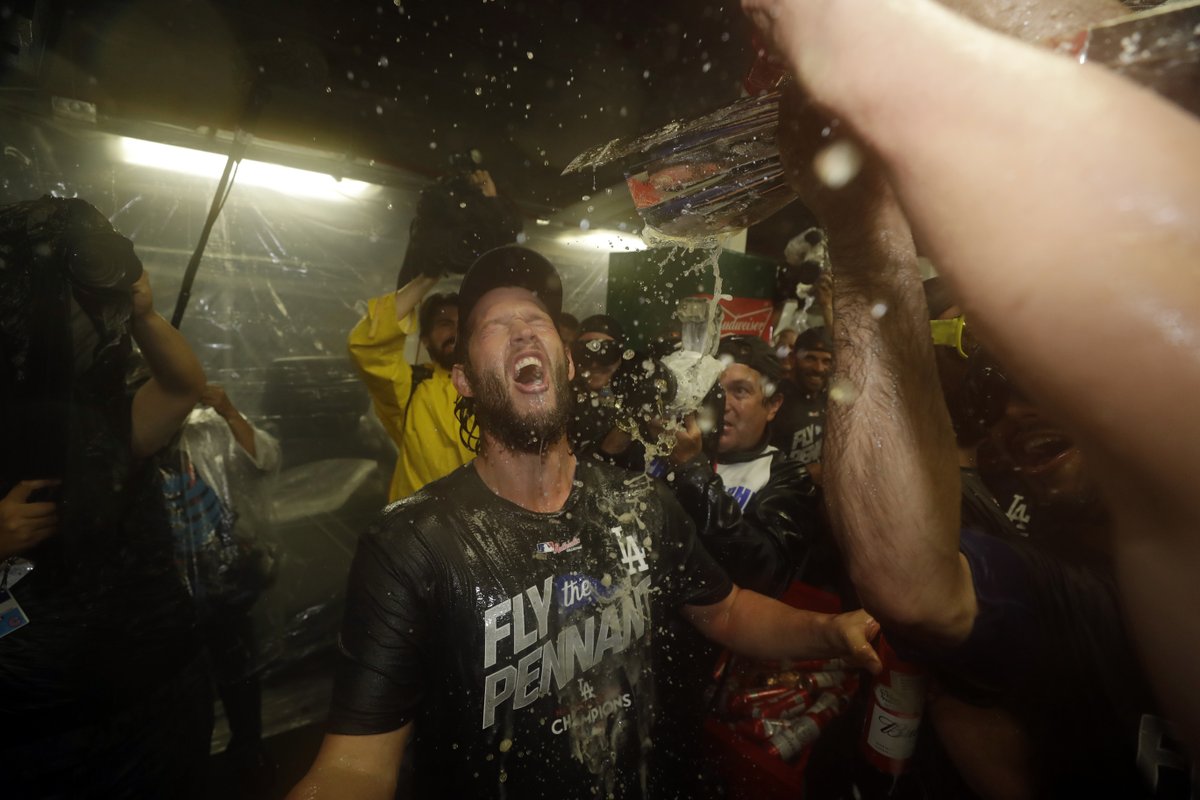 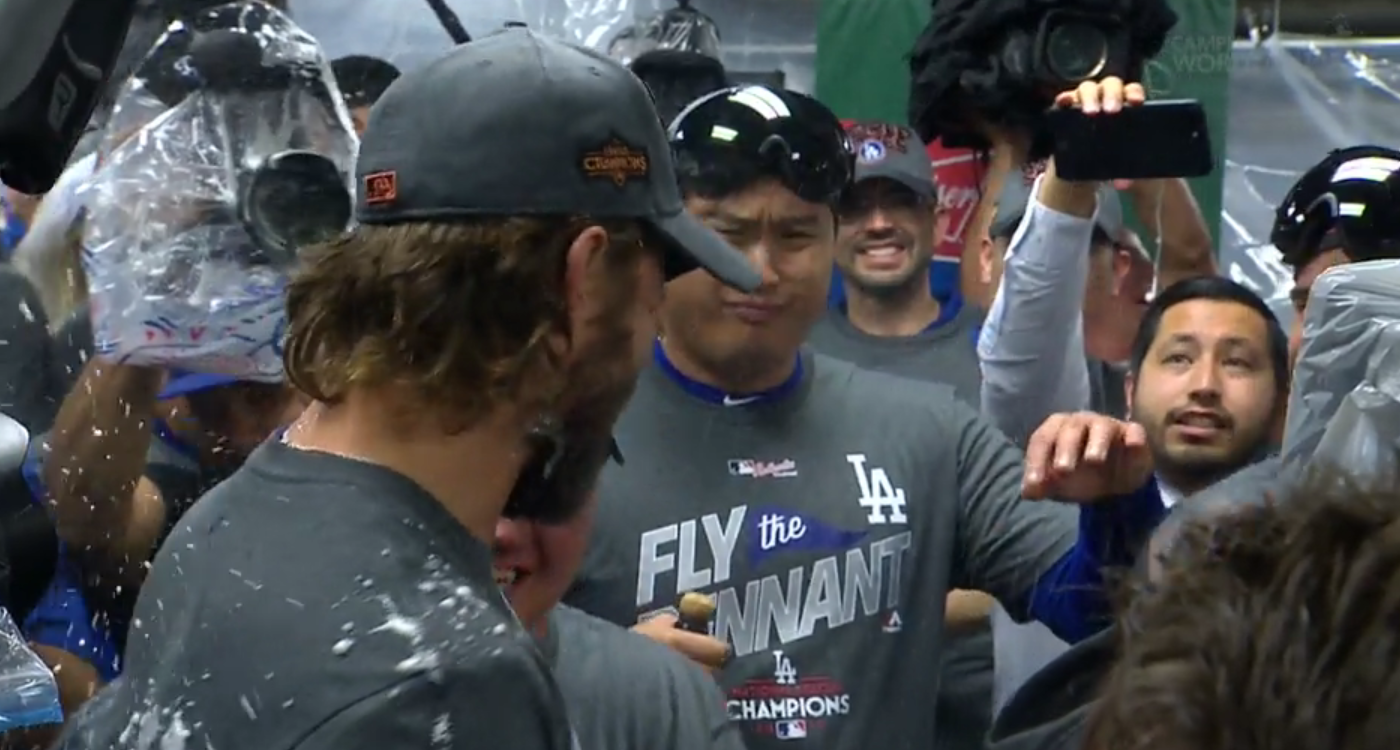 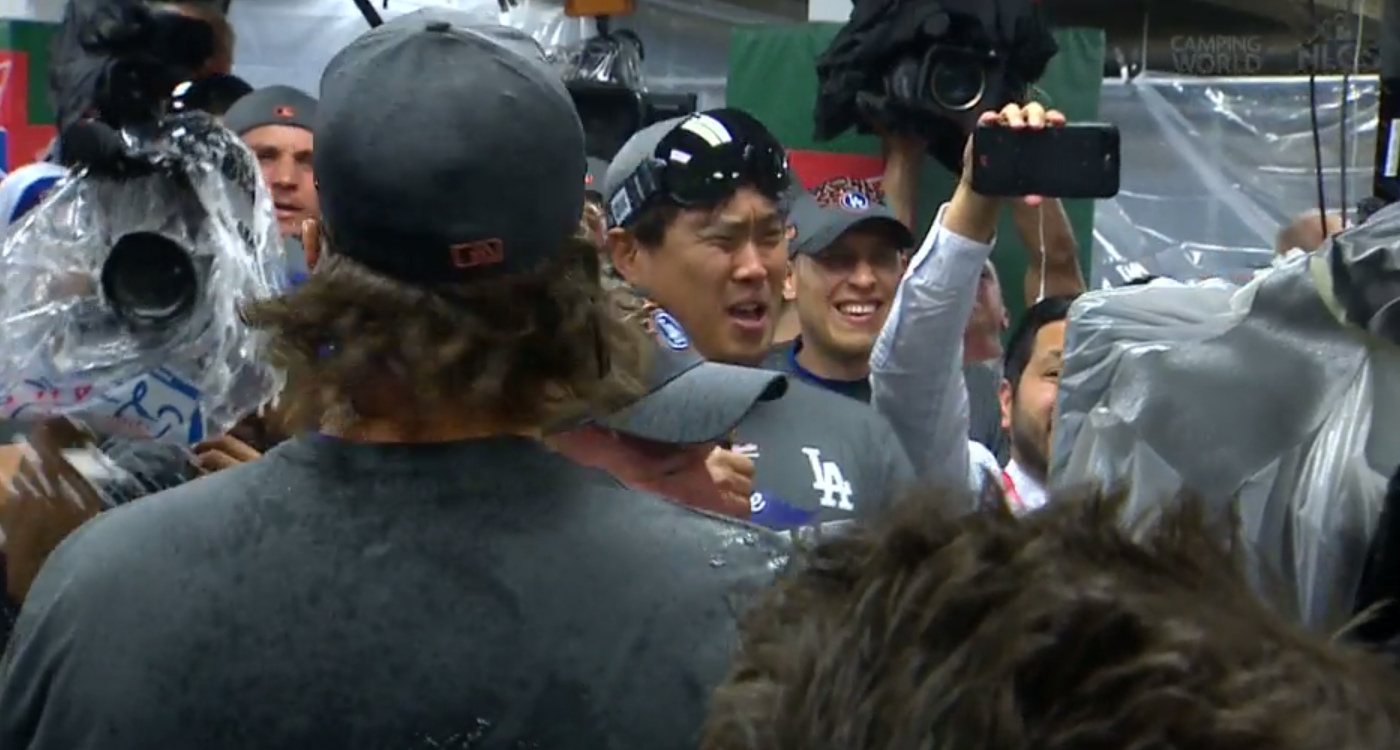 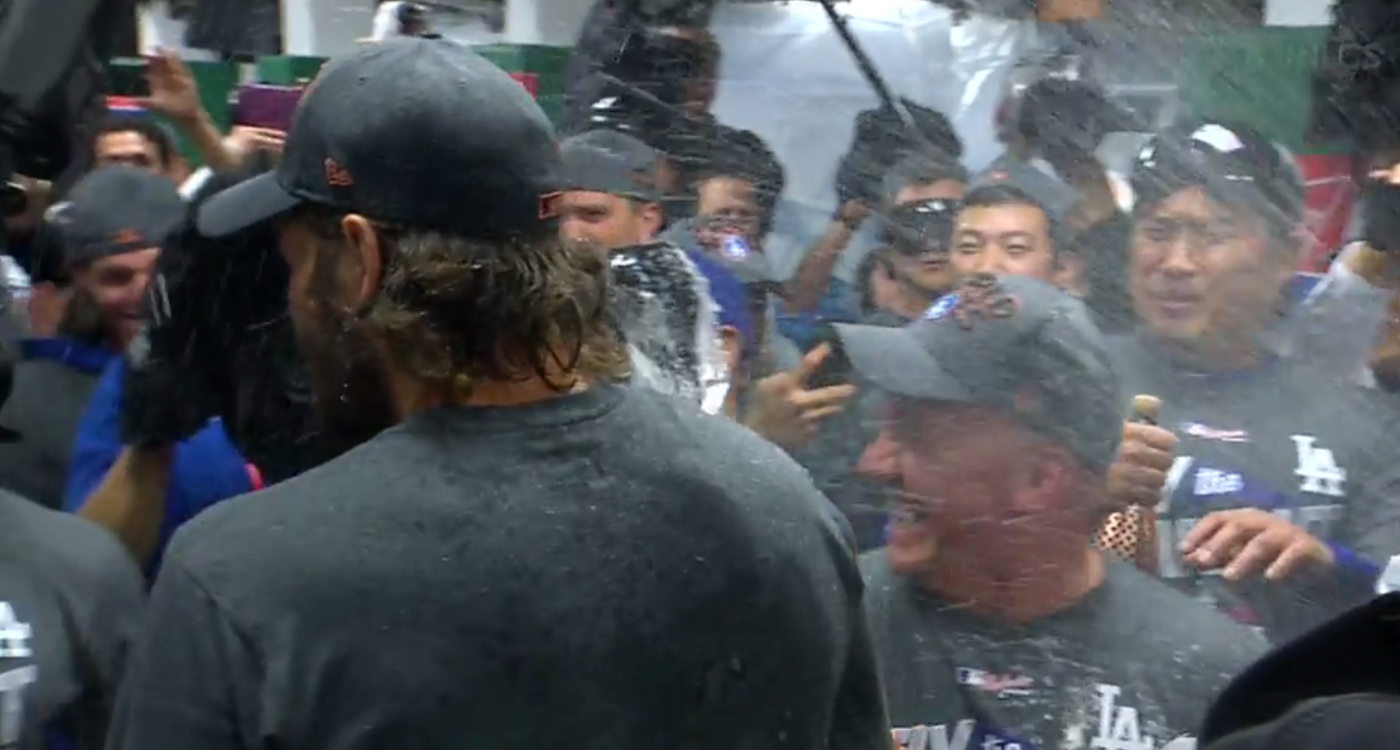 He is the best.

They also poured one out for Corey Seager, who is apparently now dead.

The Dodgers toasted Corey Seager, in absentia. "Pour one out for the homie!" Andre Ethier said.

They didn’t forget Adrian Gonzalez either.

The #Dodgers took turns chanting names & having players drink out of the trophy. They chanted for Seager & Gonzalez, too. #ThisTeam

Kershaw, baby! Getting emotional and shit.

He also got jokes.

A full interview and stuff.

An ecstatic @MagicJohnson caught up with @MikeTrudell to discuss the road for #ThisTeam to reach the #WorldSeries. pic.twitter.com/FSFPwC2lwv

Vin Scully and his family are keeping track of things.

CK played with his kids on the field after the win.

How does Clayton Kershaw celebrate the NLCS? Playing with his kids on the field after the game. #Dodgers pic.twitter.com/TxOuT7QP8L

Yu Darvish sneaked a pic of Kenta Maeda, then told him to check Instagram for a picture.

Maeda is more than game for this.

This is good and they should win the World Series, IMO.

"A highly rational Internet troll." - Los Angeles Times
@ChadMoriyama
Previous Enrique Hernandez promised his mom a homer, did it for Puerto Rico, parodies Yasiel Puig
Next The intangibles of a 111-win Dodgers team