The first two games of this World Series have been entertaining, even if Game 2 didn’t end the way Dodger fans had envisioned. Many have written about how this is a “data-driven” matchup, so what kind of blog would we have here if we didn’t dive into said data ourselves?

The Dodgers have faced two Astros’ starting pitchers and seven different relievers (Chris Devenski twice) in the first two games of the World Series. In total, they’ve seen just 15 curveballs from those pitchers — seven from Justin Verlander and eight from Will Harris — both in Game 2. They’ve swung and missed at three of them and are a total of 0-for-5 against them so far.

It’s strange they’ve faced so few curveballs since the Astros threw the hook with the 4th-highest frequency of any team in baseball (behind the Clevelands, Dodgers and Red Sox). Well, that’s exactly what they’re going to see in the next two games. A lot.

Lance McCullers and Charlie Morton — Houston’s Game 3 and Game 4 starters — are going to bombard the Dodgers with curveballs. By FanGraphs pitch value, McCullers and Morton had the 4th- and 5th-best curveballs in the game (minimum 100 IP), sporting runs above average marks of 15.5 and 15.2, respectively. Both of them threw it a lot in the regular season, but no one threw it more than McCullers (not even Rich Hill). Here’s a usage/result breakdown of McCullers’ curveball in the regular and postseason.

The usage has increased in the postseason, thanks in part to Game 7 of the ALCS that saw McCullers throw 24 consecutive curveballs to the Yankees to end the game, but his curveball usage rate in the playoffs was still up significantly before that outing.

For good measure, here’s the same table for Morton.

So, Morton’s curveball isn’t exactly a swing-and-miss offering, but he still throws it with more frequency than any non-fastball pitch.

The Yankees, which faced two of the highest curveball usage teams in Cleveland and Houston, had a .244 wOBA against curves in the postseason after posting a .274 wOBA as a team in the regular season. The Dodgers’ wOBA is down significantly from the regular season (.216), but that could be chalked up to small sample size. They led baseball in batting average (.265), wOBA (.329) and ISO (.180) against curveballs during the regular season. Admittedly, McCullers’ curveball isn’t your standard curve, as he throws it in the mid-80s and it almost acts like a slider at times, but the Dodgers and their veteran/good lineup is just the kind of group that could give McCullers (and Morton) some issues by simply not swinging at it.

Here’s a visual of where McCullers’ curveball has ended up. 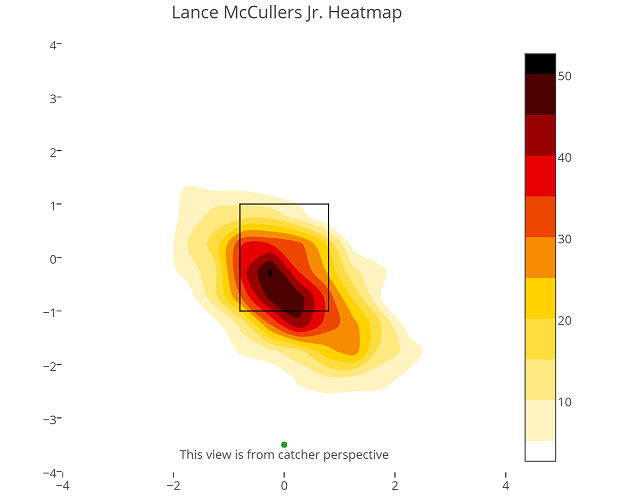 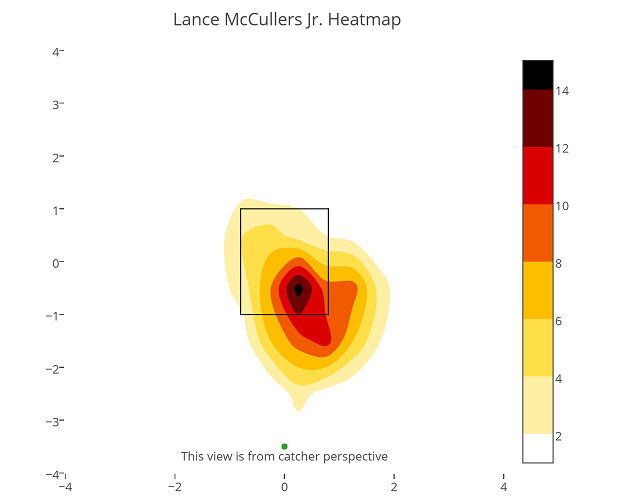 He’s been a lot better at keeping the ball down in the strike zone this postseason. With the Dodgers’ strong pitch recognition and ability to hit curveballs, they just need to lay off the low pitch. Easier said than done, I know, but they’ve worked the count all throughout these playoffs, even if the first two games of this series hasn’t seen the same amount of discipline (that’ll happen when a team throws two legit aces with plus command of their pitches).

Some sample sizeness involved here, but it isn’t surprising to see the good hitters near the top of this list. It’s a little surprising, however, to see Seager and Taylor so low, but they’re two of the team’s best hitters so I’m not too concerned. And I only included Utley because he had a larger sample size and there’s a non-zero chance he starts one of the next two games (even though he probably shouldn’t).

This isn’t meant to sway opinion or do anything but inform folks of what will probably happen in these next two games. The Astros’ starters are going to throw a ton of curveballs, most of which are good curveballs. The Dodgers are good at hitting curveballs. We’ll see how it plays out this weekend.

Dustin Nosler began writing about the Dodgers in July 2009 at his blog, Feelin' Kinda Blue. He co-hosted a weekly podcast with Jared Massey called Dugout Blues. He was a contributor/editor at The Hardball Times and True Blue LA. He graduated from California State University, Sacramento, with his bachelor’s degree in journalism and a minor in digital media. While at CSUS, he worked for the student-run newspaper The State Hornet for three years, culminating with a 1-year term as editor-in-chief. He resides in Stockton, Calif.
@DustinNosler
Previous Yu Darvish’s cutter could be the key to stopping the Astros
Next Dodgers @ Astros Oct. 27, 2017: World Series Game 3