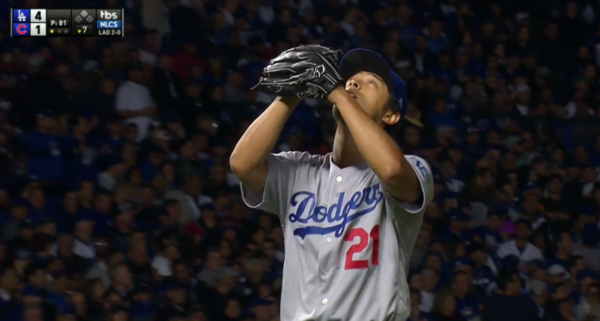 This is not an in-depth analysis. Instead, this is just a quick mention of a significant trend in how Yu Darvish is pitching, written in the 20 minutes or so I have to write a thing right now.

Yu Darvish has been incredibly good in his last five starts, which span the end of the regular season and the start of the postseason. In those five starts he has pitched 30-2/3 innings, allowed 4 runs (3 earned), struck out 35 batters, and walked two. Jeff Sullivan of FanGraphs went in-depth on mechanics changes which helped kick off the streak, but Darvish has made another significant change recently which corresponds to this run of success.

Darvish’s pitch use against all batters starts to tell the story: 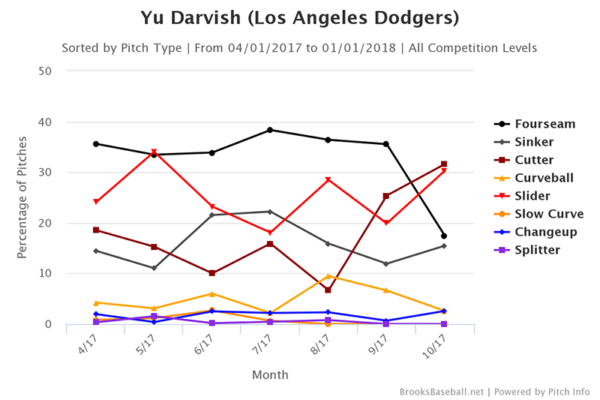 You can see the cutters start to increase in September and take off in October. However, that omits some significant information. Look what happens when we limit the pitch-usage to left-handed batters: 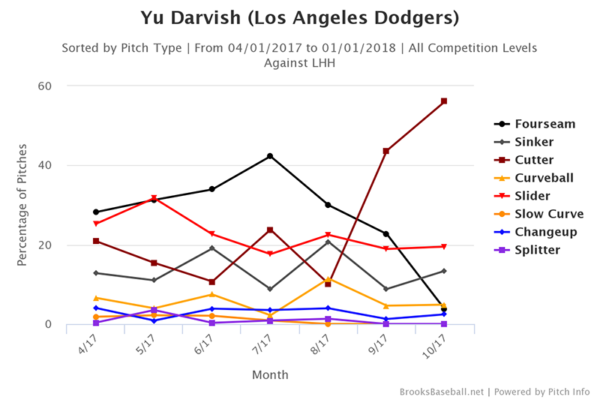 That is an incredibly dramatic change in approach, and so far it has paid dividends. While left-handed hitters are doing well when putting the cutter in play, overall they are hitting just .136/.164/.254 in 61 plate appearances in this five-start stretch. Darvish has struck out 21 of the 61 left-handed batters he has faced, against just one walk and one hit-by-pitch.

Or, to sum up the predictability in table form:

So far this tactic has been working because batters are not swinging at the pitch. Of the 49 first-pitch cutters to lefties since mid-September, batters have only swung at 14. In the playoffs, Darvish has thrown 20 first-pitch cutters to left-handed batters (to just two non-cutters), and batters have swung at 7. One of those seven swings was a dinger hit by Daniel Descalso, which accounted for the entirety of the runs Darvish allowed in his start against Arizona.

Part of Darvish’s success tonight will be based on the ability of the Astros to adjust. They will be starting Josh Reddick and Brian McCann, who are left-handed, as well as the switch-hitters Carlos Beltran and Marwin Gonzalez. If they swing early against the cutter, the numbers say the pitch is hittable. However, if Darvish gets ahead in the count, he starts to mix in many more sliders and the hitters will be in trouble. If I know this, the Astros know this as well (but the Cubs knew it too), and Darvish may need to counter-adjust to come out on top.

Daniel Brim grew up in the Los Angeles area but doesn't live there anymore. He still watches the Dodgers and writes about them sometimes.
@danielbrim
Previous Podcast: ‘Dugout Blues’ World Series Game 2 recap
Next Dodgers are about to face an onslaught of curveballs from the Astros