If you were looking for a repeat of the pitcher’s duel between Clayton Kershaw and Dallas Keuchel in Game 1 of the World Series, Game 5 was anything but. Both starters had poor command, and neither were involved in the decision. Each were roughed up by the opposing lineup and were removed from the game early on. It didn’t help matters that the strike zone was shit.

Kershaw had pitched dominantly, despite all the home runs, through most of this postseason. There’s really no way to sugarcoat this, however. Tonight he sucked. Obviously this was probably the most important start of his career, one that would finally put his notorious postseason struggle narrative firmly in the past. Unfortunately, he did not have his best stuff and a four-run fourth inning and subsequent shaky fifth frame doomed his start and maybe even his legacy as the player who would bring a long-awaited championship to the city of Los Angeles. At some point you have to put the blame squarely on the players who fail to perform on the biggest stage.

The offense did what they could to pick up Kershaw, giving him three early runs to work with.

They even battled back after the Astros scored four times in the fourth off Kersh, as Cody Bellinger‘s three-run home run in the fifth gave them the lead back temporarily.

But the Astros swung the pendulum quickly back in their favor with a three-run fifth as well to tie it up 7-7.

With a spent bullpen, Dave Roberts went to Brandon Morrow for the third straight game, and everything went to hell. The relentless Astros scored four runs in the seventh and one in the eighth. The Dodgers scored a run in each of the seventh and eighth innings, and an incredible three-run ninth tied up the game at a dozen runs apiece.

It was all for naught when Alex Bregman walked it off in the bottom of the tenth against Kenley Jansen to win Game 5 and pull Houston within one win of a world championship.

This game was all about the offense. There were seven home runs, 24 runs total, 400+ pitches and a game time of 5 hours 17 minutes.

It’s hard to remember, but at one point Kershaw and Keuchel were pitching.

Keuchel was anything but sharp in a 32-pitch first inning, and the Dodgers struck first. They loaded the bases up with one out after a leadoff single by Chris Taylor and consecutive walks to Justin Turner and Enrique Hernandez. Game 4 hero, Bellinger, struck out aggressively with the bases juiced. Up came Logan Forsythe, possibly the greatest hitter in World Series history. Logie Bear, Keuchel’s college teammate, proceeded to single to left field where the ball got away from Marwin Gonzalez on a bit of a strange bounce. Two runs scored.

The Dodgers then plated a third run on a botched pickoff. Yuli Gurriel‘s throw was wide to second, and he drew the error. Karma comes at you fast. Forsythe got into second safely while Kiké scored. The call at second was challenged by the Astros but not overturned.

Clayton Kershaw was doing his usual great things at first anyway, and he didn’t allow a base hit until the third inning when Evan Gattis led off with a single to center. No worries, the base runner was quickly erased when Gonzalez hit into a smoothly executed 5-4-3 double play. Kershaw was cruising with a three-run lead through three frames, but not everything was going the Dodgers’ way. 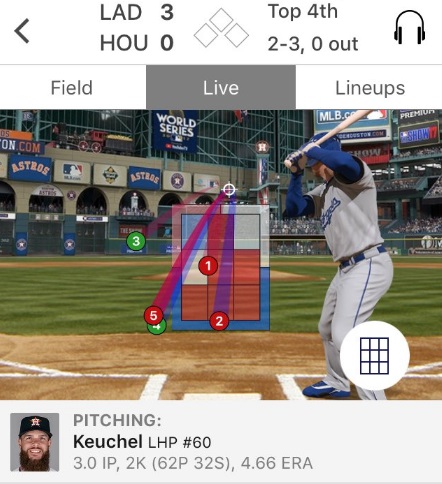 Complaining about the zone is lame, fine. But this is fucking not close. pic.twitter.com/1L29pyEMFq

Bill Miller was my favorite umpire. I wonder why

Anyhow, the Dodgers scored again in the fourth despite the #UmpShow’s best effort to slow them down. Forsythe doubled, and Austin Barnes came through with a two-out RBI single to left to give the Dodgers a comfortable 4-0 lead against Keuchel, who clearly didn’t have his best stuff.

The Astros, the great offensive team that they are, weren’t going to go down easy. They plated their first run in the bottom of the fourth off Kersh, cashing in the leadoff walk to George Springer. Jose Altuve, who had been relatively quieted by Dodger pitching this series before tonight, finally made the train whistle blow with a RBI single to left. Carlos Correa doubled. Then, up pop the devil. Gurriel hit a no-doubt three-run home run to tie up the game 4-4. Let those postseason narratives flow.

Clayton Kershaw is the first pitcher to ever allow 8 HRs in a single postseason. #WorldSeries

ANYHOW, the Dodgers weren’t going quietly into the night. With some help from the Houston bullpen, the Dodgers recaptured the lead with a crowd deflating three-run shot by Bellinger in the fifth off Collin McHugh.

At 22, Cody Bellinger is the youngest player to homer in a World Series game since Miguel Cabrera did it in 2003.

Roberts took out Kershaw with two outs in the fifth, making way for Kenta Maeda. Maeda has been great out of the pen this postseason, but Altuve happened. His monstrous three-run home run in the bottom of the fifth reset this game, 7-7.

We have run out of things to say about @JoseAltuve27. #WorldSeries pic.twitter.com/unwtJaxPpT

With all the back-and-forth lead changes, I felt like I was back at Dodger Stadium for last Wednesday’s fiasco.

This is giving me Game 2 flashbacks 🙀

Despite the obligatory failed bunt in the seventh inning, the Dodgers took a 8-7 lead after Bellinger tripled past a diving Springer. The ball rolled all the way to the wall, and Hernandez came all the way home from first base. I have no idea why Roberts was bunting in that situation, especially with Turner ALREADY in scoring position with a bum leg.

Now the bullpen would be tasked to get nine outs and preserve a one-run lead.

In comes Morrow. The same guy that Roberts insisted wouldn’t be pitching tonight. Well, wouldn’t you know, Springer hit a solo homer on the first pitch he sees. 8-8. Then Altuve happened. Again. A double over Joc Pederson‘s head gave the Astros a 9-8 lead. Tony Cingrani wasn’t warmed up or something, and Morrow was left in to die. Correa then hit a two-run homer to extend Houston’s lead to three runs.

The Dodgers tacked on another run in the eighth on a Corey Seager RBI double, but nothing was going to stop the H-Town train this time. The pain continued into the bottom of the eighth, and Brian McCann homered off Cingrani to give the Astros a 12-9 lead.

If things couldn’t get any wilder, the Dodgers pulled within a run with a two-run Yasiel Puig homer with one out in the bottom of the ninth. Barnesy then doubled to the gap, and the Dodgers had the tying run in scoring position. Pederson’s groundout moves Barnes to third base with two outs. CT3 then does what he has done all season long … he tied the game with a RBI single up the middle!

Jansen pitched a scoreless ninth, and this deliriously ridiculous game went to extra innings. Unfortunately, Kenley and the Dodgers couldn’t hole up the damn any longer, and Bregman’s RBI single let the flood waters gush out in the bottom of the tenth to give the Astros the win, the final home game of the season for them.

The Dodgers are now 9-4 in the playoffs and down 3-2 in the World Series. They’ll need to come up with two straight wins in Game 6 and Game 7 at Dodger Stadium on Tuesday and Wednesday in order to win it all.

Rich Hill will take on Justin Verlander on Halloween in Game 6, which could potentially be a very scary night for us all.

Stacie Wheeler, born and raised in So Cal, has been writing about the Dodgers since 2010. She wrote daily as the co-editor of Lasorda's Lair for five long years, and she has also written for Dodgers Nation, Dodger Blue 1958 and The Hardball Times. She currently contributes to True Blue LA. Stacie graduated from the University Of Southern California with a bachelor's degree in Cinema-Television. You can also watch her videos on her YouTube channel, DishingUpTheDodgers.
@StacieMWheeler
Previous Dodgers @ Astros Oct. 29, 2017: World Series Game 5
Next Dodgers lost Game 5 for one reason: Clayton Kershaw