Dodgers 3, Astros 1: Rich Hill & the bullpen shut the Astros down to take Game 6 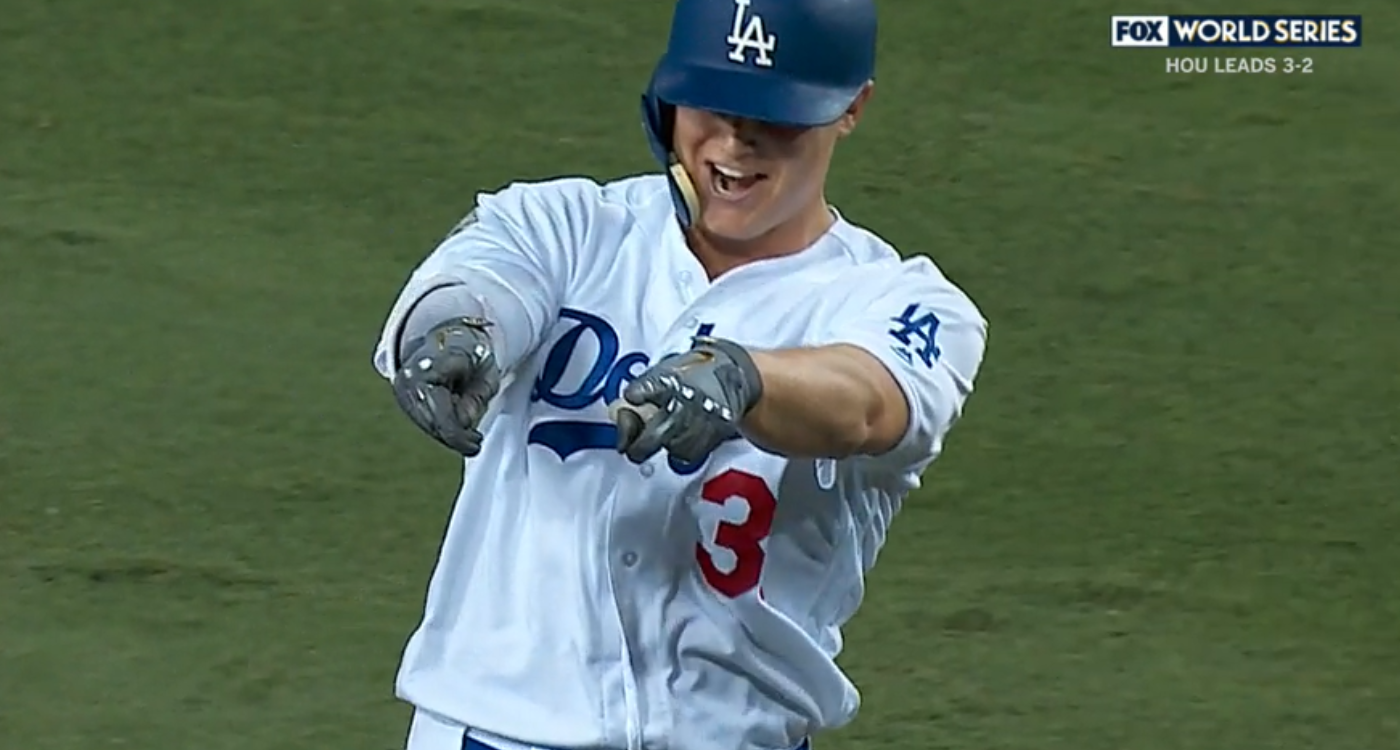 The Dodgers had their backs against the wall again, just like it was in Game 4 when they were down 2-1, except this time elimination was on the line and it was coming off an absolutely devastating loss in Game 5. Well, just like in Game 4, the Dodgers showed up ready to play and insured that we’d be getting a Game 7 thanks to a 3-1 victory.

Rich Hill was back on the mound for the Dodgers after his surprisingly controversial 4-inning, 60-pitch outing in Game 2. In that outing, Hill only gave up a run despite three walks and three hits, mainly because he was able to strikeout seven.

Well, tonight Hill had another short outing, and one that he was effective in as well. He surrendered just one run on a George Springer solo shot to right with two outs in the third. Springer jumped on a 1-0 fastball that was spotted well down and away, so you just have to tip your cap. Rich threw just 58 pitches in 4.2 innings before being removed, giving up just four hits and a walk (intentional) while striking out 5.

Hill’s removal was definitely something that could be second guessed. He had the fifth inning start with a single and a double, putting runners on second and third with nobody out, but Rich then struck out back-to-back batters. With the top of the order rolling around for a third time, an intentional walk was issued and Brandon Morrow was summoned.

The intentional walk left me confused because it left Morrow no room for error and opened the door for an absolutely massive inning with the heart of the order to follow. The pitching change was curious because the pen has struggled with fatigue unlike when a similar decision was made in Game 2, Hill’s pitch count was still low, and Rich still looked effective.

Nevertheless, the moves were made and they worked out, with Morrow inducing a ground out to escape trouble in the fifth. Brandon was also tasked with starting the sixth and he looked like his normal self, getting a ground out and a strikeout to start. However, he then allowed a single and was removed for Tony Watson due to handedness matchups. Watson promptly hit a batter to make the threat quite real, though he escaped thanks to a liner up the middle being caught to end the inning.

On the other side of things, Justin Verlander was also back on the mound for the Astros. While he limited the Dodgers to two hits and two walks in six innings last time, both of those hits were homers that accounted for three runs. This time he was sharp early, with a Yasiel Puig flare single in the second the only thing he allowed through five dominant frames.

However, the bats got to him in the sixth, thanks largely to the bottom of the order. Austin Barnes started the inning with a single, and Chase Utley followed by doing what he does best and got hit by a pitch to start a rally. Chris Taylor thankfully cashed in their only chance against Verlander, doubling the other way to score a run and tie the game.

Corey Seager followed by bombing one to right … that somehow fell short on the warning track for a sac fly.

So that got the Dodgers a 2-1 lead, but certainly not as big as they were expecting on that fly ball, especially after Justin Turner and Cody Bellinger followed by popping out and striking out, respectively. No insurance to be had.

Back to the Dodgers pen, Watson also started the seventh after getting out of the sixth and issued a walk to start things, including two borderline pitches that were not given despite a big zone all night. Honestly, I didn’t have a problem with the umpiring through the first four games, but these last two games have been erratic and atrocious.

Anyway, so Kenta Maeda entered in relief of Watson and immediately got a ground out, but then allowed an infield single to put him in trouble. Thankfully, he managed to escape the inning without damage after inducing a fly out and ground out.

After missing out on a chance to get insurance in the sixth, Joc Pederson thankfully took care of things in the seventh, liming a missile out to left for his third homer for the World Series to make it 3-1.

So happy for the guy, who takes a ton of shit from Dodgers fans. 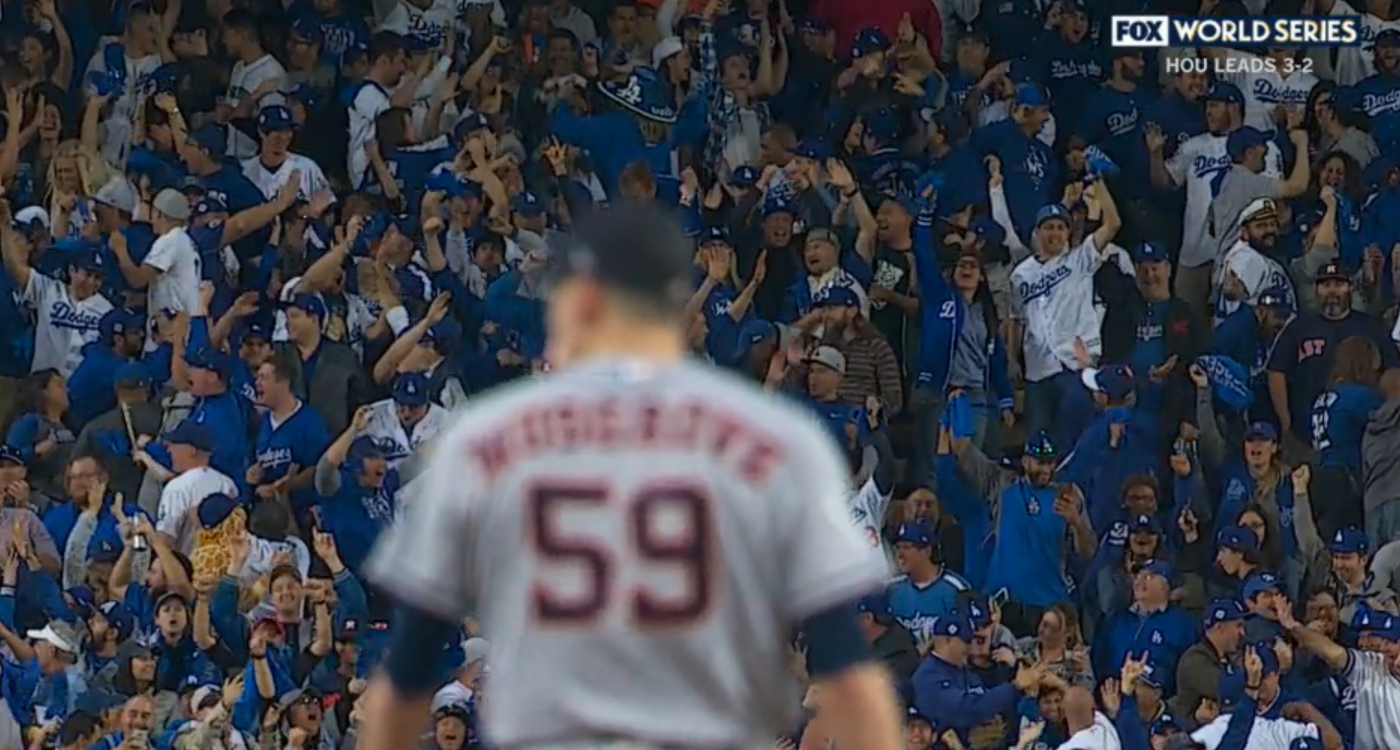 That provided a two-run lead in the eighth to … Kenley Jansen? Yeah, they were extending their relief ace for six outs again, which maybe logically is not the most sound decision, but I found it hard to disagree given the circumstances.

I want to disagree with going to Kenley already … but it's an elimination game. Worry about tomorrow if we get there, so hard to whine.

After struggling this series, Kenley got a 1-2-3 inning in the eighth and then a 1-2-3 innings in the ninth, throwing just 19 pitches and notching three strikeouts.

Tommy Lasorda with words of encouragement for tomorrow.

Yuli Gurriel got the welcome at Dodger Stadium he deserved.

The loudest boos of the World Series for Yuli Gurriel at Dodger Stadium. pic.twitter.com/HndrsCfNgQ

Rich Hill was very unhappy with Yuli Gurriel's gesture to Yu Darvish in Game 3. Hill stepped off the mound so the fans could boo more.

Here's why Rich HIll took his time on the mound to pitch to Yuli Gurriel: pic.twitter.com/Kk24OLTuAT

Thank you to FOX. pic.twitter.com/8hwR8c1JXf 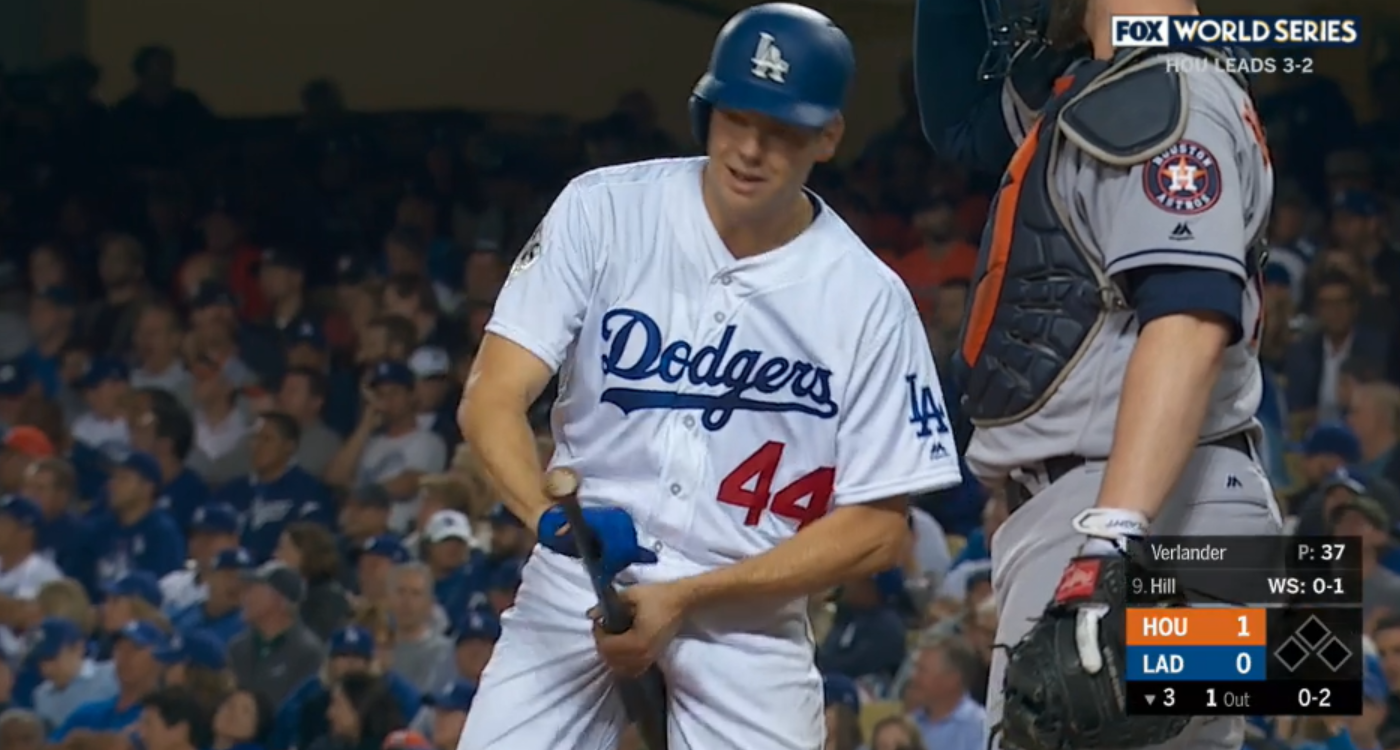 The Dodgers are now 10-4 in the postseason and this World Series is somehow tied at 3-3.

Folks, we have a Game 7 of the World Series tomorrow at Dodger Stadium. This is absolutely nuts. The mound matchup will be Yu Darvish against Lance McCullers, just like it was in Game 3, but this is gonna be quite different. Alex Wood and Clayton Kershaw will definitely be available for the Dodgers, while Dallas Keuchel, Charlie Morton, and Brad Peacock will likely be available for the Astros. It’s gonna be a glorious mess.