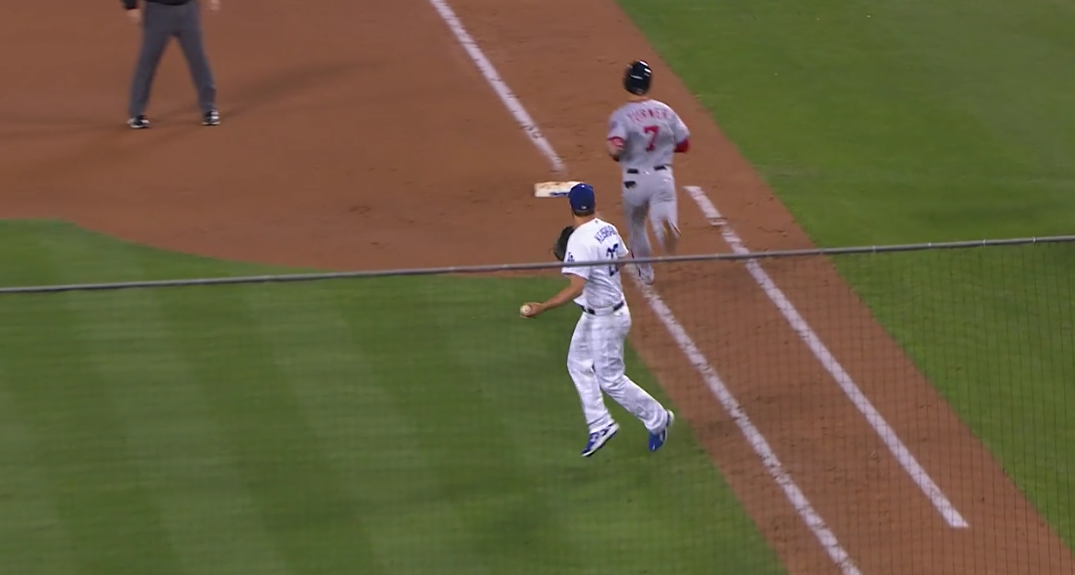 The Dodgers and Nationals are a pair of pre-season division favorites who both entered today’s matchup a game below .500. With Clayton Kershaw and Max Scherzer on the mound, the battle to reach .500 was on, and unfortunately it was the Nats who beat the Dodgers to it with a 5-2 victory.

Kershaw took all of three pitches to get into trouble today, as he started the game by allowing a double to Trea Turner, a productive fly out to Howie Kendrick, and a grounded single to Bryce Harper, all on the first pitch. That put the Nationals up 1-0 before the Dodgers knew what hit them, and after a longer battle against Ryan Zimmerman, he eventually doubled to double the lead to 2-0 in the 1st.

Following three consecutive 1-2-3 innings, he ran into trouble in the 5th after a lead-off double to Michael Taylor. With one down, Scherzer blooped a single into right-center and there were runners on the corners. The Nats then cashed in a run after Turner laid down a safety squeeze that ended up being a single thanks to nobody covering first, making it 3-0.

Things got even worse in the 6th, as three singles in the inning led to another run. Two of those singles came with two outs, including the one from Taylor that made it 4-0. After a 1-2-3 inning in the 7th, Kershaw’s night ended at just 85 pitches, and he struck out four and walked none in his seven innings, but gave up nine hits and four runs. Hard to live at 90-91 mph if the breaking pitches are up all game long.

Still, Scherzer didn’t actually fare much better. He started by allowing a triple to Chris Taylor on his first pitch, and then hit Corey Seager with the next. The difference is that he then got a pop-out back to the mound and two strikeouts to strand both runners and escape the 1st without damage. That would become a trend, as after an easy 1-2-3 inning in the 2nd, the Dodgers would fail with RISP in the next three frames. Yasmani Grandal grounded into a double play with one out and runners at first and second in the 3rd, Yasiel Puig struck out with a runner at second and two outs in the 4th, and Seager struck out with two outs and a runner at second in the 5th.

The 6th actually looked quite routine for Scherzer, as he started with back-to-back strikeouts. However, he then issued a walk to Joc Pederson and then a single by Chase Utley put the runners at the corners. Thankfully, Puig ended the woes of the bats with by lining a single to left, cutting the lead to 4-1.

At least all that traffic led to Scherzer being done after six innings, and the Nationals bullpen began the 7th by allowing an infield single to Austin Barnes and walking Taylor. Seager then struck out, but Yasmani came through with a sharp single to left to plate a run and make it 4-2.

Unfortunately any hopes for more were quickly dashed, as Cody Bellinger struck out in an at-bat where he saw like one strike, and Matt Kemp followed as a pinch hitter by grounding out weakly up the middle. Gross.

Pedro Baez then seemed to end any hopes of a comeback in the 8th after he loaded the bases with two walks and a bloop single, then forced home a run by walking Wilmer Difo, making it 5-2. To be fair, it would’ve never gotten to that point if Harper wasn’t given a walk despite striking out.

Adam Liberatore was brought in with two outs to get out of the inning and jam, and he did just that by inducing a pop-up. He was then tasked with the 9th as well, which is he got in 1-2-3 fashion.

I wish I could be this happy over the Dodgers cutting the lead to two in a mid-April game. pic.twitter.com/lxdzvOCk8Y

The four-game winning streak for the Dodgers comes to an end, as the Dodgers drop to 8-10 on the year and 4-6 at Dodger Stadium. Tomorrow’s matchup is Hyun-Jin Ryu against Stephen Strasburg at 3:10 PM HST/6:10 PM PST/9:10 PM EST, and unfortunately I have the recap for that as well.