Dodgers 2, Marlins 1: Buehler strong in debut, but Hernandez earns player of the game 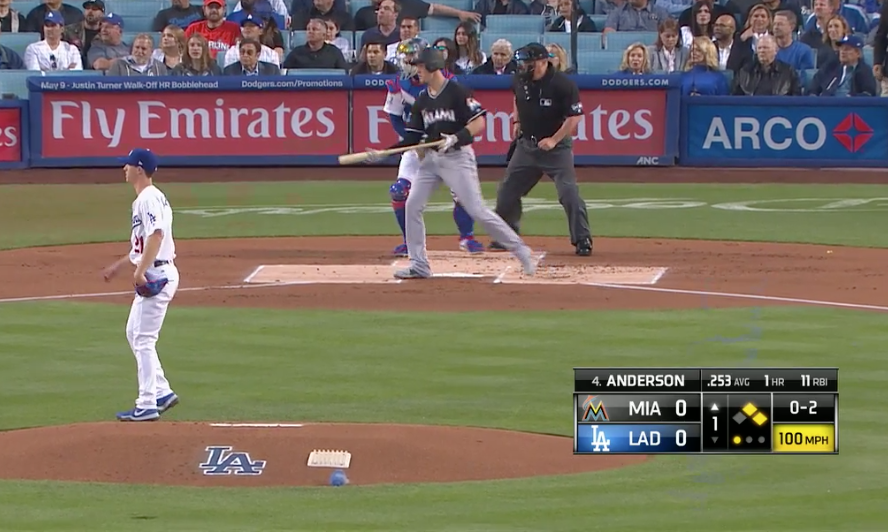 Going into tonight, the Dodgers were 7-7 against former manager Don Mattingly, and 10-10 on the year. They capitalized on the opportunity to get both of those to above .500 with a 2-1 win.

Of all 281 MLB pitchers who’ve thrown at least 150 pitches this year, Jarlin Garcia had the biggest gap between his Expected wOBA (.361) and his actual wOBA (.182). His xwOBA of .361 actually ranks 195th of 281, and his actual of .182 ranks seventh. Eventually, he’s going to perform closer to his expected numbers but it wasn’t tonight. The Dodgers offense mustered just one run on four hits against him. The Dodgers had five outs hit at 100 MPH+ tonight, none of which were on the ground. That’s … unlucky.

Walker Buehler had a strong debut, as his toughest opponent was himself. He fought his command for the majority of the evening resulting in his three walks and a high pitch count. He faced 21 batters, walked three, struck out five, and of the 13 balls put in play, 11 were on the ground. An 84.6% ground ball rate is definitely not sustainable, but the Marlins had a very tough time doing anything worthwhile against Buehler.

Chris Taylor walked on seven pitches to start the game, but Matt Kemp and Enrique Hernandez flew out on the first pitches they saw. Cody Bellinger followed up with another fly out to end an easy 13-pitch inning for Garcia. The second was a good inning, if you like the Marlins. Yasmani Grandal and Yasiel Puig both struck out looking on well placed changeups, and Austin Barnes grounded to short to end the frame. Garcia struck out the side in the third to keep his no-hitter going. Hernandez had been the player of the game so far on defense, and continued his excellent play by working a seven-pitch at bat ending with a solo home run to lead off the fourth. This was his third homer of the year, tying the team lead and also his first off of a LHP this year.

Garcia proceeded to get Kemp, Bellinger, and Grandal rather easily to end the inning.

In the fifth, Puig, Barnes, and Farmer all hit the ball extremely hard. However, after those three it was somehow two outs with only Barnes on base. Puig hit a 100 MPH liner to dead center for a lineout, Barnes hit a 103 MPH double to right-center, and Farmer hit a 101 MPH liner directly to third. Kemp also had a 104 MPH lineout to center earlier in the game. Max Muncy stuck out with Barnes on second, but Garcia wasn’t fooling anyone anymore. Garcia managed to trot through the sixth as well, allowing singles to Hernandez and Kemp but finding a way out of it as he has all season.

Tayron Guerrero took over in the seventh, walking Barnes but striking out the side while routinely touching 100 MPH. Taylor led off the eighth with a double against Kyle Barraclough and Hernandez followed by dropping a perfect bunt towards third, resulting in runners at the corners with no outs for pinch hitter Corey Seager. Seager struck out on seven pitches, which brought up Bellinger, who hit a 102 MPH lineout for a sacrifice fly. Grandal flew out to end the inning and his 11-game hitting streak, but the Dodgers were on their way to an above .500 record for the first time this year.

Buehler was strong to start the game, getting old friend Miguel Rojas to ground out on two pitches. However, he then gave up back-to-back singles to J.T. Realmuto and Starlin Castro. Realmuto’s was rocketed at 109 MPH, while Castro’s simply found the space between Farmer at third, and Hernandez at short. With one out, he struck out Brian Anderson looking with a perfectly placed 99 MPH fastball low and away. He walked Cameron Maybin on five pitches to load the bases, but was able to strike out JB Shuck to escape with no damage done, besides 26 pitches on the pitch count. If Castro’s weak grounder was hit at Farmer or Hernandez, it would’ve been a double play to end an 11 pitch inning, but you all know how baseball is.

Buehler was extremely close to an immaculate inning in the second, striking out Lewis Brinson and Yadiel Rivera on six pitches, before walking the opposing pitcher, Garcia. He got Rojas to ground out to Hernandez at short who made a spectacular play to end the inning. Buehler was through two with four strikeouts and only one walk, but his pitch count was already at 46.

Enrique Hernandez with a gem at short. https://t.co/qw8QM2Ts7d

Buehler got through his first 1-2-3 inning in the third behind strong command, and stronger defense behind him. Buehler threw only 11 pitches in the frame, with 10 for strikes, and an even better play from Hernandez to get Castro this time around. Not everyone can be as super utility as Hernandez. He could probably be a positive defender at five or six different positions.

Enrique Hernandez is easily the best defensive shortstop on the team. https://t.co/jsmL7Y2JHD

Maybin singled to lead off the fourth, but after Shuck flew out to left, Maybin was thrown out trying to steal second — Yasmani to Barnes for the catcher to catcher connection. After issuing another walk, Buehler induced a weak groundout to end the inning. Through four innings, the command and pitch count weren’t ideal for Buehler but he was sitting on a shutout which is a strong debut regardless. Buehler gave up a two out single to Realmuto again, but got through the fifth unscathed. His final line: 5 IP, 4 H (all singles) 3 BB, 5 Ks. 89 pitches and 55 strikes. He averaged 97 MPH on the fastball. According to ESPN Stats & Info, “Buehler threw eight pitches 99 MPH or faster tonight. That’s more than 16 teams have thrown ALL YEAR.”

Ross Stripling took the mound in the sixth, and walked Anderson to start things off, but managed six consecutive outs after that. JT Chargois came in for the eighth, and hit Realmuto to start off the inning. He then induced what should’ve been a double play, but on the turn, Barnes threw the ball four rows into the stands. Anderson singled up the middle to tie the game at 1, and then stole second two pitches later. Daniel just recently wrote about Chargois, and while Barnes did make an error it’s safe to say that Brim is at fault as well.

Adam Liberatore came in and cleaned up the mess, which was good to see. Josh Fields came in for his first save opportunity on the year, and got Derek Dietrich to ground out to Seager on another nice defensive play. He then proceeded to get Justin Bour to pop out, but Rojas singled bringing up the best hitter on the Marlins, Realmuto. Fields got him to fly out to center, securing the win 2-1.

Just a guy living in Southern California, having a good time writing about baseball. Hated baseball practice as a kid, but writing about it rules. Thanks for reading!
@AllanYamashige
Previous Marlins @ Dodgers April 23, 2018: Walker’s Starting DeBuehler
Next Dodgers composite Top 10 prospects