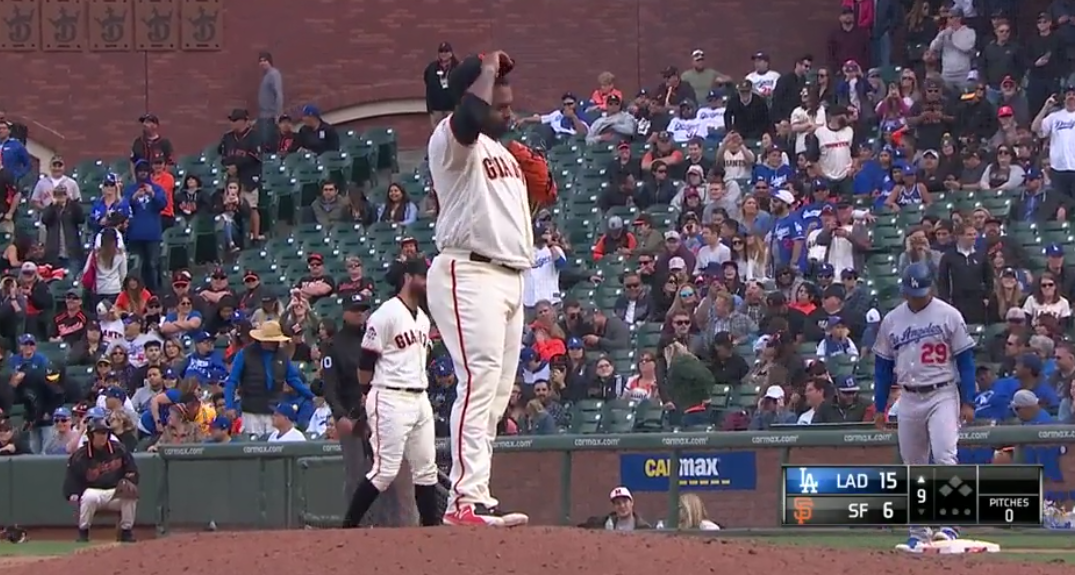 After understandable mass frustration and panic after losing a series to the Marlins and then blowing yesterday’s game against the Giants late, the Dodgers at least rebounded to start the doubleheader today with a convincing 15-6 win.

But honestly, who gives a shit when Pablo Sandoval pitched?

The Dodgers lineup took out all their frustrations today with a 20-hit, 6-walk attack that resulted in 15 runs, which feels like more than they’ve scored all year.

The bats got things started in the 1st with walks from Chris Taylor, Chase Utley, Austin Barnes, and Max Muncy and singles from Cody Bellinger and Joc Pederson, resulting in three runs crossing the plate.

The 2nd had more fireworks, as CT3 started things with a homer, Utley doubled, and then Bellinger and Joc hit back-to-back triples to plate another three runs.

In the 3rd, for the third consecutive inning, the Dodgers put up a crooked number. Muncy doubled to start, and with two outs, Utley also doubled and Seager singled to add two more runs to the team’s total.

After taking a break for a frame, the Dodgers came back in the 5th with more. CT3 notched a one-out single, stole second, and scored on a Seager two-out single to center to make it nine runs on the day.

The 6th was another crooked number, as Kyle Farmer struck a one-out double, Muncy followed with a single, and with two down Taylor singled and Utley doubled to make it 12 damn runs.

The 8th was another inning and it was also another crooked number. With two outs, Utley, Matt Kemp, and Belly all singled, and Joc doubled, and the Dodgers had another three runs to make it 15.

All of that was to back Walker Buehler, who made his second start and got his first win. He pitched well after a rocky first, surrendering only two runs in five innings. Throwing 94 pitches, he struck out six and gave up just six hits and a walk.

Most of his issues came in the first inning when he allowed three singles, two walks, a steal, and a wild pitch for both runs. For the most part, aside from the occasional wildness, Buehler was unlucky with the hits he allowed as he didn’t surrender much hard contact.

Out of the bullpen came Ross Stripling, who got a scoreless frame in the 6th. Pedro Baez, however, continued to be a dumpster fire. He recorded just one out, giving up three runs on four hits and a walk. Adam Liberatore got two batters to get out of the inning at least. Josh Fields then got the 8th and predictably gave up a homer, cause that’s what happens when you’re allowing like 90% fly balls, and Scott Alexander got the 9th without fucking up.

But folks, Pablo Sandoval pitched the 9th for the Giants. Truly blessed.

The greatest day in baseball history.

Not everything was good of course, because nothing can be for this team, so Yasiel Puig went down injured.

Alex Wood will take the mound against Johnny Cueto as the Dodgers hope to win a series or something.