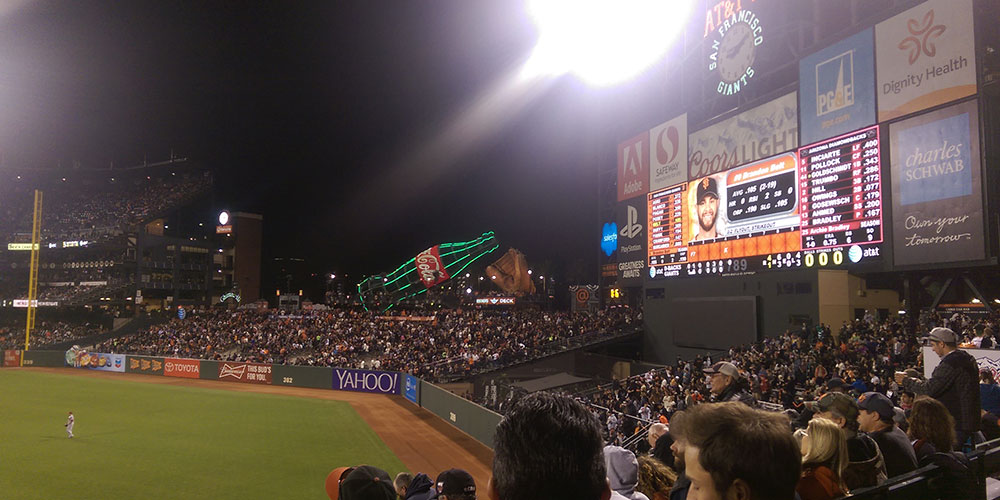 Hopefully the Dodgers saved some hits for tonight, as they should have a much tougher task in game two. The offense exploded for a season-high in both hits and runs in game one, despite being down to like one healthy bench player. The game was long, but the Dodgers won and Pablo Sandoval pitched, so it was worth it.

Alex Wood makes his sixth start of the season. The Dodgers lost each of his first three, but they’ve won his last two. Despite this, Wood is still looking for his first win of the season. Last time out, Wood allowed two earned runs (three runs total) in six innings against the Nationals. He owns the lowest K% of all Dodger starters (22.6 percent), but his 1.6 percent BB% is the second-best in all of baseball. Only two of the 115 batters Wood’s faced this season has drawn a walk, with both walks coming in his last two starts.

Wood’s first start of the season came against the Giants, and it was arguably the best start of Wood’s career. Wood allowed one infield single and worked around three errors in eight innings, but the Dodgers lost as they couldn’t score off Johnny Cueto and Kenley Jansen allowed a home run in the ninth. Since that first start, Wood hasn’t pitched more than six innings in a game this season. Ross Stripling, Pedro Baez, Josh Fields, Adam Liberatore and Scott Alexander were used in game one with Fields and Baez each throwing over 20 pitches.

Matt Kemp was supposed to be back in the lineup for game two and singled as a pinch-hitter in game one. However, that’s clearly not the case. Even if Kemp is available off the bench again, the Dodgers won’t have a full array of outfielders as Yasiel Puig is unavailable for game two. He ran into the wall to get Walker Buehler out of a first-inning jam and remained in the game, only to foul a ball off his foot, which required x-rays.

Much like in that previous matchup, Cueto gets the ball for the Giants. Cueto missed a little time with an ankle injury, but has arguably been the best starter in baseball when healthy. He’s allowed one earned run in four starts (26 innings), good for a 0.35 ERA. He currently owns the highest K% he’s had since 2014, when Cueto came in second-place in Cy Young Award voting. He also owns the lowest BB% of his career. It can’t all be attributed to AT&T Park, as three of his four starts have come on the road (Los Angeles, Arizona and Anaheim). His only start at home came against the Mariners, and it was the only start in which he’s allowed a run. That run came on a double, so much like game one’s starter Chris Stratton, Cueto enters the day without giving up a home run so far this season. Despite Stratton only lasting 1 1/3 innings in game one, the Giants only had to use three relievers as Roberto Gomez and Derek Law each ate three innings and Sandoval threw a 1-2-3 ninth. Sandoval only needed 11 pitches, so he could be available for tonight in a close game.

The Giants played without three healthy regulars in game one. Buster Posey, Evan Longoria and Austin Jackson are all back in their lineup.

A roster move that shortens the Dodger bullpen.

Scott Alexander has struggled hard with control so far and will be sent down. Alex Verdugo has been called up for the first time this season. Verdugo struggled as a September call-up last season, but Dustin’s third-ranked prospect figures to be a big part of the Dodgers’ future. Hopefully he gets as much playing time as possible while he’s up since it would be wasteful to have him up just to sit on the bench.

The roster move above may have been triggered by this news.

Sounds like Tony Cingrani will be available for game 2.

This doesn’t seem too wise. Tony Cingrani, who just yesterday got rocked and then taken out of the game with dead arm, played catch and reportedly felt fine. Let’s hope Cingrani doesn’t need to be used tonight. With Cingrani available and Alexander demoted, the Dodgers have two lefties in the bullpen (Cingrani and Liberatore).

The offense exploded in game one, which was only on SNLA. So now that game two is on SNLA and KCAL, expect a no-hitter.

I've been writing about the Dodgers since I graduated from Long Beach State, where I covered the Dirtbags in my senior year. I'm either very good or very bad at puns.
@@ac3581
Previous Dodgers 15, Giants 6: Pablo Sandoval pitched
Next Giants 8, Dodgers 3: What A Fucking Shitshow