Giants 8, Dodgers 3: What A Fucking Shitshow 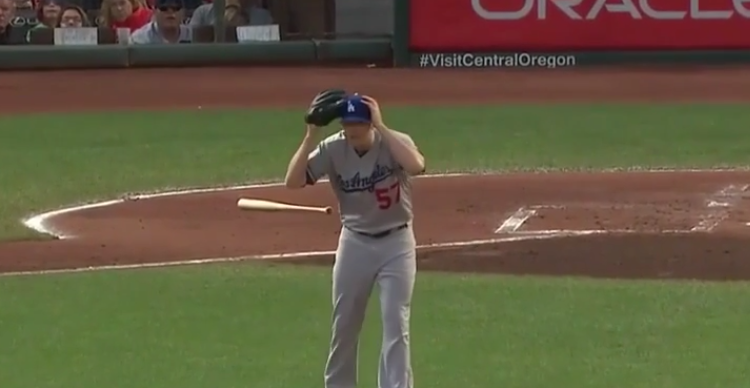 After taking the first game of the doubleheader by a score of 15-6, the Dodgers went back to their 2018 norm, dropping a tough game (to watch) to the Giants by a 8-3 score.

After putting up 15 in the day game, the Dodgers got off to a quick start yet again. Chris Taylor hit a double to start the 1st, and Corey Seager followed by bombing a dong to right for a 2-0 lead.

After a Yasmani Grandal single followed, Johnny Cueto then retired 12 batters in a row and didn’t allow another hit through six innings, with the only runners allowed being two walks.

Meanwhile, Alex Wood cruised through four innings, allowing just a single and facing the minimum thanks to a double play. However, the 5th proved problematic, as Wood allowed three consecutive singles to load the bases. None of those were hit hard, but he then threw a terrible change-up to Austin Jackson, which he yanked for a double to clear the bases and put the Dodgers in a 3-2 hole. The Giants then added an insurance run in the 6th thanks to a questionable walk that was cashed in with a 67 mph bloop single from Brandon Belt, making it 4-2.

Wood deserved better than four runs in six innings, but while he struck out four and only walked one, he couldn’t miss bats when he needed to. That led to many of his six hits (one double) even having a chance to begin with, and ultimately resulted in the loss.

The offense then proceeded to absolutely embarrass themselves in the 7th, which seems like a theme in 2018. Joc Pederson started things with a walk, Alex Verdugo added a single, and then Kyle Farmer walked to load the bases. Pinch hitter Austin Barnes then worked a 2-0 count and seemed in control. Except on that count, for whatever reason, he poked a grounder the opposite way like he was protecting with two strikes and grounded into a double play. It plated a run to cut the lead to 4-3, but after Taylor struck out, that was all the Dodgers got. Absolutely fucking terrible. Just a horrific sequence.

Daniel Hudson came out of the pen in relief of Wood, and gave up a rolled single and walked two to load the bases. Then, because he wasn’t facing Dodgers hitter, he gave up a double that drove in two and pushed the score to 6-3. JT Chargois came in and allowed a single to make it 8-3 before getting an out, then he got three more without adding more gasoline to the dumpster fire. Yay.

Dodgers offense didn’t do shit the rest of the game.

Alex Wood did this.

Alex Wood as the Dodgers regular season for like the past five years. https://t.co/s8ciytHCM2

Clayton Kershaw will be the fourth catcher.

Tomorrow’s game will be at an odd time of 11:05 AM HST/2:05 PM PST/5:05 PM EST and will have Kenta Maeda going to the mound against Ty Blach, who will throw a shutout.