The Dodgers (12-14) look to split the four game series against the Giants (13-14) with a win today. The doubleheader yesterday was fun during the first game, and then miserable for the second. Kenta Maeda (2-1, 3.10 ERA) takes the mound against the formidable Ty Blach (1-3, 4.31 ERA). The Dodgers bats always seem to come alive against Blach, so this one should be fun.

Enrique Hernandez is back in the lineup today, after missing both games of the doubleheader with flu like symptoms. Hopefully the whole team doesn’t get sick again like in Spring Training because that’s just what this team needs. It’ll be his first innings in right field this season with Yasiel Puig being moved to the DL. Besides that, it’s the standard three catcher lineup again, although the Dodgers best hitter, Chase Utley, is out of the starting lineup today.

Puig was placed on the DL, and while some would be disappointed that it’s not Pederson being sent down to AAA — Puig has posted a .500 OPS this year vs. Joc’s .812 which is fifth on the team. Clayton Kershaw has a .462 OPS, so Puig at the very least could use some time off to reset.

The starting pitcher matchup (rankings are of 128 qualified pitchers): 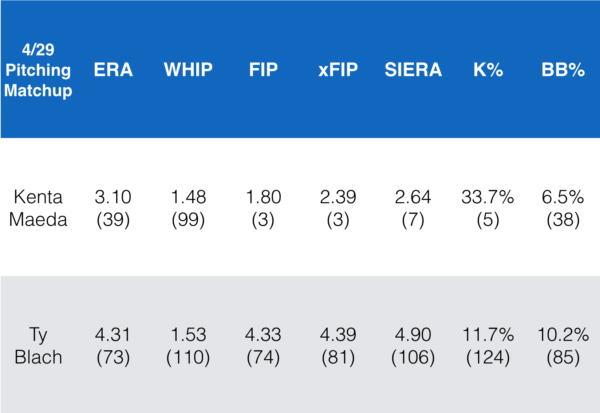 Blach has faced the Dodgers twice this year, and has allowed only one run over 11 innings, because of course. In his career he has a 5.14 ERA over 164 innings against all other teams, and a 1.90 ERA over 47 innings against the Dodgers. I really wish that wasn’t a real stat, but it is. Maeda has allowed no runs over six innings against the Giants on the year, and while effective has had a very interesting year so far as he’s been a mix of un-hittable and also … very hittable? His WHIP of 1.48 is alarming, but his walk rate is nearly the exact same as it’s always been. His 10.6 hits allowed per 9 innings are a career high for him, and ranks 92nd of 99 qualified pitchers. However, on the other end of the spectrum, his 33.7% strikeout rate ranks fifth of all starters. That’s really strange and it’s difficult to just “luck” into that many strikeouts. It’ll be interesting to see which version of Maeda comes back to the norm over the course of the year. Dustin and Brim both wrote about Maeda recently for different sites, and they’re both very well written and should be read. If you’re subscribing toTthe Athletic, you should probably ask Brim or Chad for a direct subscription link.

Hill might miss a couple more starts which will definitely piss him off, but it means that we get “Rich Hill is playing catch” tweets, which are always fun.

It will require some roster jiu-jitsu, but Walker Buehler is expected to start one of the games this weekend in Monterrey.

There have been a handful of roster moves recently and things can get confusing so I’ll do my best to consolidate it all. Justin Turner, Logan Forsythe, Hill, and Puig are on the DL. Wilmer Font was traded. Scott Alexander was sent to AAA, and Walker Buehler was sent back to Single-A. Replacing those guys currently are Max Muncy, Adam Liberatore, Alex Verdugo, and Brock Stewart. Puig heading to the DL opens some playing time for Verdugo, which is exciting, and with Hill’s DL stint extended — Stewart looks likely to start in his place.

Just a guy living in Southern California, having a good time writing about baseball. Hated baseball practice as a kid, but writing about it rules. Thanks for reading!
@AllanYamashige
Previous Giants 8, Dodgers 3: What A Fucking Shitshow
Next Giants 4, Dodgers 2: Early hole insurmountable for Dodgers