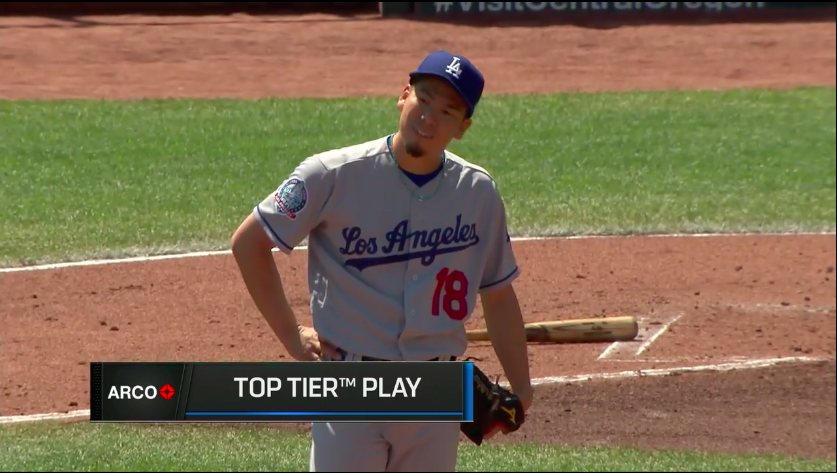 The Dodgers lost again, as a first-inning home run put the game out of reach. The Dodgers move to 12-15 on the season. They were 14-13 though 27 games last season, so while they’re still not super far off the pace, things are not good right now.

The highlight of first five innings for the Dodgers was Brim getting a shoutout from Joe Davis in the bottom of the fourth inning. Sure, Davis was referencing his piece from The Athletic, but honestly I’ll still take it at this point.

To perfectly capture the Dodgers’ 2018 so far, the Dodgers almost began to threaten in the fifth. Cody Bellinger led off the inning by crushing a double. Austin Barnes, who has been lauded for his professional approach and great eye at the plate, chased a terrible pitch to strike out. Kyle Farmer then hit a ball with a 97 MPH exit velocity and 10 degree launch angle (86 percent hit probability), and Brandon Crawford made a great diving catch and doubled up Bellinger to end the inning.

The Dodgers finally cracked Ty Blach in the sixth after a Chris Taylor one-out double, the first Dodger hit by not-Bellinger. After a flyout by Corey Seager, Enrique Hernandez knocked a single just past Crawford to plate the run. Matt Kemp singled to put runners on the corners, but Yasmani Grandal struck out to end the inning.

Because existence is pain for the Dodgers, Max Muncy replaced Bellinger at first base in the sixth inning. Bellinger remained on the bench during the inning, which is better than him heading back to the clubhouse with a trainer.

In the seventh, Muncy led off with an infield single that ended Blach’s night and brought Sam Dyson in. Muncy moved to second on a high chopper by Barnes, and scored on a pinch-hit two-strike single by Joc Pederson.

Hunter Strickland got the ninth for the Giants, his third appearance in the last three days after appearing on three straight days last week. His command was a little shaky, but he retired the Dodgers in order to secure the win and series victory for the Giants.

Dodger starter Kenta Maeda breezed through the first two outs of the first inning. Things fell apart quickly, as Buster Posey laced a double. Maeda looked to have a strikeout to end the inning, but home plate umpire Dan Iassonga had other ideas.

1 and 6 called as balls so pic.twitter.com/B793MztrDv

Brandon Belt drew a walk, and Maeda did not recover well. He nearly allowed a run-scoring double to Evan Longoria, but the ball hooked just foul. Two pitches later, Longoria crushed a slider to left-center for a three-run homer.

Maeda threw a 1-2-3 second inning thanks to a double play, but struggled similarly with two outs in the third. He issued a two-out walk to Posey and Belt hit a run-scoring double off the wall in right field.

Maeda got in trouble before getting two outs in the fifth, which might count as progress? Gregor Blanco hit a ball past a diving Hernandez to lead off the inning with a triple. However, Maeda got a strikeout, hard-hit groundout to third and lineout to Hernandez (on a nice diving catch) to strand the runner and get through five. Maeda issued a two-out walk in the sixth, but despite his early struggles he got through six innings in 96 pitches.

Adam Liberatore allowed an infield single in the seventh, but picked him off for a 10-pitch 1-2-3 inning. JT Chargois followed suit with a scoreless eighth, so at least in today’s game the bullpen wasn’t terrible.

The Dodgers look to get back in the win column with a four-game series in Arizona beginning tomorrow. The Diamondbacks have won each of their nine series this season and have beaten the Dodgers in five of their six meetings, outscoring the Dodgers 36-23. First pitch Monday is scheduled for 6:40. Tomorrow’s starter is still unknown, and will either be Ross Stripling or Brock Stewart.

I've been writing about the Dodgers since I graduated from Long Beach State, where I covered the Dirtbags in my senior year. I'm either very good or very bad at puns.
@@ac3581
Previous Dodgers @ Giants April 29, 2018: Maeda vs. Blach
Next Frustration, tension, disappointment all describe first month of Dodger baseball