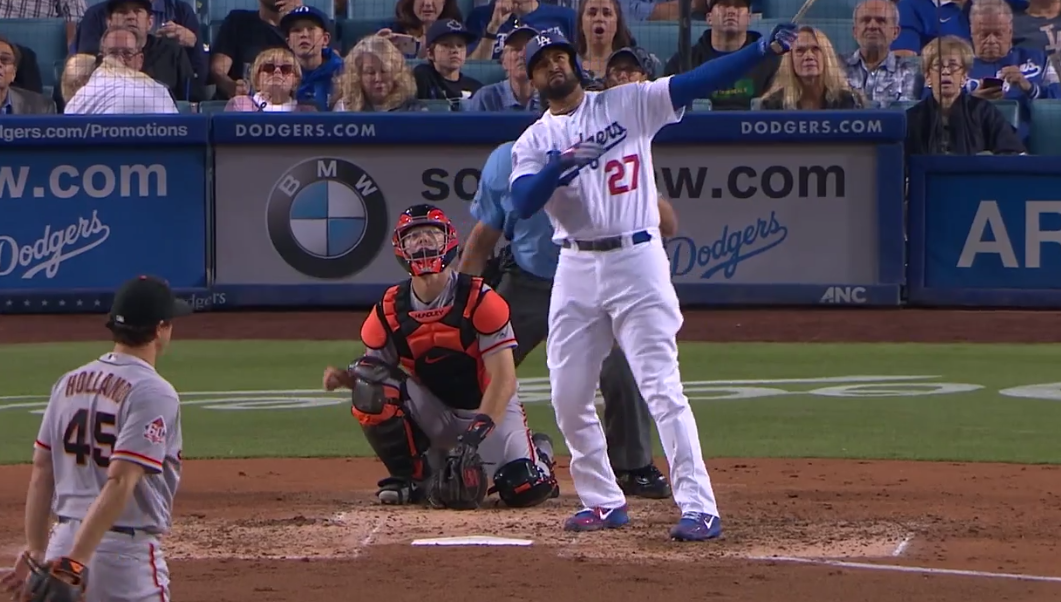 The Dodgers stayed hot to start the series against the rival Giants, relying on their new ace and the long ball in a 3-2 victory. The Dodgers now have 20 wins in their last 26 games, which is not quite the prolific streaks of recent years, but is what they needed.

The aforementioned ace is none other than Ross Stripling, and he was well on his way to another stellar start through six scoreless innings. Highlighting his stuff was him handling one of the hottest hitters in baseball in Brandon Crawford.

Unfortunately that didn’t carry all the way through, as in the 7th he allowed a single to Andrew McCutchen and then a blast to Pablo Sandoval on what looked like a slider that was off the plate away.

I don't think it was even a strike. pic.twitter.com/2t3miMwq1Q

That spelled the end of his night, and he allowed just those two runs in 6.1 innings on 89 pitches. Stripling continued to build an impressive K/BB ratio with six strikeouts to no walks, and limited the Giants to four hits.

Meanwhile, the offense didn’t have one of their banner days, but they did at least score. Enrique Hernandez got things started early in the 1st with a lined solo shot to left-center, his ninth on the year.

The bats waited until the 4th to do anything else, and it was none other than Matt Kemp who got the party started with his 11th of the season, a towering shot to center.

Things then got weird for what would eventually be the winning run, as Yasmani Grandal hit a ball to the warning track that was dropped and chugged his way to third. Yasiel Puig then followed with a double to right-center to plate him.

After Stripling exited, the Dodgers pen continued to do their job. Josh Fields, now seemingly back to normal with his velocity, got out of the 7th and got two outs in the 8th without allowing a runner before being removed. Scott Alexander then entered for a lefty-lefty matchup and did his thing, inducing a weak dribbler back to the mound.

That brought on closer Kenley Jansen to seal the deal, and his cutter was definitely doing that today. Kenley induced a pop-up to the catcher, a strikeout, and a high bouncer to second for a 1-2-3 inning and the win.

When things are going your way, they go your way.

The Dodgers will do it again on FOX tomorrow night at 2:15 PM HST/5:15 PM PST/8:15 PM EST. Alex Wood will continue pitching hurt and try to also be effective for the Dodgers against Madison Bumgarner, who is looking to regain his old form.

"A highly rational Internet troll." - Los Angeles Times
@ChadMoriyama
Previous Giants @ Dodgers June 15, 2018: Holland vs. Stripling
Next Max Muncy has his own shirt thanks to Joe Davis, Dieter Ruehle, and … the Beastie Boys?