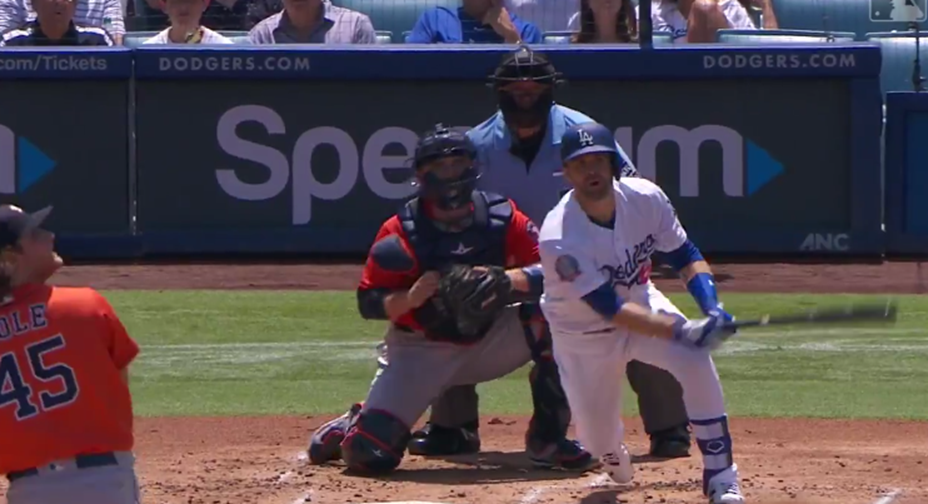 Depending on how you want to spin it, the Dodgers were either 5-5 in their last 10 games or 2-5 in their last 7, and I think most would opt for the latter after a frustrating first game against the Astros and then getting absolutely humiliated in the second game. Fortunately, they bounced back tonight against one of the best starters in baseball, winning 3-2 to salvage some of their pride at least.

Walker Buehler‘s first pitch was crushed by George Springer over the wall in center, almost as a continuation of things last night. While he also gave up a solo homer in the 5th to Tony Kemp, he generally settled in nicely, giving the Dodgers 91 pitches in his 5.1 innings. Aside from the two solo homers, Buehler gave up just two more hits and two walks, striking out eight batters in his outing.

Buehler pitched well, but he did exit with two men on and just one out, which brought on Dylan Floro and his sinker. It proved a wise choice immediately induced a ground ball for a double play to escape the jam. Floro was also tasked with the 7th, and while he hit the first batter, he struck out two in the inning and didn’t encounter any further trouble.

Fortunately, today the Dodgers offense actually struck back somewhat. In the 1st, following a Joc Pederson walk and a Manny Machado single, Brian Dozier came up with two outs and double to left-center on a ball that glanced off Springer’s glove to plate two.

In the 3rd they added another behind a Machado single and a Cody Bellinger double to left-center.

Unfortunately, after that blow, the offense managed just a double and a single the rest of the game. That put it on the pen to get the job done, and as has already been mentioned, fortunately Floro was on his game. Scott Alexander was next in the 8th, and he got the inning in three batters, albeit grounder, walk, and ground ball double play.

Not that I buy into the pen (yet), but finally having guys who don't rely on 90% fly balls is nice.

That set things up nicely for Kenley Jansen in the 9th. Things started … not great after a single started the inning, but he then got a pop out to first, a fly ball to center, and a strikeout to end it.

The Dodgers improve to 62-51 on the season and with the Diamondbacks losing are now once again tied for the lead in the NL West.

After a day off tomorrow, the Dodgers will head to Oakland for a matchup against the red-hot Athletics, starting at 4:05 PM HST/7:05 PM PST/10:05 PM EST. Rich Hill will look to continue his run of excellence on the mound, and he’ll face Sean Manaea, who has been brilliant all year outside of a stretch in May.