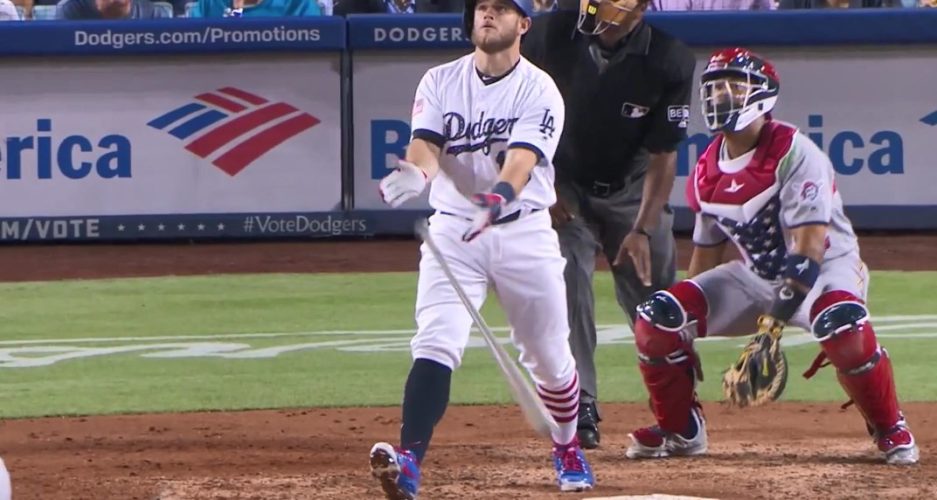 Before we go to far, let me just say this clearly and with no equivocation:

MAX MUNCY PARTICIPATING IN THE HOME RUN DERBY HAS NOTHING, ZERO, NADA TO DO WITH HIS RECENT STRUGGLES.

Muncy’s struggles can be traced back to a number of things, but the thing that stands out most is the fact he’s chasing. A lot.

I wrote about Muncy’s incredible run back in June and attributed it to his plate discipline.

“(Jeff) Sullivan would go onto praise his strike zone judgment, and that’s a big part of the breakout. Joe Davis mentioned on the broadcast last night that Muncy, over the last couple weeks, hadn’t been seeing a lot of strikes, but he also hasn’t been chasing pitches outside the strike zone. He has the 5th-lowest chase rate in the last couple weeks, but he has actually seen a lot of pitches in the strike zone (44.5 percent, 70th-highest in MLB). But if you go out to the last 30 days, Muncy has the lowest chase rate in the game (16 percent). He also has a similar 44.6 percent Zone% (43rd). This has translated into a season-long theme for Muncy. Among players with 150 or more plate appearances (he’s at 157), he has the 7th-lowest chase rate at 19.4 percent, which is better than guys like Mookie Betts (20 percent), Andrew McCutchen (20.2 percent) and Alex Bregman (20.3 percent). His swinging strike rate is also a solid 7.8 percent (the two correlate to one another).”

Since then, everything has trended the wrong direction. His chase rate (O-Swing%) has jumped about 3.5 points and is currently at 22 percent. It’s still one of the 14 lowest chase rates in baseball, but there has been a troubling correlation outside of his swinging strike rate jumping 2 points. 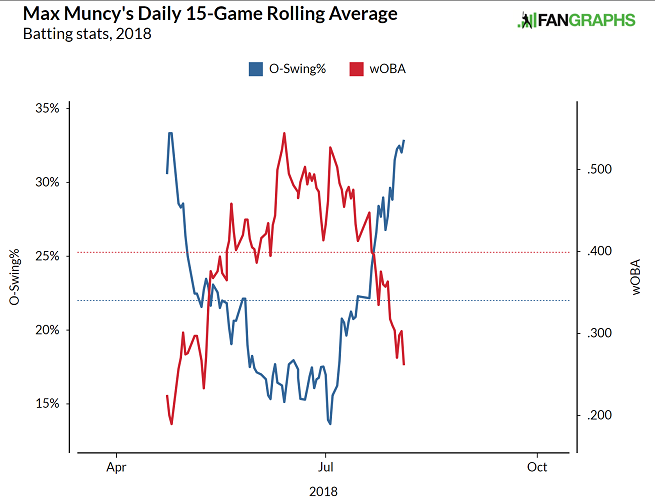 During his hot streak, his O-Swing% dipped incredibly low. Conversely, his wOBA was incredibly high. But as his O-Swing% has increased in the last month-plus, his wOBA has decreased. It’s almost a perfect correlation. What’s wOBA? I’ll let Quakes’ manager Drew Saylor explain it succinctly and clearly.

wRC+ compares player to his league. wOBA describes the type of hits.

Of Muncy’s 10 hits in the second half, three are doubles, one is a triple and two are home runs. But the fact remains, he’s not getting enough hits for it to really impact his wOBA (.288 in the second half; league-average is .315).

Muncy’s No. 1 skill at the plate is his plate discipline. Pitchers have adjusted to him since his hot streak, and he has yet to adjust the other direction. He’s pressing to hit well, which is leading to decreased plate discipline and diminishing results at the plate.

He’s in such a rut that he might start losing playing time. He’s hitting lefties better than righties, so it wouldn’t be a surprise if he started to sit every now and then against a right-handed pitcher (especially if Alex Verdugo comes up for Yasiel Puig and/or Matt Kemp goes on the disabled list). Of course, that could lead Muncy to stay in the lineup since the options behind him (save maybe Andrew Toles) aren’t terribly appealing. It could also lead to a lineup that includes Chris Taylor in center field, Brian Dozier playing second base every day and Cody Bellinger moving back to first base.

Muncy’s incredible first half hasn’t been forgotten, but we also knew he was never going to be that good over the course of a full season.

One doesn’t just lose plate discipline, so it’s reasonable to expect him to regain it at some point and pull out of this tailspin at the plate. But if he doesn’t, the Dodgers might have to reduce his playing time a bit.

Dustin Nosler began writing about the Dodgers in July 2009 at his blog, Feelin' Kinda Blue. He co-hosted a weekly podcast with Jared Massey called Dugout Blues. He was a contributor/editor at The Hardball Times and True Blue LA. He graduated from California State University, Sacramento, with his bachelor’s degree in journalism and a minor in digital media. While at CSUS, he worked for the student-run newspaper The State Hornet for three years, culminating with a 1-year term as editor-in-chief. He resides in Stockton, Calif.
@DustinNosler
Previous Dodgers 3, Astros 2: Doubles from Dozier & Bellinger provide offense as series is salvaged
Next Podcast: ‘Dugout Blues’ episode 242 – Trade deadline, Puig/Kemp hurt, Ethier