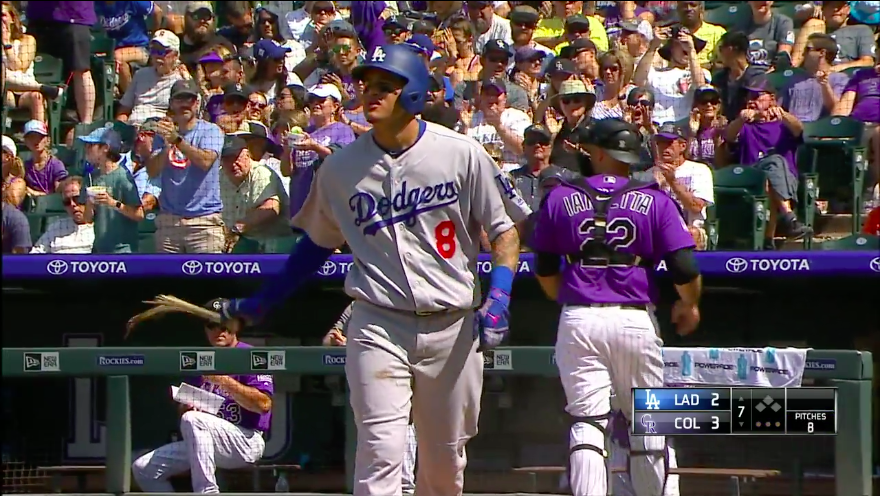 Chad Bettis entered the game with a 5.67 ERA in 100 innings pitched this season. He … lowered that today. However, the Rockies bullpen is bad, so the Dodgers tied the game. Unfortunately, the Rockies walked off for the second straight night, this time on a bases loaded walk with two outs in the ninth.

After a scoreless top of the first for the Dodgers, the Rockies struck first. Charlie Blackmon hit a popup that Chris Taylor dropped, and a passed ball allowed him to go to second. DJ LeMahieu grounded Blackmon over to third, and a sac fly drove him in.

Each pitcher dialed in after allowing baserunners in the first inning. Brian Dozier led off the game with a single, but Bettis retired the next 10 Dodgers before Yasiel Puig singled with one out in the fourth. Cody Bellinger followed that up with a single, but Matt Kemp and Taylor failed to drive in a run.

Rich Hill held the Rockies without a hit until the fourth inning, when LeMahieu led off with a double. David Dahl followed a flyout with an RBI single to score the run and ended up on second on a Puig throwing error. Puig redeemed himself shortly after, throwing Dahl out trying to take third on a fly ball to end the inning.

The Dodgers squandered another opportunity in the fifth after Bettis issued a pair of walks, with Manny Machado flying out to end the threat. After another scoreless inning from Bettis, the Rockies took a 3-0 lead as Blackmon led off the bottom of the sixth with a solo home run against Hill. Hill finished the sixth, thanks to some help from an outfield assist by Kemp.

Bettis issued a one-out walk in the seventh, which prompted Bud Black to remove him from the game after 85 pitches. That matches his third-fewest pitches thrown in a game this season, so maybe that was a bit of a quick hook?

Either way, Jake McGee relieved Bettis. He struck out Muncy, but Justin Turner poked a pinch-hit double to put two runners in scoring position. Scott Oberg came in to face Dozier, who laced a single to center to make it 3-2.

Oberg got Machado to end the inning, but the Dodgers finally showed some life. Bettis’ final line was quite good. He went 6 1/3 innings and allowed three hits and one earned run. He only struck three batters out and issued four walks, but the Dodgers still couldn’t do much against him.

John Axford was the first Dodger reliever to appear and tossed his first perfect inning as a Dodger, picking up two strikeouts. He touched 99 on the SNLA radar, which seems good.

Puig led off the eighth with a single off Adam Ottavino, and Bellinger followed it up with a single off the wall to put runners on the corners. Kemp hit a sac fly to center to score Puig and tie the game. Bellinger stole second, but the Dodgers left him there.

Axford remained in for the eighth inning and took a comebacker off his shin for the first out. He remained in the game and got Nolan Arenado and Blackmon to ground out to end the inning. Axford had a disastrous start to his Dodger career, but since allowing a leadoff triple on Friday, he’s retired the last nine batters he’s faced.

Wade Davis got the ninth for the Rockies and got the first two outs in two pitches, but walked Dozier. Dozier then stole second and took third a few pitches later, but Joc Pederson grounded out to end the threat.

Dylan Floro was tasked with getting the Dodgers to extras, but allowed a leadoff single to LeMahieu that Puig bobbled into a double. Floro got a strikeout and intentionally walked Dahl. After another groundout, Ryan McMahon was also intentionally walked, preventing a game-winning hit from him for a third straight game. The intentional walks loaded the bases, which led to the Dodgers getting shrimped.

The Dodger bats went cold in Colorado, which is not what you want. After scoring eight in the first game of the series, they scored nine runs over the next three games. The bullpen is an issue without Kenley Jansen, but the offense did them no favors in this series.

I've been writing about the Dodgers since I graduated from Long Beach State, where I covered the Dirtbags in my senior year. I'm either very good or very bad at puns.
@@ac3581
Previous Dodgers @ Rockies August 12, 2018: So Long, Satan Field
Next Dodgers are under-performing, and it’s almost too late in the season for that