Alex Wood is a reliever now, which is for the best

No pitcher has thrown more innings than Alex Wood has for the Dodgers this season. Last season, Wood made the same number of starts (25) as Rich Hill and Kenta Maeda, but threw more innings than each of them and posted a career-best 2.72 ERA. As the lone qualified starter for the Dodgers to this point, Wood has the 30th-best ERA and the 21st-best FIP among qualified starters in all of baseball. By no means is Wood an ace, but most teams would love to have him as their third-best starter.

And yet he’s now not even a starter.

Ross Stripling will start on Sunday. Alex Wood is moving to the bullpen.

This move might seem a bit reactionary, as Wood got beaten up in his last outing. Against the first-place (I assume) Reds on Monday, Wood allowed seven runs (six earned) and eight hits in 3 2/3 innings while striking out six batters. Three days later, Wood is out of the rotation. Ross Stripling will start Sunday against the Cardinals, leaving Wood in the bullpen for the final couple weeks of the season.

Here’s a look at how the rotation shapes up, barring change (replace Wood’s name with Stripling, shoutout to David for doing this so I didn’t have to).

By pushing Kershaw out of tomorrow's day game, the Dodgers ensure that he faces St. Louis, Colorado and Arizona in his next three starts, instead of Cincy, Colorado and San Diego. Here's how the rotation seems to shake out, barring any further shenanigans: pic.twitter.com/Yiep1Wz4oo

This move out to the bullpen robs Wood of three potential starts: Sunday at St. Louis, Saturday on September 22 against the Padres, and Friday on September 28 at San Francisco. He’s averaging a little over 5 1/3 innings per start, meaning he’s losing out on about 16 innings in those three starts. However, it arguably gives the Dodgers the chance to start their five best starters for the rest of the season while strengthening their bullpen.

Despite some recent struggles, the Dodgers strength has been their pitching staff this season. The Dodger rotation has the second-best team ERA (3.26), third-best FIP (3.44) and fourth-best FWAR (15.1) in Major League baseball. That WAR number is especially impressive considering Dodger starters rank 15th in the majors in innings pitched.

Among Dodger starting pitchers, Wood has the fifth-best ERA and sixth-best FIP. By those numbers, it’s obvious that Clayton Kershaw, Hyun-Jin Ryu, Walker Buehler, and Stripling should be in the rotation. This leaves Maeda, Wood, and Hill vying for one more rotation spot.

Maeda had already been moved to the bullpen, so that last rotation spot is between Wood and Hill. I DARE you to try to convince me that a man that wore a D. Mountain uniform in a sanctioned Major League Baseball game deserves a demotion of any kind. 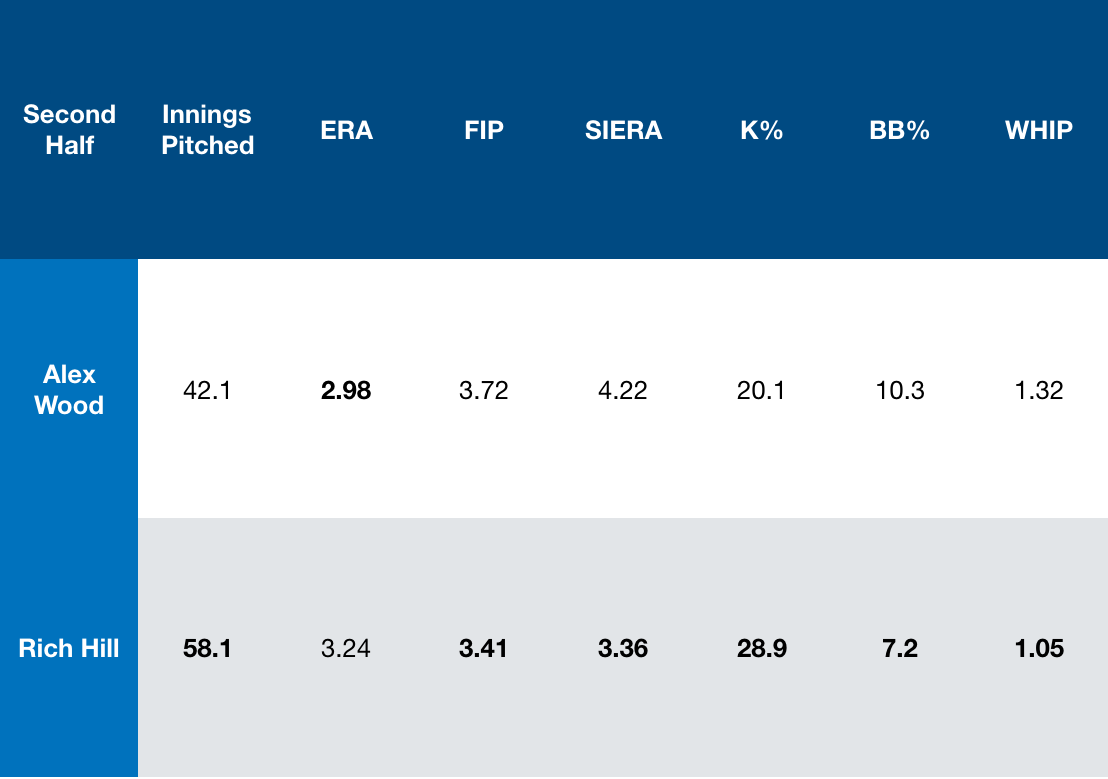 Wood still has the ERA advantage, but Hill leads everywhere else, and in many cases it’s not all that close. Wood has the worst strikeout rate, walk rate, FIP, and SIERA of all Dodger starters in the second half, so it’s not far-fetched to think that he isn’t one of the five best options to start a baseball game right now for the team.

For the first time in a few years, these September games actually count for more than home-field advantage throughout the playoffs. The Dodgers need their best guys starting, and right now Wood arguably isn’t one of them. That’s not really an insult, as the Dodgers have a very good rotation. Instead, Wood will join a bullpen that already has a few long arms. If the Dodgers make the postseason (I hate that that’s an if), Wood’s spot on the roster might be in the pen anyway.

It’s been a couple years since Wood has appeared out of the bullpen. He did so four times in September 2016, and allowed one hit and one walk in four innings during that time. Before that, he appeared out of the bullpen 29 times in 2013 and 2014 as a member of the Braves. In 46 1/3 career innings as a reliever, Wood has held opponents to a .218/.276/.301 triple slash and he’s posted a 2.53 ERA/2.34 FIP. His walk rate is slightly higher than in his time as a starter, but his strikeout rate is nearly also more than five percent higher. Those numbers should be taken with a grain of salt as only four of those innings have come in the last four years.

Wood offers the Dodgers another lefty out of the bullpen, joining Scott Alexander, Caleb Ferguson, Zac Rosscup, half of Pat Venditte, and sort of Julio Urias. Venditte’s finally been getting some shine of late, but Alexander, Ferguson and Rosscup are the main candidates for the playoff bullpen (is Tony Cingrani alive?). 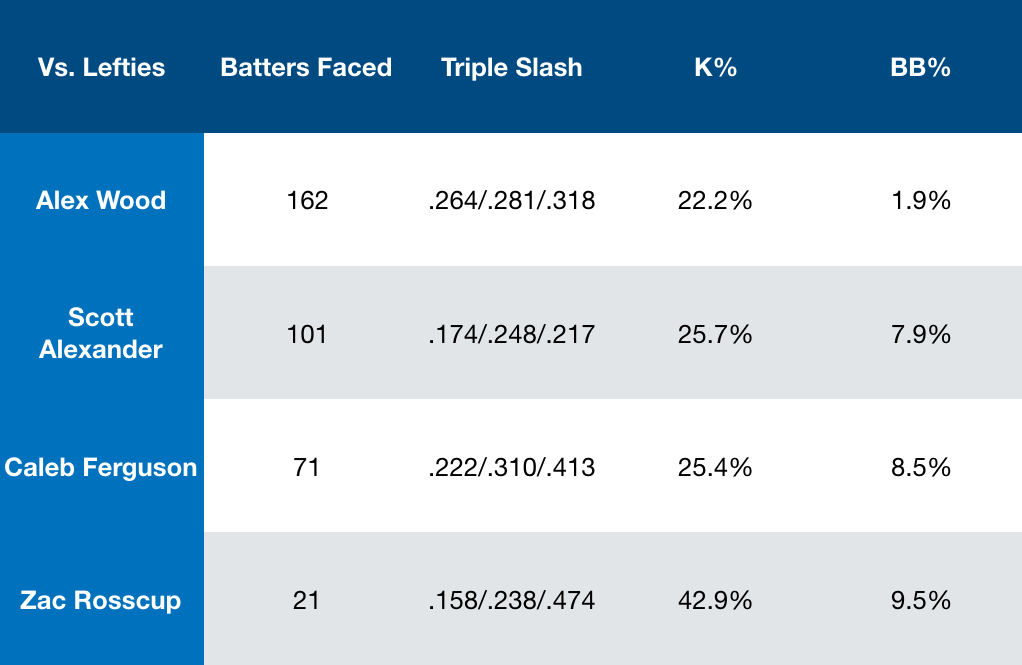 Rosscup might not be a serious candidate for the playoff bullpen, but I had to include that 42.9 percent strikeout rate against lefties (nine strikeouts in 21 plate appearances). Alexander should really be used against lefties, as other than his walk rate his numbers against lefties are pretty dominant.

Wood’s walk rate really jumped out at me. This season, he’s issued a walk to three left-handed batters. Against lefties, Wood owns a .342 BABIP despite only a 29.3 percent hard-hit rate. Wood’s known as a ground ball pitcher, and he gets lefties to hit the ball on the ground 57.5 percent of the time as opposed to righties, who hit grounders 46.1 percent of the time off Wood. That said, there’s one stat to be very wary of with bullpen Wood. Unlike most starting pitchers, Wood’s biggest struggles come the first time through the order. 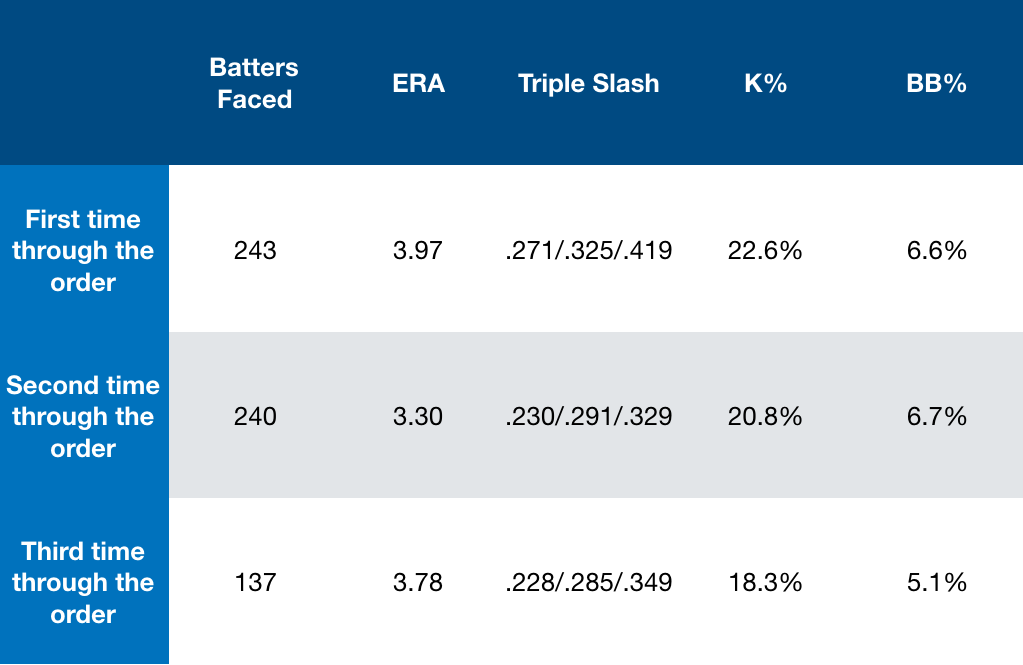 Wood’s best strikeout numbers come early in the game, but batters tend to hit him hardest the first time they see him. A .331 BABIP doesn’t do him any favors the first time through the order, but it checks out with a 41.2 hard-hit rate. Wood will have to be better first time through the order to succeed out of the bullpen. Hopefully his velocity plays up in relief, since an 89.9 MPH sinker coming out of the bullpen in the playoffs will cause a lot of stress.

Whether it was deserved or not, Wood is the newest member of the bullpen. The Dodgers now arguably have their five best starters starting the final 15 games of the season, and Wood could strengthen a bullpen that has been mostly solid of late. He probably isn’t thrilled about the move to the bullpen, but it should give the Dodgers their best chance to make the postseason.

I've been writing about the Dodgers since I graduated from Long Beach State, where I covered the Dirtbags in my senior year. I'm either very good or very bad at puns.
@@ac3581
Previous Dodgers 9, Cardinals 7: Platoon lineup mashes for Kershaw, who does enough to win
Next Dodgers @ Cardinals September 14, 2018: Rookie Rematch