Dodgers 9, Cardinals 7: Platoon lineup mashes for Kershaw, who does enough to win

In their last three series, the Dodgers have beaten the Rockies but have fallen to the Mets and Reds, so it was hard to get a read on how this Cardinals series might go. Well, they got things off to a good start, as the much-maligned platoon lineup exploded early and the Dodgers did enough to hold on in an 9-7 win.

The Dodgers offense is underachieving this year, but platoons seriously haven’t been the problem. They went with another extreme lineup today, and it paid dividends immediately. Chris Taylor started things in the 1st with a single, and with one down Manny Machado followed with a single of his own, and both later advanced on a wild pitch. That brought up David Freese, who capped off a 14-pitch at-bat with a triple to left.

He covered almost literally everything. 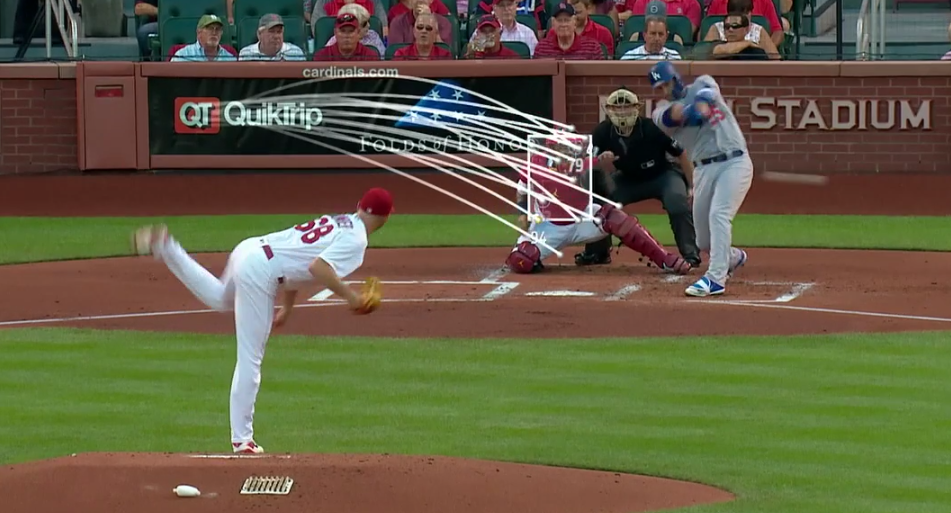 Matt Kemp immediately cashed in another run with a bloop single to right, staking the Dodgers to three early runs, which sure seemed like something the team desperately needed to take pressure off.

Thankfully they didn’t stop there, as Justin Turner and Manny started the 3rd with back-to-back doubles to plate another run. But it was the 4th that blew things open, as three consecutive singles from Enrique Hernandez, Austin Barnes, and Clayton Kershaw led to another run scoring. Slash bunt? Slash bunt.

Taylor then followed by pummeling a ball to right-center for a double, driving in yet another run and putting men on second and third with nobody out.

The bats then did a bit of manufacturing, as JT and Machado both hit fly balls to center for sacrifice flies and two more runs, driving the total up to eight.

Obviously that’s always a good thing, but it’s especially reassuring when Kershaw takes the mound. After a bit of a rough start in the 1st, when he gave up a run on a double and a single to start things, Kershaw got 13 of the next 15 batters. Manny helped a bit.

Not Manny people can make it look this easy. pic.twitter.com/Pd7BSMPZXv

Fortunately, he settled as Kershaw tends to do and got through six innings. While he did give up four runs (three earned) on eight hits and two walks, he also struck out eight and I thought he was better than his line.

Manny continued to help Kershaw in the 7th, mashing his 34th dong of the year to center for a 9-4 lead.

Kenta Maeda got the 7th and started the 8th in relief, and while three of his four outs were strikeouts, he continued to struggle. Kenta gave up a run on a double and two singles to cut the lead to 9-5. Caleb Ferguson entered to get the rest of the inning, and he did so by inducing two fly balls.

Kenley Jansen then entered in the 9th, making his second appearance since September 5. Things didn’t go quite as planned, as the inning started with a walk and then a jam-shot single. While he got a pop out, he then walked the bases loaded to bring the tying run to the plate. Kenley then induced a potential double play ball, but got only the out at second, and Manny’s desperate throw (runner was gonna be safe anyway) got past Cody Bellinger for an error and two runs ended up scoring to make it 9-7.

That brought up Matt Adams, Dodgers nemesis, with the chance to tie it, and thankfully he grounded out on the first pitch to end the game.

The victory gets the Dodgers to 80 wins on the season, it’s just unfortunate it took them 147 games to get there. It also keeps them within 1.5 games of the NL West leader in the Rockies (won).

Definitely felt like today was a game the Dodgers had to win to have a chance in this series, but tomorrow’s matchup of Walker Buehler and John Flaherty is more of a tossup, and it’ll start at 2:00 PM HST/5:00 PM PST/8:00 PM EST.

"A highly rational Internet troll." - Los Angeles Times
@ChadMoriyama
Previous Dodgers @ Cardinals September 13, 2018: Dodgers look to Freese the Cardinals Devil Magic
Next Alex Wood is a reliever now, which is for the best