Dodgers 3, Rockies 2: Chris Taylor with a dramatic walk-off dong in the 10th 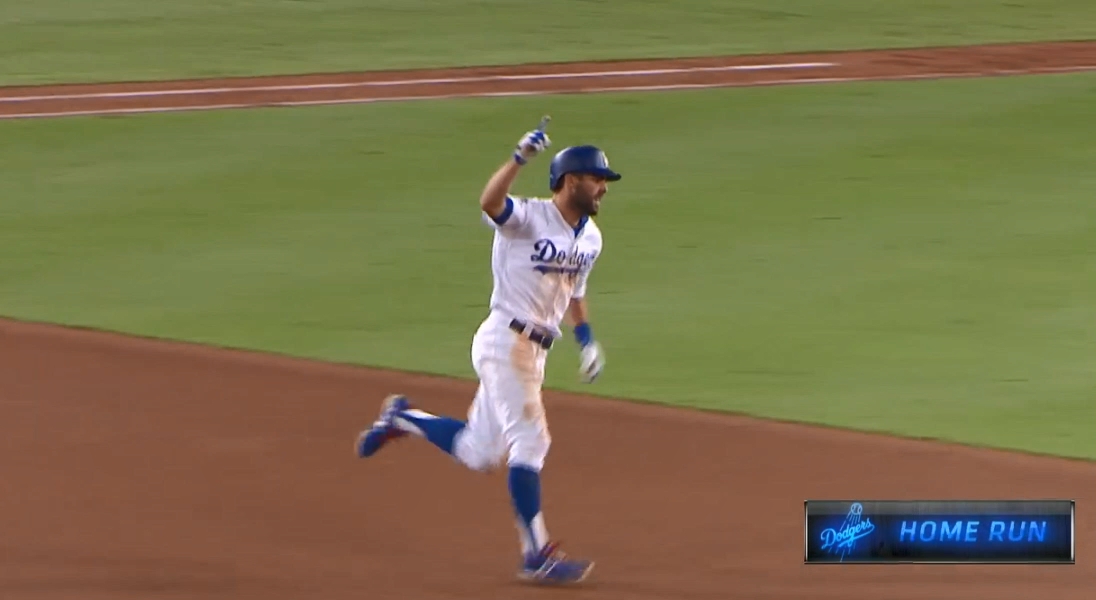 There’s only so many ways one can say that this series with the Rockies is massive, and things got off on the right foot for the Dodgers when they won the series opener. Tonight was a sloppy but tense affair throughout, but in the end the pen came up big, holding on long enough for a walk-off dong in a 3-2 extra-inning win.

The Dodgers struck first in the 1st, this time behind a two-out rally instead of the long ball. Manny Machado hit a ball off the very top of the wall in center for a double, and a wild pitch as David Freese walked led to runners at the corners. Matt Kemp, whose start over Yasiel Puig was rather questionable, singled to right to drive in a run but was sloppily caught off first to end the rally. That would be a trend.

After two perfect innings, Clayton Kershaw got into trouble in the 3rd. There eventually were two down but also two on thanks to uncharacteristic walks on his part. But Kershaw seemed to work out of it by inducing a routine grounder to Justin Turner, but he just whiffed on it for an error to allow a run to score. Chris Taylor then also let the ball get past him for another error on the same play, putting runners on second and third. Clayton wriggled out of it without further damage, but things were messy early and his pitch count was up.

In their half of the 3rd, the Dodgers started things promisingly with a CT3 walk, but he was erased on a JT deep fly to left. Taylor tried to tag up and get to second but was gunned down by a perfect throw for a double play. Less than ideal.

Kershaw continued to not look sharp in the 4th, allowing a single, stolen base, and walk, but managed to get out of trouble again. He wasn’t so lucky in the 5th, as Charlie Blackmon crushed a no-doubter to right-center to put the Rockies up 2-1.

The Dodgers managed to get it right back in their half of the 5th, albeit in a surprising way. Austin Barnes walked, Kershaw bunted right onto the plate, but Chris Iannetta lost the handle on a potential double-play ball and could only get Kershaw at first. CT3 then followed with a dribbler to third for an infield single that ended up scoring a run after Nolan Arenado threw it away for an error to make it 2-2. Nice read by Barnes, by the way.

Oh yeah, part of the reason the toss got away is the umpire set a screen. 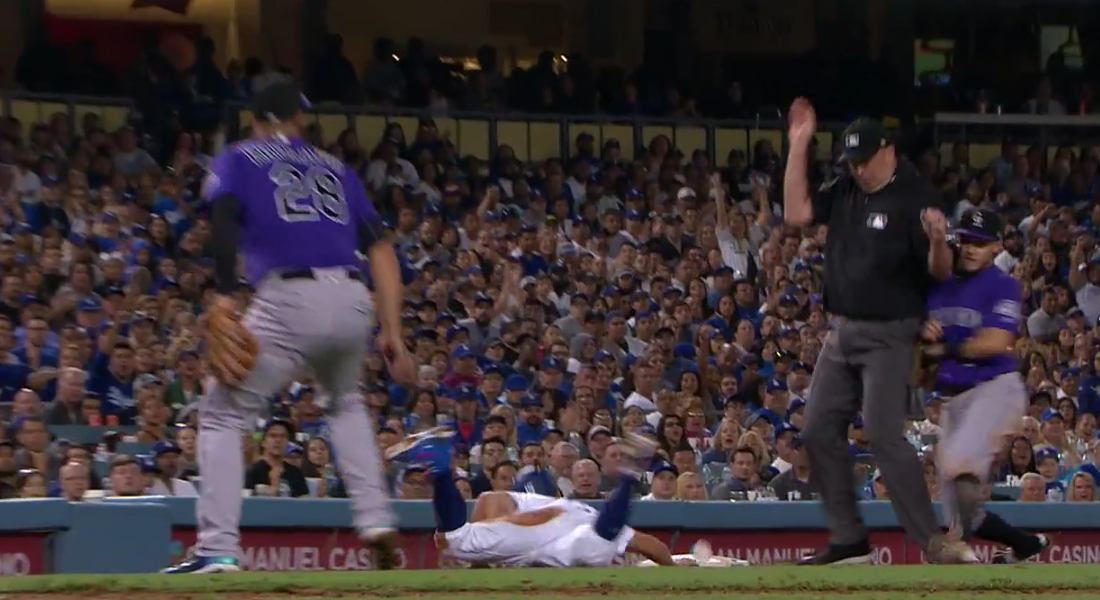 Despite all the struggles, Kershaw pitched into the 7th, but was on the ropes with two outs after another two walks. Dave Roberts decided to trust his ace, and I’m not sure it necessarily was the right call, but it worked out thanks to JT’s outstanding diving play to preserve the tie.

That was it for Kershaw, who threw 97 pitches in the seven frames, giving up only three hits but a surprising five walks and only striking out three. Yet for all the traffic and sloppiness, he gave up just two runs and only one was earned.

As the bats continued to struggle, Kenta Maeda was assigned the 8th, looking to round into form in his role as a reliever. He was nearly literally flawless, striking out the side in order on 10 pitches.

Kenley Jansen took over in the 9th, and things were tense throughout thanks to a lead-off single and a stolen base. However, he rebounded with a strikeout, infield pop, and a grounder to escape.

That took things into extras, and Scott Alexander started the 10th against the best hitters the Rockies had to offer. Alexander got Charlie Blackmon to ground out and his job was done. Dylan Floro entered and got both DJ LeMahieu and Arenado to strikeout, looking as nasty as he ever has.

With one down in the 10th, and facing the Rockies best reliever in Adam Ottavino, Taylor got behind 0-2 and everybody was thinking, “Oh, surely another strikeout.” But CT3 worked the count back to 2-2, and then got a hanging slider that he crushed to left for his 17th dong of the year … a walk-off dong.

I am extremely here for this.

But make sure nobody misses Max Muncy screwing up the cooler dump.

A potential sweep is on for tomorrow night, with Walker Buehler coming off the best start of his career facing Tyler Anderson at 4:00 PM HST/7:00 PM PST/10:00 PM EST.