Rockies @ Dodgers September 18, 2018: Kershaw vs. Freeland in a battle for first place

The Dodgers (83-68) made a big statement on Monday night with a decisive 8-2 home victory over the Rockies (82-68) to take over sole possession of first place in the NL West by a half game. Hyun-Jin Ryu was dominant over seven scoreless frames, and the Dodgers’ offense roughed up Jon Gray. The second match in the series between the two NL West rivals will feature a battle of the aces as Clayton Kershaw and Kyle Freeland both look to pitch their respective team closer to a division title.

Kershaw (8-5, 2.51 ERA, 3.05 FIP) will make his 40th career start against Colorado. Despite Walker Buehler‘s rise to prominence and a decrease in fastball velocity, Kershaw’s still the ace of the team. He’s held opposing batters to a .589 OPS over his last 10 starts with a 10.67 strikeout-to-walk ratio in that dominant stretch. Kershaw is the guy you want on the mound in an important game like this. In his career, he’s 22-7 with a 3.21 ERA against the Rockies with 10 K/9 and 267 strikeouts in 241 innings.

Several Colorado hitters have found some success against Kershaw including Nolan Arenado who is 16-for-52 (.308) with three doubles and three home runs against him. Carlos Gonzalez has hit three home runs against Kersh as well, although he’s not in the lineup. The always pesky Gerardo Parra is 13-for-38 (.342) with three doubles, a triple and a home run vs. the veteran lefty. As a team, the Rockies are slashing .273/.334/.464/.798 against left-handed pitching.

Kershaw started off a bit shaky in the first inning of his last start against the Cardinals, but he settled down and allowed four runs (three earned) on eight hits and two walks with eight strikeouts in six innings. The offense picked up Kersh, the platoon lineup exploding early in the 9-7 win.

The big story, pun intended, to hit the baseball interwebs today was the Rockies’ loss of their star shortstop Trevor Story. Story left the game last night with elbow discomfort, and this is a huge blow for Colorado who are vying for their first franchise division title. Although this helps out the Dodgers who have been without Corey Seager the entire year, you never want to see a talented player like Story go down like this in the middle of a heated division race.

It turns out it’s not as bad as it first seemed.

Tests on Trevor Story’s elbow reveal inflammation but NO ligament damage. He’s expected to be back in a few days. #Rockies

The Dodgers are hitting .239/.324/.408/.731 against southpaws this year, and they’ll have to beat one of the best in the league in Kyle Freeland (15-7, 2.96 ERA, 3.77 FIP) to maintain their first-place standing in the division. Last time the Dodgers faced Freeland on September 8, things didn’t go well. The offense only mustered two runs in the loss, and they only had one plate appearance with a RSIP against the Cy Young candidate. The only run they managed against him was off a solo dong by Chris Taylor in the fifth inning. Taylor’s leading off and in left field.

The feast or famine nature of the Dodgers’ offense, with a formidable lefty on the mound, likely means they’ll have trouble plating any runs even after slugging eight the night prior. That means Kershaw will need to be even more stingy, and the bullpen will have to be at the ready to hold a close game. Knowing my luck, and baseball’s frustrating way of flipping the switch on all of us on a nightly basis, it’ll be a 17-15 dong fest or something.

Justin Turner owns Freeland and is 11-for-20 (.550) with three doubles and a triple. Yasiel Puig, whose OPS is now up to .833 on the year (the same as his final OPS mark last year), has also hit two homers against Freeland. All of a sudden Puig is batting .273 and slugging .500 on the year with a 1.403 OPS so far this month. Puig is licking and peaking at just the right time.

Over at FanGraphs today, Jay Jaffe wrote about the enigma that is Puig this season, including a turnaround in his struggles against LHP this year.

“Fastballs aside, if there’s good news, it’s that Puig’s post-DL uptick, which lasted through an additional 19-day absence in July due an oblique strain, has included a more passable performance against lefties, in the form of a .234/.305/.436 (99 wRC+) showing in 105 PA.”

Puig went 2-for-4 with two singles in the series opener, and his recent remarkable offensive outburst has everyone’s attention.

All that being said, Puig isn’t in the starting lineup. Now, I don’t usually complain too much about the lineups, but this one’s a head scratcher since Puig has hit Freeland decently in the past and Matt Kemp is 1-for-11 (.091) with five strikeouts against him. Kemp’s also had trouble against LHP as of late with a 50 wRC+ since the All-Star break compared to Puig’s 86 wRC+ vs. LHP in the second half. In this game in particular I don’t understand continuing with the platoon. Maybe it’s because it’s Kemp’s bobblehead night. Prove me wrong, Matty.

Anyhow, if you’re enjoying #MaximumPuig as much as I am, you should show it off by ordering one of these awesome shirts here. 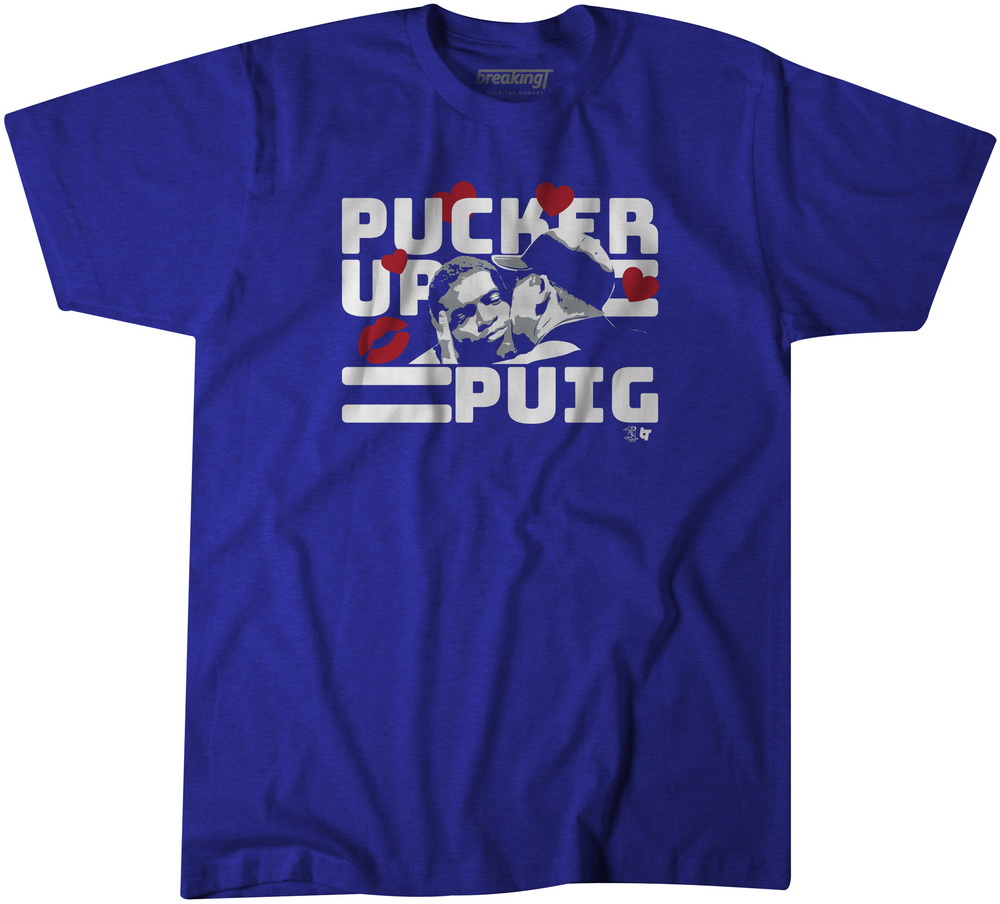 Stacie Wheeler, born and raised in So Cal, has been writing about the Dodgers since 2010. She wrote daily as the co-editor of Lasorda's Lair for five long years, and she has also written for Dodgers Nation, Dodger Blue 1958 and The Hardball Times. She currently contributes to True Blue LA. Stacie graduated from the University Of Southern California with a bachelor's degree in Cinema-Television. You can also watch her videos on her YouTube channel, DishingUpTheDodgers.
@StacieMWheeler
Previous Turner Ward returning the kissing favor to Yasiel Puig is now an awesome shirt
Next Dodgers 3, Rockies 2: Chris Taylor with a dramatic walk-off dong in the 10th