Two years ago, the Dodgers and Red Sox made the biggest trade you’ll ever see. Time to update the old scoreboard! Setting aside the dollars for a minute, here’s how the Nick Punto trade stands at the moment, 24 months on. The charts below contain only production given directly to the Dodgers and Red Sox since the day of the trade, and since some of the players have since moved on to other clubs, this is not the full accounting of what they have done since.

I should pause here to point out that trade evaluations are never quite as simple as “adding up the WAR,” because while the Dodgers come out considerably ahead there, that was always going to be the case — the players they were acquiring were intended to help immediately, while the Red Sox were getting rid of some problems and gaining talent for the future. Also, Sands and De Jesus were part of a trade later that year that brought the Red Sox Joel Hanrahan and Brock Holt from Pittsburgh, so that worth can’t be entirely discarded.

Still… if you had shown me this chart two years ago and said this is how it was going to play out, I think I’d have been pretty happy with that. Beckett added some decent starts in a 2012 playoff push, had a completely lost 2013 (eight mediocre starts before a season-ending injury), and was a savior in 20 2014 starts before getting hurt just ahead of regression coming to find him. Punto, for all the “grit” jokes, proved to be a very valuable infield backup in 2013. Crawford has been at times one of the best Dodger hitters — see April 2013, and playoffs 2013 — surrounded by continuing injuries and stretches of awful, but of course at the time of the deal, he had just undergone Tommy John surgery and no one had any idea what to expect from him. Gonzalez, meanwhile, has been something less than the star he’s paid to be, but has been an above-average second-tier first baseman. 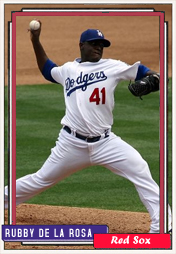 There’s context involved in all of this, of course. You could argue that if Crawford weren’t around, perhaps Joc Pederson would be. If Beckett weren’t signed for this year, maybe the team would have gone harder after another starter last winter, which they could desperately use right now. Some like to say that if not for Gonzalez the Dodgers could have had Jose Abreu, and perhaps that’s true, but there’s also no guarantee at all that Abreu wouldn’t have still ended up with the White Sox, leaving the Dodgers with… who, at first base? Ike Davis? Garrett Jones?

Really, when the deal was made, my biggest concern was that not only had the Dodgers agreed to take on a quarter-billion dollars worth of risky money, but that they’d also agreed to send two of the organization’s better pitching prospects to do it. I still worry about that a little, because neither de la Rosa or Webster have even seen their 26th birthday yet, but neither look better now than they did two years ago, and Webster in particular looks considerably worse. De la Rosa, at least, has made 13 decent starts this year, and still has that big arm we all loved, but Webster has been a complete mess in parts of two seasons in the bigs, showing no ability to throw strikes.

From a player exchange point of view, this worked out really well for the Dodgers.

Of course, it’s not just about players. It’s about the huge salaries the Dodgers took on. Beckett is done after this year, but Crawford is still owed $62.25m over the next three seasons, and Gonzalez $85m over the next four. Both are already 32 years old, and while Crawford has been productive at times, it’s difficult to see him sticking around in Los Angeles and producing for three more seasons after this. Most likely, he’s dealt somewhere for pennies on the dollar, still costing the Dodgers money while adding no additional on-field value. If you consider that the Dodgers have already paid approximately $130m to the quartet through the end of 2014 for something like 15 wins, that’s a bit above market value, though closer than I would have thought, but it’s easy to see the return on the remaining money decreasing from here on out.

Then again, you should only care about money if the team does, and the Dodgers clearly do not. I still don’t think that this was the most effective way to spend $262 million and some good prospects, but nor has it been the disaster some predicted it would be. The Red Sox haven’t seen much talent from the deal, but that was also never really the point for them, and some of that financial flexibility helped them win a 2013 title. You can’t possibly see Boston wishing they had not done this deal. The Dodgers probably don’t feel that way either. Maybe that’s the best evaluation of a deal worth doing.